Another traditional Christmas movie that has a humanitarian message is the ever popular”It’s a Wonderful Life”. I’m sure you’re all familiar with this movie but have you ever thought about the wonderful messages it holds considering humanity. It is the story basically of a family man named George Bailey who is the most unselfish person that ever lived. He would do all he could just so other people could be happy. When the movie opens this great guy who happens to have a wife and four small children is considering suicide on Christmas Eve and we wonder why? He is assigned a guardian angel named Clarence to show George how different and awful life would be if he had never been born. It also makes George realize how much he has done for others and comes to appreciate his life and will discover that all of the good that he has done all throughout his life is going to be richly rewarded by the people in his small town. We arrive on the scene and it is Christmas Eve in the small town of Bedford Falls, New York which does not really exist however when considering this movie director Frank Capra visited Seneca Falls, New York in 1945 and decided to model Bedford Falls after this town which now holds an annual ”It’s a Wonderful Life” festival each December. They have a hotel named after George’s guardian angel The Hotel Clarence and have opened up the”It’s a Wonderful Life” Museum. 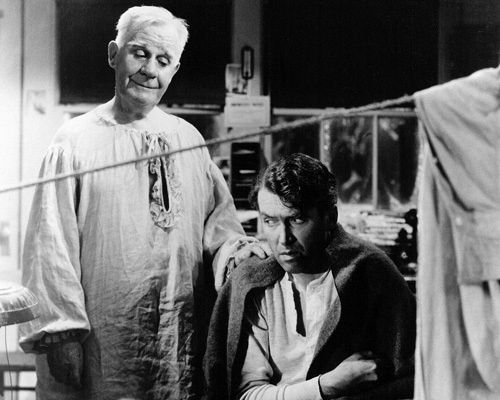 On this special night, as it is Christmas Eve, the angels in Heaven above have received special prayers from George’s friends and family who are worried about this selfless and wonderful young family man. Two head angles have a discussion and make the decision that George needs a guardian angel and since Clarence needs to do something special in order to get his wings they decide he is the right one to send on this mission. However, neither Clarence nor we know anything about George and so the two head angels review his life for Clarence. It appears that our chosen humanitarian was just twelve when he started to help others.

Are there not times when we see someone doing something wrong but because they are not part of our family or not our friends we just keep quiet. I don’t mean a situation like the one in this film, nothing that serious but any other incident. I’ve seen young mothers hitting their small children about the head or owners abusing their pets I’m sorry to say I’ve always considered doing something but because it was none of my business I’ve done nothing. Thinking I could’ve warned them or said something to make them stop. Perhaps it’s time in this world that we tried to right the injustices and the wrongs if we possibly can and you know just as with George it might save a life or two. It’s time to consider – have we ever put ourselves first when we shouldn’t have? George’s big dream has been to graduate from college and travel around the world but because of his father’s business the Bailey Building and Loan which provides home loans for poor workers he is stuck. So he puts all his hopes on his younger brother Harry to graduate from high school and take over the business so George can go on to school. Things don’t always go according to plan and on Harry’s graduation night their absent-minded Uncle Billy calls to say that their father has had a fatal stroke. As a result of which makes Mr. Henry F. Potter the richest man in town and a slumlord and majority shareholder in the Building and Loan try and get the board of directors to stop giving home loans to the working poor. And George? Well, he, of course, convinces them that that would be a terrible injustice that these people really need and depend on these loans. In fact, at this point in the movie, I cannot help but think that if the story of Ebenezer Scrooge had occurred in the same century as the story involving Mr. Henry Potter then they could have been cousins. However, the major difference is that Scrooge chooses humanity, in the end, this rich man never does. Finally, the board of directors are willing to accept George’s proposal not to stop the business but only if he himself runs the Building and Loan. Here we see George despondent but ever with a heart of gold. He gives Harry his college money and delays his own plans until Harry finishes college and can take over the business. I wonder if anyone knows someone who would have such a large heart. I sadly fear that a lot of people have become too much involved with themselves to see the needs of others. Does it finally work out for George? Unfortunately not. When Harry does graduate he arrives home with a wife and an offer of a great job from his father-in-law. George doesn’t argue and he doesn’t demand that Harry take over so that he can finally fulfill his dream instead he tells his brother who is willing to decline the generous offer he has been given that Harry mustn’t do so and that he will keep full ownership of the Building and Loan. It goes to show us that there are people who would do anything for others even up to the point of sacrificing their own hopes and desires. Do you know of any? I have met perhaps two such people in my life and this world needs so many more like this. Does George finally have some happiness? Yes, he does. He falls in love with a hometown girl who returns from college. In this young woman George actually truly finds his equal which makes their love special and genuine. They get married and as they drive past the Building and Loan on the way to their honeymoon this couple sees that there is a run on the bank and it is in danger of collapse. Of course, this is the work of Henry Potter and it makes his image so much more”Scrooge-like”. And what of George’s wife? She is definitely not of the usual mold. Between the two of them, they have $2,000 for their honeymoon and George’s wife Mary agrees to use this money in order to satisfy depositors’ immediate needs putting off their honeymoon until a later time. However, a later time won’t be coming as the years go by and George and Mary find themselves raising four children. At this time in steps the greedy and rotten Potter. George has begun the project of an affordable housing project called Bailey Park and Potter tries to stop him by offering a $20,000 salary and the possibility for George to travel. However, unlike other people who would succumb to temptation George realizes that by accepting this most generous offer he would be letting Potter get the upper hand and closing down the Building and Loan and finally taking over all of Bedford Falls.