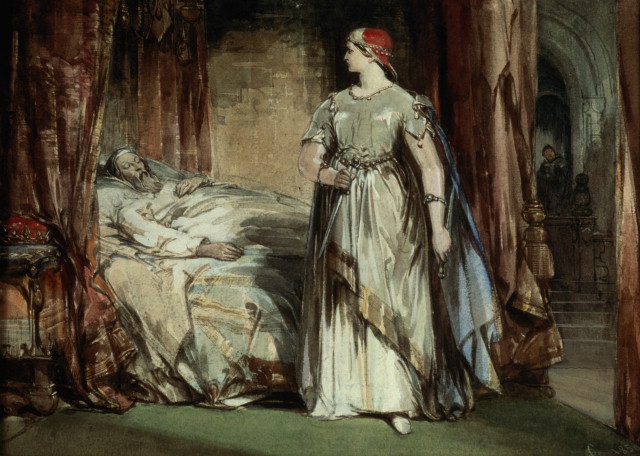 It is well known that William Shakespeare often twisted the facts in order to get a good story, so that what is presented as history on stage may well be far removed from what actually happened. This is a situation that must not be allowed to prevail any longer.

It is high time, for example, that the truth about Macbeth is told. Did Lady Macbeth really go mad and kill herself out of guilt for the murder of King Duncan? Of course not! Here is what really happened.

It is true that Macbeth killed Duncan at his wife’s prompting, and that he then became King. However, what is not generally appreciated is that Lady Macbeth paid a visit to Banquo’s DIY stall in Inverness market the following day.

“It is indeed, your ladyship”, said Banquo.

“Not so much of the ‘ladyship’”, she said. “It’s ‘Your Majesty’ now, you know, with Duncan being dead and Macbeth being offered the job. Now that he’s the King, that makes me Queen.”

“So what service can I offer Your Majesty?” Banquo asked.

“Well, the thing is that we’ll need to upgrade the castle a bit now that it’s home to royalty. For one thing, the dungeons will need a makeover because we’ll be torturing a completely new class of prisoner from now on. We’ll need a new set of thumbscrews and the rack we have at present is simply not up to the job. Can you help us with anything from your stock?”

“Thumbscrews I can do, but I don’t keep racks as standard”, said Banquo. “Mind you, I’ve just had a big thick catalogue from some guy in Sweden who can supply all sorts of torture kit in self-assembly form. I’ll see what he has in the way of racks and get him to send one over.”

“That’s right. He tells me that he has the answer to every castle equipment challenge you can throw at him. In fact his business slogan is ‘I Know Everything Already’, which strikes me as being a bit boastful, to be honest. I can’t see that sort of claim lasting long.”

“Well”, said Lady Macbeth, “that sounds like one problem solved, but I’ve also got a problem with the guest bedroom that you might be able to help me with.”

“It’s the bloodstains on the walls. When Macbeth stabbed Duncan there was blood everywhere. His late majesty was only a thin rake of a fellow, but who would have thought the old man to have had so much blood in him?”

“You know”, said Banquo, “that’s not a bad line. If anyone ever writes a play about all this he might like to use that.”

“That’s as maybe”, said the new Queen, “but it’s the way it’s ruined the décor that bothers me. There are damned spots of the stuff everywhere and I can’t get them out. Have you got any ideas?”

“It’s funny you should mention that”, said Banquo. “One of those weird sisters from Blasted Heath Cottage was down here last week and she offered to supply me with a new stain remover that they’ve just concocted – I don’t know what ingredients they used, and to be honest I don’t think I want to know. However, it looks to be very powerful against just about anything, blood included.

“The problem is that the price they’re asking is a bit steep and I don’t see myself being able to sell it with any kind of profit margin.”

“I might be able to help you there,” said the Queen. “If I can persuade my husband to murder a king I can surely get three old women to drop their price. Suppose I can arrange a decent discount that allows you to buy in bulk and bottle the stuff as a universal stain remover, do you think we might be able to come to some sort of long-term business deal?”

“What do you mean?” Banquo asked.

“We go into partnership. Your business would get the massive advantage of royal patronage, and I would get everything I needed to run the castle as a first-class centre for torture and murder, with maybe a little bed-and-breakfast concern on the side.”

“I like it”, said Banquo. “But what would we call our joint venture?”

“It’s your business, so your name would come first. How about Banquo and Queenie – unless you wanted to abbreviate it of course.”

And the rest, as they say, is history.