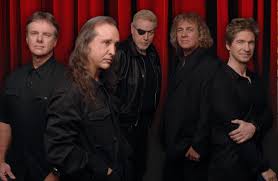 Kansas came together in Topeka, Kansas and began playing in bars in the Midwest. This legendary band has been making great music for four decades and has become one of America’s iconic classic rock bands. They were on their way to popularity after the release of their debut album in 1974.

To their credit they have 15 studio albums and five live albums. Kansas has also earned 8 gold albums, three sextuple-Platinum albums, one live Platinum and 2 one million-selling gold singles, among them “Carry On Wayward Son” and “Dust in the Wind”.

They have toured through North America, Europe and Japan. Kansas celebrated their 35th Anniversary with a symphonic concert in their hometown of Topeka, Kansas in 2009. It was all recorded on the DVD There’s No Place Like Home.

In 2015 they were inducted into both the Kansas Hall of Fame and the Georgia Music Hall of Fame. The following year they released their fifteenth studio album The Prelude Implicit. They remain popular by being on video games like Rock Band and Guitar Hero. Their songs have been included in TV shows like Supernatural and South Park and in movies like Old School and Anchorman.