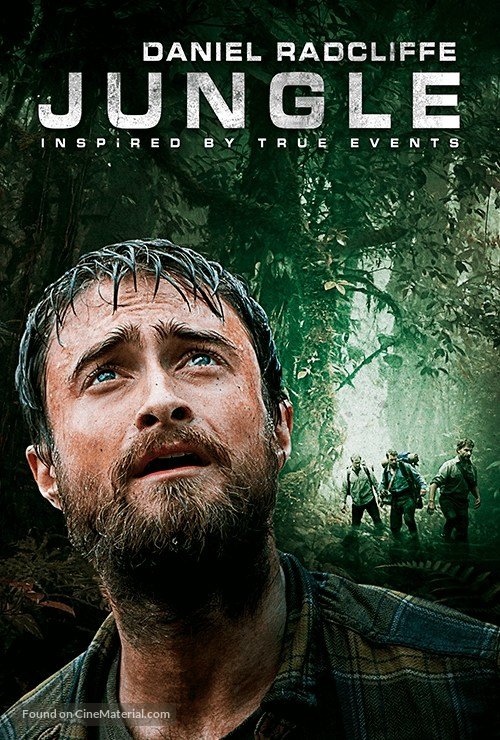 Jungle is a 2017 Australian biographical survival drama film inspired by true events that starred Daniel Radcliffe (Harry Potter of Harry Potter film series/ Nate Foster of Imperium/ Walter Mabry of Now You See Me 2/ Igor of Victor Frankenstein/ Ig Perrish of Horns/ Allen Ginsberg of Kill Your Darlings) as the lead actor. He played the role of Yossi Ghinsberg, an Israeli adventurer, author, entrepreneur, humanitarian, and motivational speaker based in Australia, who was stranded in an uncharted part of the Bolivian Amazon jungle for three weeks in 1981. This survival true-to-life film was directed by an Australian film director, producer, and writer Greg McLean, who came to world attention in 2005 with his debut feature film, Wolf Creek, that creates one of Australia’s most memorable and horrific characters. The movie is written by an Australian screenwriter, television producer and an actor Justin Monjo.

The movie is about the story of Yossi Ghinsberg, who traveled to Bolivia after 3 years as a soldier in the Israeli military. He went for a journey into the heart of the Amazon rainforest, where he met Marcus Stamm, a Swiss school teacher, played by an award-winning Australian actor Joel Jackson (Damien of Safe Harbour/ Peter Allen of Peter Allen: Not the Boy Next Door/ Charles Bean of Deadline Gallipoli/ Lachlan Ford of Hyde & Seek). Marcus Stamm is also the friend of Kevin Gale, an American hiker and avid travel photographer. Kevin Gale is played by an Australian actor Alex Russell (Matt Garetty of Chronicle/ Older Pete of Unbroken/ Billy Nolan of Carrie/ Seeker Burns of The Host/ Ryan of Bait).

When he arrived at La Paz, Bolivia, Yossi was spotted by an Austrian named Karl Ruchprecter, who claimed the existence of a lost Indian tribe and suggested that they can find them and search inside the jungle.  Karl Ruchprecter is played by an award-winning German actor Thomas Kretschmann (Captain Englehorn of King Kong/ Cross of Wanted/ Hermann Fegelein of Downfall/ Strucker of Avengers: Age of Ultron/ Abraham Van Helsing of Dracula/ Professor Z of Cars 2/ Mr. Smith of Next/ Damaskinos of Blade II/ Captain Wilm Hosenfeld of The Pianist). Yossi believed in him, and convinced Marcus and Kevin to join him hiking to the said jungle.

Yossi, Marcus, Kevin and Karl hiked through the jungle for several days, but when Marcus’ feet got injured, Yossi wanted him to leave the quest. Then, Karl and Marcus decided to leave the journey and go back to La Paz, which took three days. Kevin and Yossi continued their journey until their makeshift raft was destroyed by a very strong current that made Yossi washed away by the river, leaving Kevin behind. Yossi struggled to improvise shelter and forage to survive without a knife or any kind of survival training. He then almost give up hope after losing all sense of direction whilst wondering if he will ever survive the jungle. Meanwhile, Kevin is discovered by people from the local town who took him to Rurrenabaque, which is 120 miles from Yossi’s location which is at Curiplaya.

Arriving there, Kevin called for the help of the local authorities to search Yossi hoping that he is still alive. Through a plane flyover, they failed to find Yossi, yet Kevin believed that he is still alive. Kevin ropes in the help of the local boat driver to search Yossi, until he find him very weak, then took him to Rurrenabaque. The epilogue says that Marcus and Karl were never seen again, yet Karl was seen and was captured by the authorities, for he had sent hikers before them with vile intentions.

The film was premiered on August 3, 2017 at Melbourne International Film Festival. According to a review aggregating site called Rotten Tomatoes, this film has an approval rating of 50%, based on 40 reviews, with an average rating of 5.5/10. Yet a writer named Alex McLevy, praised Daniel’s acting commitment and the shock of some of the scenes. Another reviewer named Jonathan Barkan gave the film 4.5/5 saying that it was without a doubt the most thrilling, exhilarating, and inspiring film that he had seen this year.

As for me, this movie is really inspiring and it emphasizes hope and faith. It’s a must to watch since this movie is really enlightening. It inspires everyone for survival in case in a happenstance we lost in the woods. Though Yossi struggled hunger for almost 3 weeks in a very remote jungle, yet he just believe in God’s will and put his faith to Him that he could make it out from the jungle. This movie is not just a movie, it’s a revealing testimony from a true-to-life survivor that no matter what happens, always never give up. There’s really a way, and there’s a reason why we stuck at those struggling times. Maybe it’s just a test for a calling, a challenge for spirituality, or a reborn for our much stronger personality. No matter what it is, never give up hope. It’s the key for salvation. Yossi is very lucky that his story of survival has been filmed and played by one of the most famous actors nowadays. Remarkably as it is done. This movie deserves applause! This is more like Tom Hanks’ movie Castaway, only that it’s not from the drifted island, it’s from the remote woods that is a home to a myriad of biodiversity where there are some hunters hunting their preys to survive.

You gotta watch this movie guys, it’s really inspiring, and it’s worth to watch! I strongly recommend.

If you haven’t watched this movie yet, here’s the official trailer: