Salvatore is just a small Italian town who believes in tranquility, at any cost, if you see something you aren’t supposed to see, you just look the other way, until this particular day when a sly wind suddenly starts blowing in from nowhere and with it, 2 strangers arrive and open up a decadent Chocolate shop. Through papered windows, the town’s folk, led by their noses sneak closer for a peek inside. It is the morning of the big opening of Juliette’s Chocolaterie. 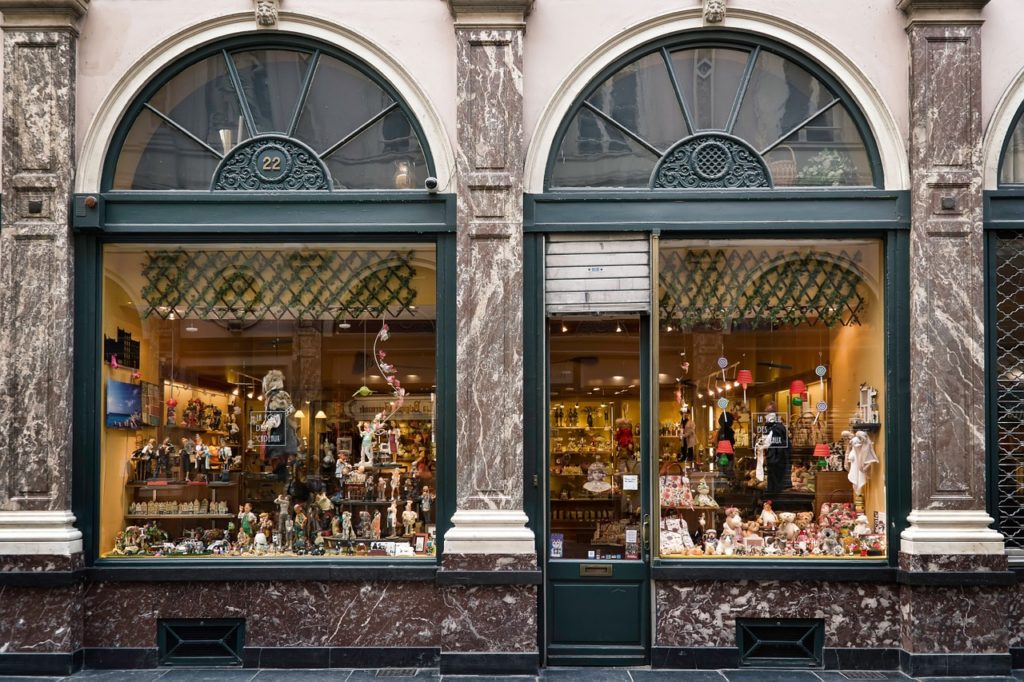 As the door swings open, her tiny shop is almost instantly filled with samplers of these mysterious and diverse, decadent delights, soon a few pence are spent on this and some on that. At the toll of the noon chime, the revelers go home for a well-earned rest.

The winter breeze caresses Jean Paul’s face as he stands near the shop’s closed door, peering almost passively at the freshly painted sign above the door, Juliette’s Chocolaterie, reads the sign, it’s gold-leaf letters formatted in loopy cursive against a burgundy background.Timidly he enters the dimly lit, chocolate-riddled enclave positioned between Rico’s bakery and Bonaparte shoe store.This is his painfully obvious, first time buying chocolate for someone. Like most dealings around the noon respite from business, in this town, he expects a quick, almost abrupt transaction as shop owners hastily wind-up transactions to get home for a snooze. He will grab a pre-made box of chocolates, slap it on the counter, pay for it, and be on his way.Except, as he scans the room, he sees no chocolate assortments awaiting his purchase. Instead, there are, dozens of glass stemmed, perching plates, containing several glistening chocolates of every shape and size. Jean Paul’s fatigue escalates just by the immense variety of them. 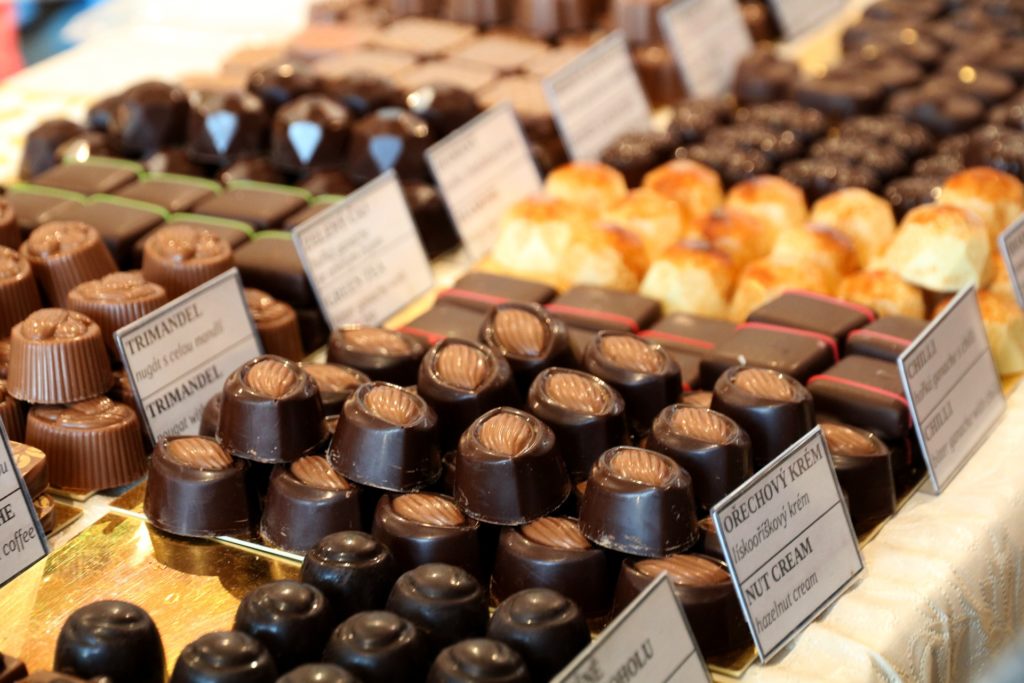 “I’ll be right with you,” a voice chirps before he sees any figure that can be attached to it. He glances at his watch. An attractive young woman with blue eyes, rosy cheeks, and bronze tresses finally step into his sight. “I’m Juliette,” she says.“Hello, I was hoping to grab a ready- assorted box of your chocolates. I’m a little short on time,” Jean replies.

“I’m sorry, I don’t have those. I create boxes individually for every occasion,” Juliette sings. “the chocolatiers selection is a fine art, you know.”Her inquisitive blue eyes peer intently at him. Momentarily, they linger on his collared white-starched shirt, then his expensive gold Patek Philippe wristwatch, and finally on his calf-skin ‘Antonio Meccariello shoes.“You’re an accountant…”It was a statement.“Yes, but, how?” he answers, puzzled.“So you can afford a nice selection of chocolates.” Another non-question.“I-I suppose.” Jean has no idea how a conversation with a chocolatier should go. This is his first time having one.“Girlfriend?”This is the one thing she chooses to pose as a question? he thinks. His cheeks are burning. “No,” he answers quickly.Too quickly.“Hmm. Okay then, let’s try this question. What are you trying to say with the chocolates?” Juliette asks.Jean begins to regret entering this chocolate shop. What choice does he have? He should have had more time but has been too busy to make it out of the office. This chocolate shop is the only one in town.The best way out of this is through. He contemplates the chocolatier’s question.Rebecca has been his best friend for the past ten years. This year, for her twentieth birthday, her parents have decided to stop speaking to her as punishment for her refusal to get married to her stinking rich second cousin Claude La Mar.They want to guilt-trip her into making “the right decision,” she explained to Jean this morning. Despite her rebelliousness, she spent the whole day waiting for them to send her a simple celebratory message.“At least they can do that much, right? But I’ve gotten nothing,” she told him this afternoon.“Seriously?” he responded.“I’m not a boy, Jean. I’m disposable, Italian collateral.”Rage boiled in Jean’s chest. He hated her parents at that moment, but he kept that bit of emotion to himself.“You and I are “pitching up” tonight, as the smart kids say,” he answered.“And by the way. You’re the opposite of disposable. But you are recyclable. Get it? Because you believe in reincarnation.”“It’s too soon for jokes, especially your awful ones,” she replied sullenly.Jean snaps back into the moment. Juliette gazes intently at him.“The chocolates are for my friend. It’s her birthday, and she’s going through a tough time,” he says.“Oh. I’m so sorry to hear that.” Juliette’s voice is gentle.“And she shouldn’t be going through it. Because she’s an amazing woman She deserves better.”Juliette notices that Jean is no longer talking to her. He is externally processing. She quietly watches him. Cracking people open is her forte. She finds it interesting that, often, all it takes is the right question.Could’ve been a detective, she silently giggles.Jean’s furrowed eyebrows continue to work out the answer to Juliette’s question.“I want her to know that she has me.” He looks up with a glint of certain determination in his eyes. “That she can count on me no matter what.”Juliette gasps. “I can do that! I can make up a box of No Matter What chocolates.”“Okay,” Jean says. Then, “Great!” he follows up with more enthusiasm.Juliette dances through her shop, selecting one dark truffle here, a rose-scented Turkish delight there, all are different, until she has created an assortment that looks handpicked, and fit for a queen.She beams at her lone customer. “This assortment says I’ll be there with you through any moment life throws your way.”“Isn’t the selection a little over the top?” Jean asks.“Isn’t life?” Juliette responds.Jean chuckles. “Fair enough.”“And if your friend doesn’t get the symbolic message behind the chocolate selection, You can always try letting her know with your words when you give it to her.”Jean pauses, then blinks, wondering if he has the spine to do such a thing. His forte is usually just some stale bad jokes.“Yes,” he says. “I think I will.”After he pays for the chocolates and thanking her,  he heads out, Juliette yells after him, “The ribbon, you forgot the ribbon!” 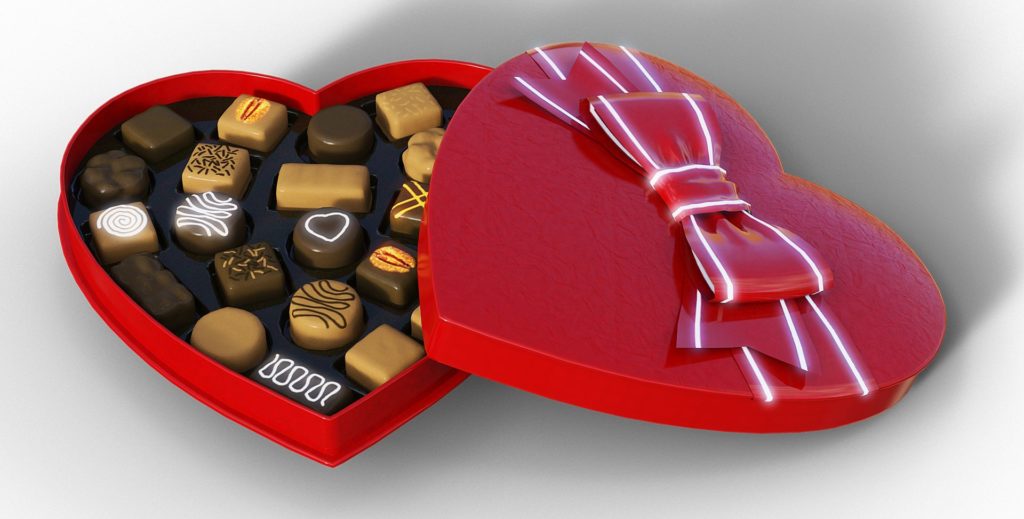 Jean turns around and heads back.”Clutching the red-ribboned delectably, sweet-smelling assortment close to his chest he walks briskly to Rebecca’s apartment building.“Tonight the sparks will fly at Becca’s parent’s home, yes, they  sure are gonna fly.”