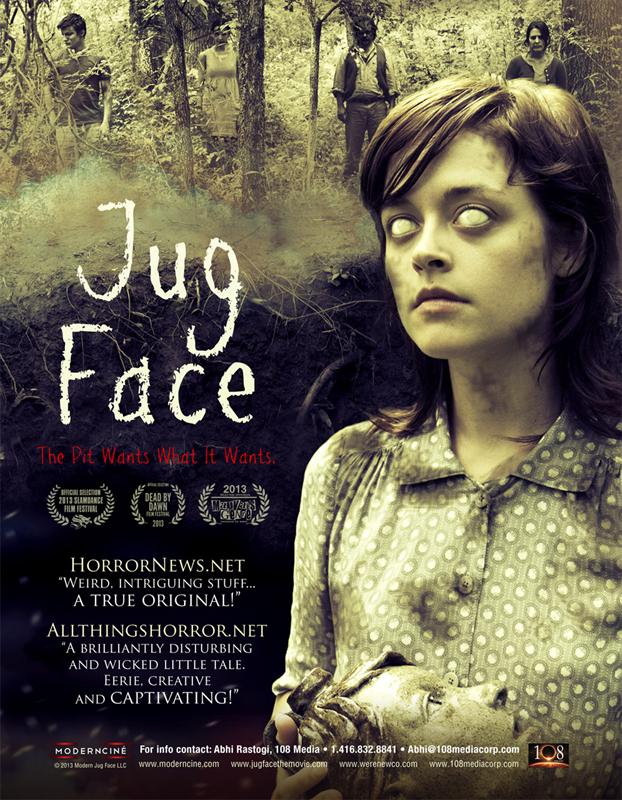 As it was Halloween recently we had some horror films on DVD for our little niece and nephew to enjoy and ‘Jugface’ was one of them. Its low budget but well crafted minimalist affair in that it exploits suggested horror early on and then the supernatural arrives to ramp it up a gear.  It’s from 2013 but not been on terrestrial or cable TV in the United Kingdom so worthy of a review. All my film reviews will be DVDs that have not been on normal TV in England.

In the backwoods of Georgia a reclusive community lives their lives by superstition and suspicion, in fear of a strange pit they make sacrifice to in return for good health, to keep the status quo between them and evil.  But one of them, 18-year-old Ada (Lauren Ashley Carter), has done the taboo some isolated people do and had sex with her brother, upsetting the pit.

In the community village a man called Dawai (Sean Bridgers) ritually produces clay pots and jugs and whoever’s face appear on the jug when he occasionally falls into a state of deep trance and his eyes roll back to the whites, the person of the face sculpted is to taken to the pit as sacrifice the next day. Ada knows it’s her for her sins and goes to the shed at night and steals the pot, as expected freshly kilmed with her likeness on it.  Not wanting to have her throat cut over the pit, the way it’s done, she steals it and hides it in the woods.

Ada has been arranged to a marriage to another in the hope of calming the evil spirit. When Dawai discovers the jug has gone he decides to make another one as he fears retribution from all sorts if he tells them he has lost the jug and the consequences of that.

Ada is unaware another jug has been made and that person, Bodey Jenkin (Mathieu Whitman), is taken to the pit and sacrificed, blood gushing into the pit from his throat.

It appears Ada is now pregnant by her brother and the longer she is not claimed by the pit the more a supernatural entity visits the community and takes the villagers one-by-one. When her mother finds out her sins she, too, turns on her own, as does everyone but Dawai and the body count continues to rise, no help coming from the outside world any day soon…

The craft of the filmmaking from a first time feature film director makes this a worthwhile watch. Chad Crawford Kinkle makes the most of his meager budget and squeezes the most out of that nickel. It looks moody and feels atmospheric as we unpick the mystery and menace of the pit although not particularly scary to anyone over 12. Our little niece asked what the muddy hole full of water was for.

Good acting and a little known cast take every opportunity to impress and Lauren Ashley Carter as Ada particularly good as the innocent but terrified kid. Themes of teen menstruation provide most of the blood and some incest and woman beating thrown in. It’s basically an all men are horrible movie.

The twists are OK and some surprising plotlines that you don’t expect. It’s certainly not conventional horror where sexy teens run around in skimp shorts screaming being chased by rednecks with chainsaws. I’m not a huge horror film fan because of that cliché but liked this because it was different. If you are a film fan you will appreciate the nuance and talent on show here. It’s not likely to be neon lit when it does come on telly by the critics but one to watch if you have seen all the other stuff before that’s repeated to death.