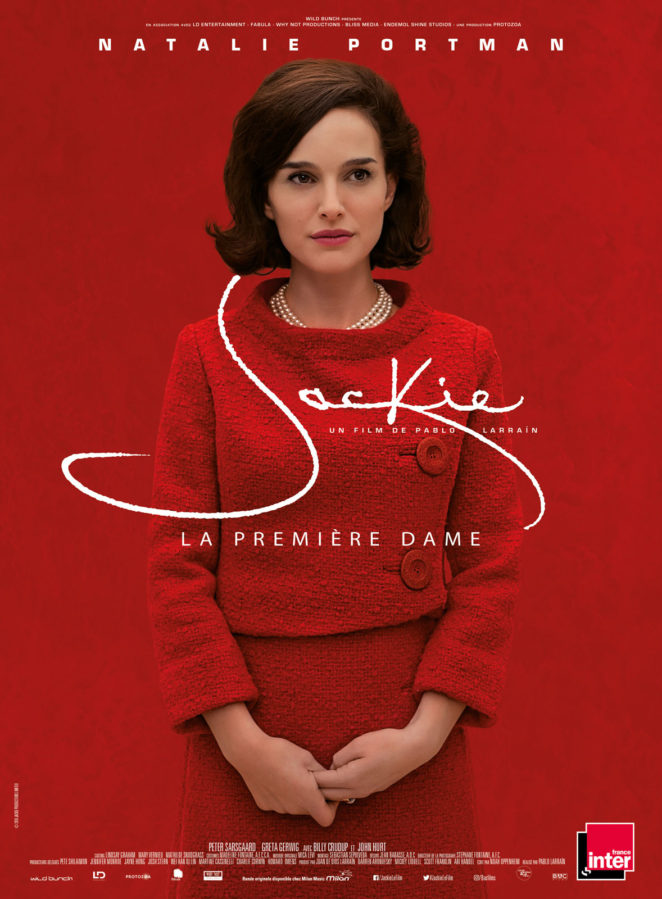 I, like many curious travelers, have been to Dallas to check out the Kennedy assignation experience. I, like many, cannot see what all the fuss was about as far as the difficulty to do it and the bloke who did it. The shot is barely 60 yards and plenty of opportunity to take it, hence why Oswald chose that spot in Dallas. He was an army sniper after all. But Americans find it hard to deal with things like JFK and 911 and so conspiracy theories are abundant as, indeed, there are movies about November 22nd, 1963.

Now, ‘Jackie’ is not about who did what and who may not have done that but a drama crafted around the First Lady Jackie Kennedy and how she dealt with her husband’s death straight after his assignation. Natalie Portman took on the role and has become the Oscar chasing actress of the new Millennium, the way Nicole Kidman did for a while, and the way Meryl Streep has been for 50-years.

It was a risk for Portman as the film was appointed little known director Pablo Larrain. He wanted Portman and she obliged his wishes, especially when he asked screenwriter Noah Oppenheim to tear out any pages of the script that didn’t contain scenes with Jackie Kennedy in them, as he wanted his movie to be entirely about Jackie, the clincher for Portman but trimmed to the perfunctory 100 page screenplay. Portman would get her Oscar nomination.

So a week after the assignation, a journalist (Billy Crudup), visits Jacqueline Kennedy for an interview at her palatial home in Hyannis Port, Massachusetts regarding her husband’s legacy. She is still grief stricken, of course, but welcomes the distraction. We start off light as she reflects upon her 1961 televised tour of The White House, back then the First ladies job to simply look glam and don’t get involved in the politics, and then the journalist then turns to her scooping up her husband’s brains from the hood of the motorcade car.

Robert Kennedy (Peter Sarsguard) soon appears in the story and shares her grief, exploring her deep anxiety for the well-being of her children in adjusting to the loss of dad. He continues to support her and helps her in the planning of the funeral, which she wants to be low key and personal. But the Kennedy’s and the state are not having that and lean on her to have the full works, using the funeral to boost the Kennedy clan and the Democratic Party after his terrible event. She comes around in the end and sees the bigger picture, this about her legacy as much as a US president passing.

Jackie struggles with sleep and becoming hooked on booze and medications, regularly seeking spiritual counsel from a priest (John Hurt), who she confesses that she contemplated suicide, amongst other things, driven by an irrational fear that she could have somehow stopped her husband dying. The pain is cranked up some more when the assembled White House grandees witness Lee Harvey Oswald’s murder on live television, Robert insisting that Jackie not be informed.

As the interview ends, Jackie makes it clear she maintains control of the interview and what may come to press and which parts are to be redacted. She wants to be remembered in words as more than JFKs arm candy.

As I say this is a classic Oscar chasing effort although its one saving grace is it’s not very long. Oscar nominated films tend to be well over two hours. It’s pretty dull stuff and although a nice gentle and moody soundtrack and a solid lugubrious turn by Portman – who looks a little like Jackie – it’s a meandering idea for a movie with not a lot of substance. It’s a script that’s been on the shelf for a while for a reason. It’s the final Kennedy story that was the least popular. It’s the First Lady; it’s a vacuous affair and the whole point of her.

It needed some sort or driver to it other than the First Lady moping around her wealth. JFK was a known philanderer whilst they were married and the romance gone by this point. If you can sleep with Marilyn Monroe in the presidential bed of your choice then why wouldn’t you? A lot of their marriage was an illusion. Still she was cute and good for TV and why she got the job.

For JFK fans and that whole story then they will get something from this but for everyone else they will bemoan renting this tedium. I think the main problem is if we are not American we simply don’t care about Jackie O. I would just watch the brilliant JFK again and scratch your head why he didn’t win an Oscar for it.