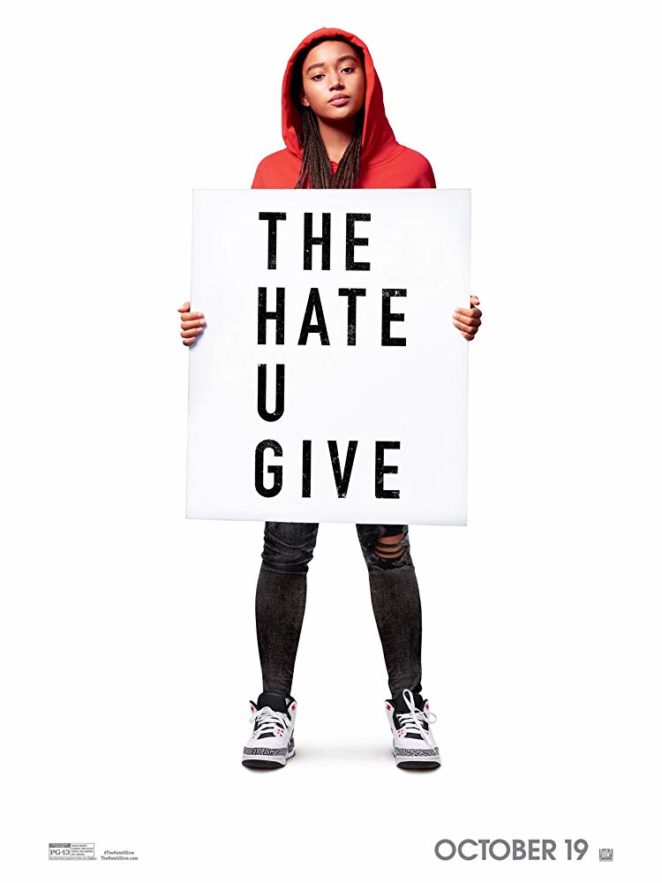 SO, another film drama on race tensions in America between poor black communities and the cops. This time it’s not based on true events but a book of the same name as the film. It’s a big thing when black Americans are shot by the police there but the noise and selective angry statistics quoted soon after often buries the truth that black Americans may not actually targeted by the police when you actually break down those statistics. I’m sure they were in the 1960s but not so much today.

Of the 1,100 American victims of police shooting back in 2017, half were white, 26 percent were black, and 17 percent were Hispanic. The FBI counted 464 justifiable homicides of black people by police officers in 2017, and 444 of those cases the person had a gun or knife when killed. Problem is young black men aged 15–34 are 10 times more likely to be killed by police than other people. 20 unarmed black people were shot and killed by police in 2017.

The argument from activist is that these statistics are evidence of racism toward blacks, since whites consist of 62 percent of the population and blacks around 13 percent of the population. There are 46 million black people in America. On the other side of the debate we know that in that year of 2017, blacks were charged with 62 percent of robberies, 57 percent of murders and 45 percent of assaults in the 75 biggest urban counties in America in 2017, despite only comprising 15% of the population in these counties. The point is that such a concentration of violence in minority communities means police officers will be disproportionately confronting armed, aggressive and obdurate suspects, raising the risk of using lethal force. The statistic that we can’t find is of the 20 – on average – unarmed innocent black Americans killed every year how many are shot by black cops? That black cop stat would destroy the perceived bias. The only stat there is, is that black officers are slightly more likely to use lethal force in black communities. Meanwhile, in the same year of 2017, 46 American police officers were killed in the line of duty by aggressive assailants.

Pretty Starr Carter (Amandla Stenberg) is a 16-year-old American high school student who lives in the black neighborhood of Garden Heights (fictional for the films purposes) but goes to the mostly white private school of Williamson Prep 5 miles away, where she is trying to fit in by acting white, and her privileged white friends tend to ‘act black’.

At a house party with kids from her neighborhood a gun goes off and Starr is driven home in a panic by her childhood best friend Khalil (Algee Smith), who carries a torch for her. Now they are all grown up, even though she is dating a white boy, he is her soul mate.

Whilst driving home, they are stopped by a cop for failing to signal a lane change. Starr has been well drilled by her father (Russell Hornsby) on what to do if pulled over by the cops. Its hands on the dash, no sudden moves and respect the cops with no backchat. While she stays in the car, Khalil is somewhat less compliant and gunned down by a nervous young cop, mistaking a hairbrush for a gun.

Khalil’s killing becomes a national news story, Starr’s identity as the witness kept secret from everyone but her family, her white school friends, and Starr’s boyfriend, Chris (K.J Apa), unaware of Starr’s connection to the killing. Keeping this secret weighs on Starr as she balances her two personas to keep it real. Threats from the local drug lord ‘King’ (Anthony Mackie) on Starr and her family not to testify, as King maybe named as a drug dealer, who Khalil was running dugs for, increases the stress for the young and intelligent kid from the streets.

Armed Americans and guns are the problem, not so much racism, something this film doesn’t want to explore. If the black community had to recognize the above statistics that gun homicides tend to be in certain places they would have to accept they have a problem. 95% of black people, who are shot, are shot by black people. In contrast cops kill about 65 people a year in total in Canada. There are 300,000 black people in Canada from a population of 36 million people. This drama doesn’t want to go there and all the white people two dimensional racist and the black people oppressed and not at fault, even though the film is pressing to be about ‘the hate you give’, a line from a Tupac song that talks about young black children being taught hate from their parents, maybe why so much crime in that community.

It cost £23 million to make and did $34 million back so the cinemas not exactly packed out by the community it’s defending, no doubt mostly white liberals pitching up who feel guilty about their gun happy cops. A film about the real truth on this stuff would probably draw a better crowd in the way ‘Crash’ did 15 or so years ago. I’m sure there are racist cops out there but if everyone is armed then very occasionally innocent people will get killed.

Amandla Stenberg, privileged middle-class black girl with a Jewish name, is excellent in the lead although you never really quite sure why she comes to the conclusion that all white cops are racist in the films end scenes. In the shooting scene you can see the cop is nervous and the black kid is aggressive for no real reason other than misplaced bravado yet that side of things never looked at in the film. Black director George Tillman Jr., is just not giving a balanced argument here.

That aside it’s worth a watch and one of the rated films of 2018 by critics.