I like a good western. Who doesn’t? They are easy to make and the rules are straight forward of cowboys versus Indians or ‘stubbled’ bad guy dressed in black versus seething deputy who has vengeance in his heart, Hostiles the former. With basic subtitles a field for of Indian school kids can follow and enjoy it although this one rather brutal so not for the little ones. Brooding Christian Bale is the hero and beautiful Rosamund Pike our damsel in distress.

The director of this enjoyable macho romp is Scott Cooper, who has done just four films in eight years and some notable ones, Oscar winning with Crazy Heart, Out of the Furnace with Mr. Bale and Black Mass with Johnny Depp. This guy only gets out of bed when it suites him.

It’s 1892, and after twenty grueling years of fighting the native Indians on the American plains, war weary Capt. Joseph J. Blocker (Christian Bale) of the Union Army is ready to hang up his spurs and Winchester Rifle and settle down somewhere. But Col. Abraham Biggs (Stephen Lang), his superior officer at the fort, has one more mission for the war hero and its going to be tough. Blocker has no choice this time and it’s an order, escorting Cheyenne chief Yellow Hawk (Wes Studi) and hs young family to their ancestral home in Montana’s Valley of the Bears to encourage a peace treaty. Begrudgingly Blocker handpicks his men and horses and off they go. They know they will be attacked at some point by the local brutal tribes in the feral landscapes and Yellow Hawk also at risk. 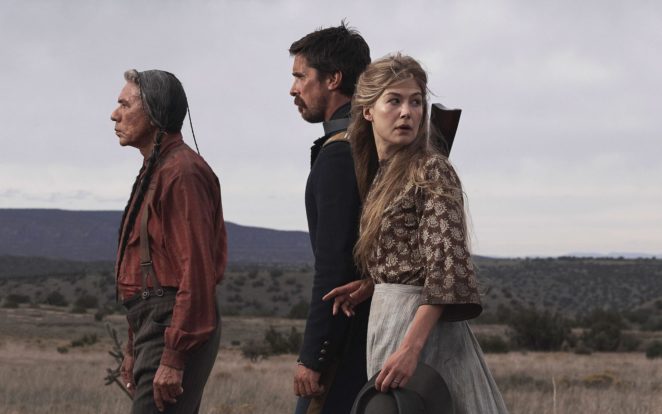 A day in and they come across a fire-gutted farmstead. Very recently widowed and traumatized settler Rosalie Quaid (Rosamund Pike) sits in the charred rubble, holding her dead baby. Blocker has no choice but to take her with them, her other kids and husband murdered by the local Comanche’s and laid to rest.

As they set off the next day they are being stalked by those Comanche’s and Bales unit of 15 or so hit the next day, taking causalities but killing enough of the Comanche’s in the hope they won’t return. Pressing on and further traumatized the units senior men are also losing it, one running off into the wilds, another shooting himself. But at the halfway point they get welcome rest in another Union outpost. A settlement safe from attack and hopefully somewhere for Mrs Quaid to stay until the next train arrives. But she only feels safe around. Blocker has earned her trust, and she, his, departing the next day with them to deliver Yellow Hawk to his people as more peril lays in wait.

Pretty good stuff and if you want a gritty Western and realism then this is for you. It’s not as realistic as Open Range or as gruesome as Bone Tomahawk but there is some scalping and kids being shot. I would say it’s more Coen Brothers True Grit than the 3:10 to Yuma, Christian Bales other Western. If ever an actor was made for the genre it’s him. He does mumble his way through this though and that’s annoying. I just gave up rewinding and turning up the volume after a while. Not that there is any plot to be confused by if you miss any dialogue.

It’s pretty violent but not too much looking away from the screen stuff. Don’t watch Bone Tomahawk if you are squeamish. The cowboy cliché is there but authentic as can be for a cinema going audience. ‘Hostiles’ is very much a grown-ups movie. It’s really just a rehash of old Westerns but with a strong cast, charismatic lead and beautiful big sky panoramas