Fantastic Beasts and Where to Find Them is a spin-off prequel of the Harry Potter film series that was written and produced by J. K. Rowling, who became the world’s first person to become a billionaire by way of her fiction writing career. This movie was released on year 2016 and was directed by David Yates and distributed by Warner Bros. Pictures.  From a production budget of just $180 million to a whooping grossing income of $814 million, surely Harry Potter movie fanatics won’t miss watching this British American fantasy film.

The film stars Eddie Redmayne (Balem Abrasax of Jupiter Ascending) as Newt Scamander, with Katherine Waterston, Dan Fogler, Alison Sudol, Ezra Miller, Samantha Morton, Jon Voight, Carmen Ejogo, Ron Perlman and Colin Farrell in supporting roles. It is the first installment in the Fantastic Beasts series, and the ninth overall in J. K. Rowling’s Wizarding World, the franchise that began with the Harry Potter films. So I have here these 19 magical creatures that I’m gonna feature, get to know them and don’t forget to share and cast your up-vote. Enjoy!

All pictures were cropped from Paint and collaged at Pixlr app. 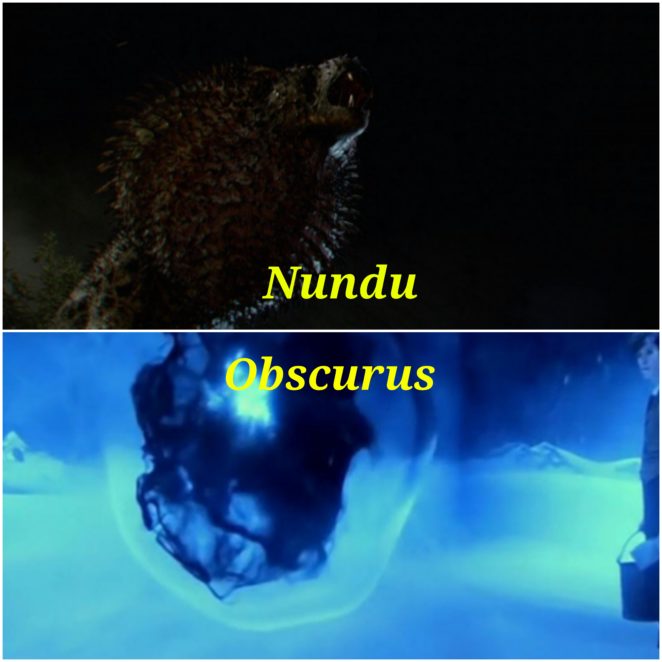 The nundu is a large beast that closely related to leopard. It is found mostly in east Africa and can move silently despite its huge size. It has a very toxic breath and can fill the entire village with poison that can annihilate in an instant. Considered by some to be the most dangerous living magical creature, it is also hard to be subdued. It has never been defeated by less than around 100 wizards working hand in hand together. This one's really a monstrous lethal magical living thing!

An obscurus evolves from the repressed energy of a magical child, known as an obscurial. It is being described as a parasitic dark force created when the child in question was forced to repress their talent through any abuse (physical or psychological). This energy could manifest itself as a separate entity that can outrage in a violent fury that could cause large havocs. 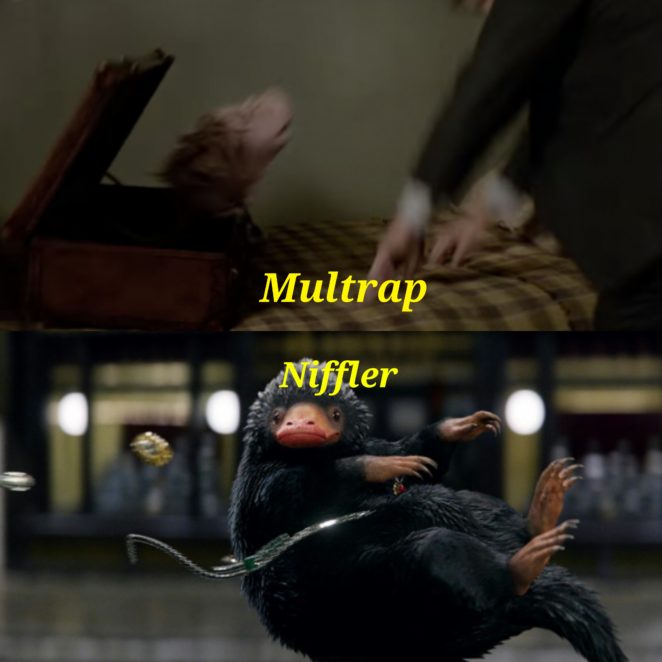 A murtlap is a marine beast that resembles a rat with spikes on the back that looks like sea anemone. It eats crustaceans and may also bite for feet of any human who steps on it. It is found mostly on Britain's coastal areas. The growth on its back is also edible, it can be pickled and eaten to improve one's resistance to jinxes. However, eating it excessively could cause an unsightly purple ear hair to grow.

A niffler is a magical creature with a coat of black and fluffy fur with a long snout. It is very much attracted to shiny objects, that makes it very easy to locate treasures. Yet, this could also mean that it could wreak havoc if kept or set loose indoors, however it's harmless generally. 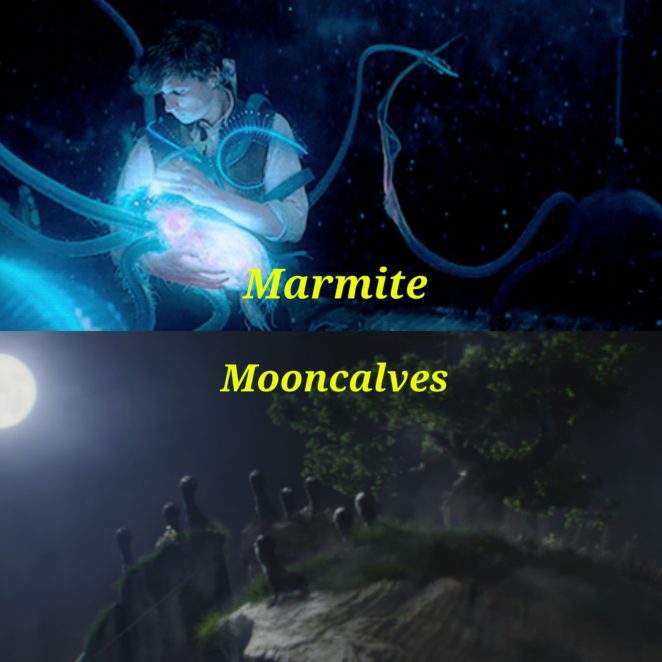 The marmite is a squid-like magical creature that is also moderate-sized. It looks like a cross between a dust mite and a squid. It has a transparent bio-luminescent body and long trailing tentacles that reaches up to 10 feet in youngsters, and longer for adults. Young marmites had to be bottlefed when kept in captivity, for they were unable to feed themselves.

The mooncalf is a shy creature that only comes out during a full moon from its burrow. It has pale, smooth grey skin and has a very long neck and protruding eyes that are seen on top of its head. It has also legs that are spindly that ends in large webbed feet. 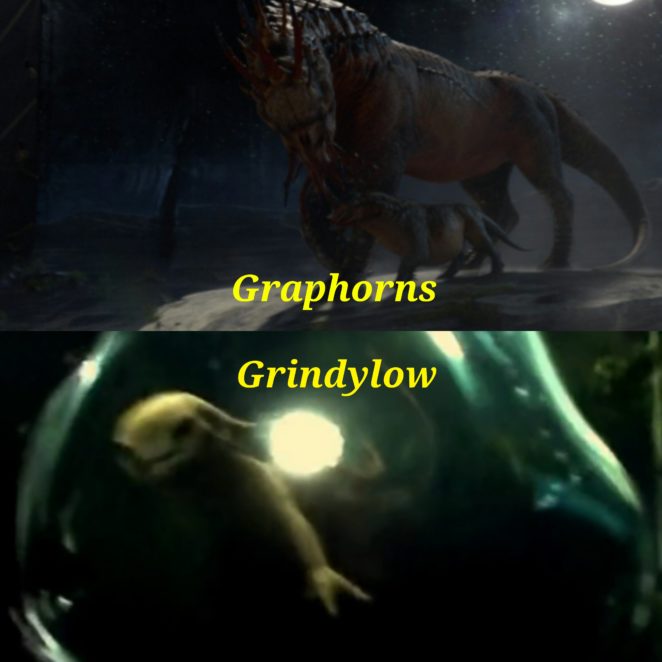 The graphorn is an aggressive and dangerous magical creature that is native to the mountains of Europe. It is large and humped-back, with grayish skin that is said to be tougher than those of the dragons. It can also repel most spells and has two golden horns. It walks on large four-thumbed feet. Its mouth is made of tentacle-like appendages that is used to grab food and also for showing its affection.

A grindylow is a small, horned, pale-green water demon and a dark creature with grasping fingers. The films give them octopus tentacles for legs, though they are not described as such in the novels. 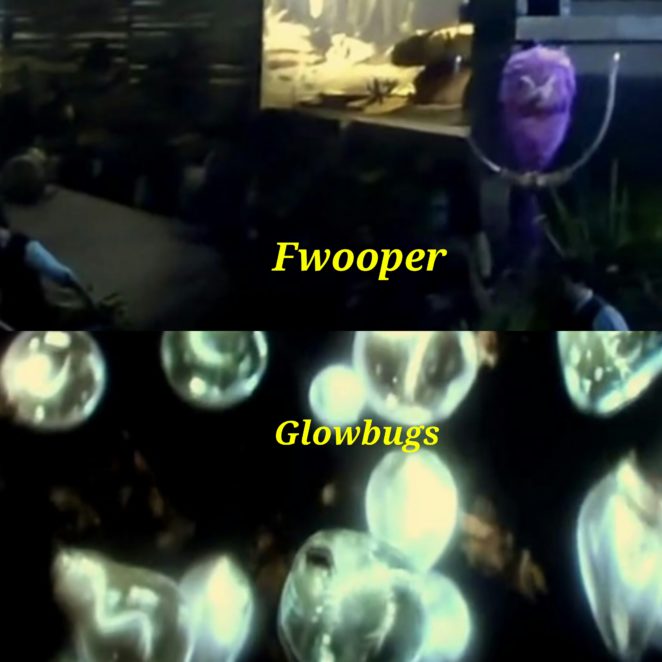 The fwooper is a magical African bird with motley feathers. When listening to its high-pitched song, it will drive the listener insane, so each bird must be sold with a silencing charm placed on it, wherein the charm has to be reinforced monthly and a license is required to own of these birds.

Glow bugs are insects with the ability to create their own light. They were seen mingling with Doxys and Grindylows inside Newt Scamander's suitcase in 1926. 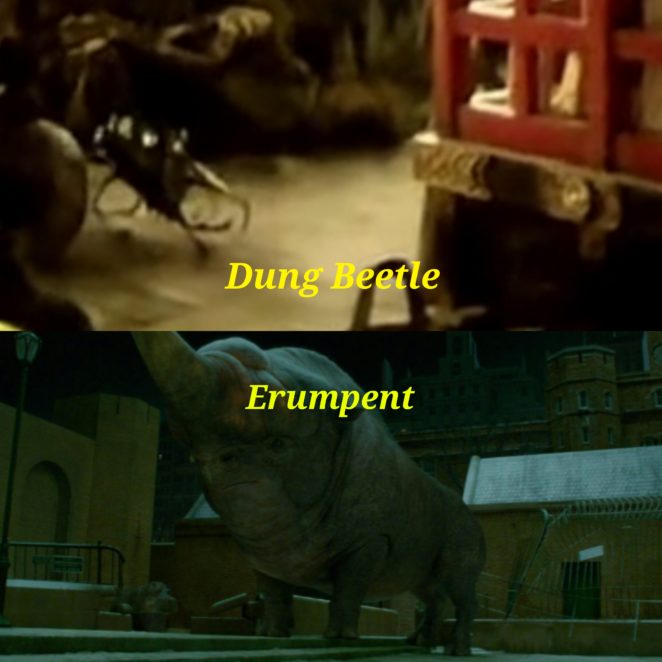 The dung beetle is a specific variety of scarab beetle, known for subsisting at least partially on faecal matter.

The erumpent is a huge African magical beast resembling a rhinoceros. It is a powerful creature with a thick hide capable of repelling most curses and charms. It has single long horn and thick tail. It is treated with great caution and respect by African wizards and witches. 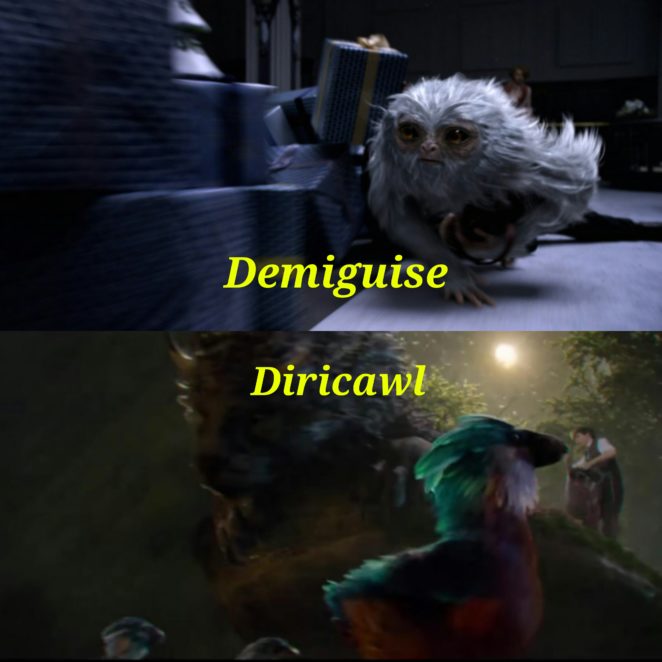 The demiguise is a peacuful, herbivorous creature that can make itself invisible and can tell the future, that makes very hard to catch. Mostly found in the Far East. Only wizards and witches trained in their capture can even see them. It looks like an ape with a large, black eyes and long silky hair.

The diricawl is a plump, fluffy-feathered and flightless bird. It can disappear and reappear elsewhere as means of escaping danger. Muggles believe that diricawls were the extinct dodos. 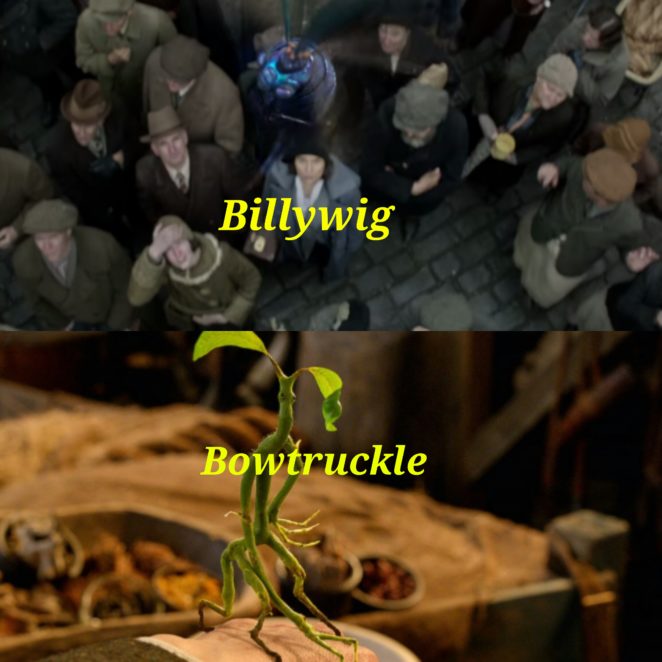 The billywig is an insect native to Australia. It is around half an inch long with vivid sapphire color. Its speed means that it is rarely noticed by Muggles, and wizards and witches can only spot it once they have been stung.

The bowtruckle is immensely difficult to spot, being a hand-sized, insect eating, tree dweller with long sharp fingers (two on each hand), and has brown eyes. It looks like a stickman made of bark and twigs, that serves as its camouflage in its natural habitat. 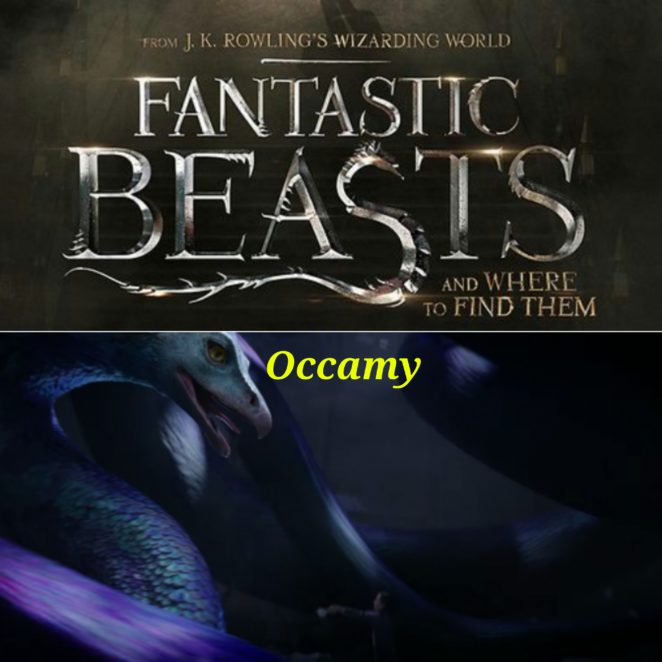 An occamy is a winged creature with a serpentine body that has two legs. It resembles a cross between a bird and a dragon. It is known to be choranaptyxic, meaning it can grow or shrink to fit any space available. Its shells are purely made of silver and worth a fortune. It is plumed and hatched from eggs, and mostly found in the Far East and India. 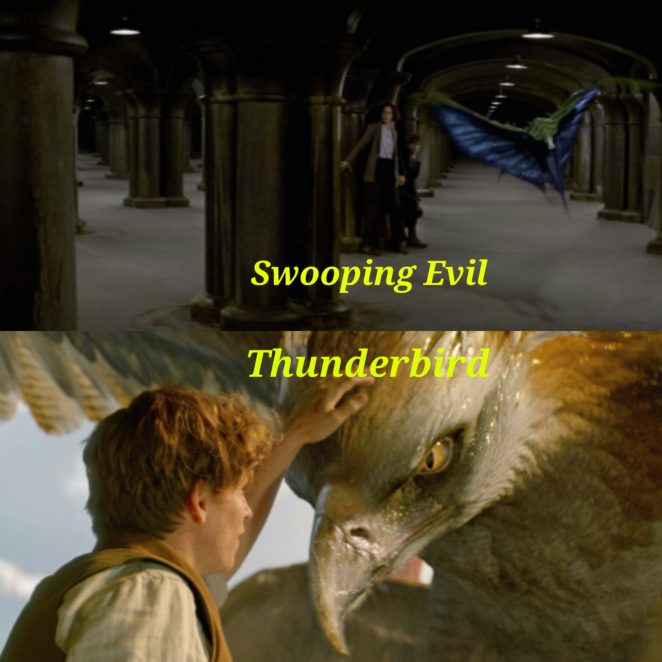 The swooping evil is a winged magical creature that looks like a breed of a reptile and a very hugr butterfly. It's a blue-and-green flying creature that shrinks into green spiny cocoon when it's idle of flying. It feeds on the brains of the people on which it is regarded as quite perilous. When it flies into someone who cast some spells, it will deflect those spells. Its prooerly diluted venom secreted by this creature is said to erase bad memories.

The thunderbird is closely related to a phoenix. It is found commonly in Arizona and in southwestern United States. It is native to North America and can create storms when it flies and is highly sensitive to upcoming danger.