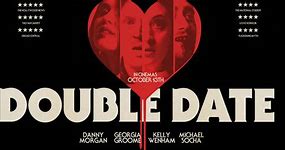 So Double Date, the debut feature of English director Benjamin Barfoot, a British comedy horror that went fairly unnoticed but above average and worth seeking out if you are a horror film fan, or not. It got a solitary nomination on the festival circuit at the British Independent Film Awards but it’s better than many that got loads of nominations.

It’s one of those films with a relatively unknown cast and some very attractive leading ladies, the ones that do the slicing and dicing. I wouldn’t say it’s a feminist film but the buxom girls are on top in every way throughput this film.

We meet 20 something vamps Lulu (Georgia Groome) and Kitty (Kelly Wenham), pretty sisters who live all alone in a big old drafty mansion in the sticks. By night they prowl the bars and clubs of London looking for men. Not just any men but virgins, seducing them, taking them home and then, well, if they are not virgins they got a dagger to the heart, and the spleen, and the stomach and the lungs…

Tonight they will meet ladies man Alex (Michael Socha) and his ginger best buddy Jim (Danny Morgan), who works in I.T, and has just split up with his only relationship and hopeless with girls. The boys successfully pick up the girls up and hit the clubs, unaware of their intended fete. But Jim and Lulu get sidetracked at Jim’s parents and she begins to warm to him whilst Alex’s lads patter is tiring Kitty and she just wants to get them to the mansion to do the deed. 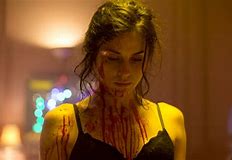 On the way they get side tracked again when the car breaks down as they head to Alex’s dad Frankie (Benny Bereal) in his caravan. Here he becomes aware what the girls really are after a news report and tries to warn his boy. He is too late and his last night on Earth as the girls head to the mansion as we find out exactly why they want a ginger virgin…

I enjoyed this because it’s that satisfaction you get from watching a film you did not expect much of.  Like when I watched Bio Dome in the early 1990s. Its mix of the bloody and violent with the funny and silly is surprisingly appealing. The opening scene really is quite vicious and then you jump to much sweeter scenes as that raging female, man hating vibe simmers briefly.   Make no mistake. This is a feminist film by a male director.

Another thing I like about this film is its edited well and no fat on the bone. The premise is set up early and the twist pretty disguised for the ending as the supernatural element arrives. The writing is strong and funny and the little known actors clearly embracing the script s they finally got something decent to kick start their careers. Michael Socha has real charisma in his comic role and the girls smoking hot on screen. This is a genuine grown up horror comedy that should be sort out.