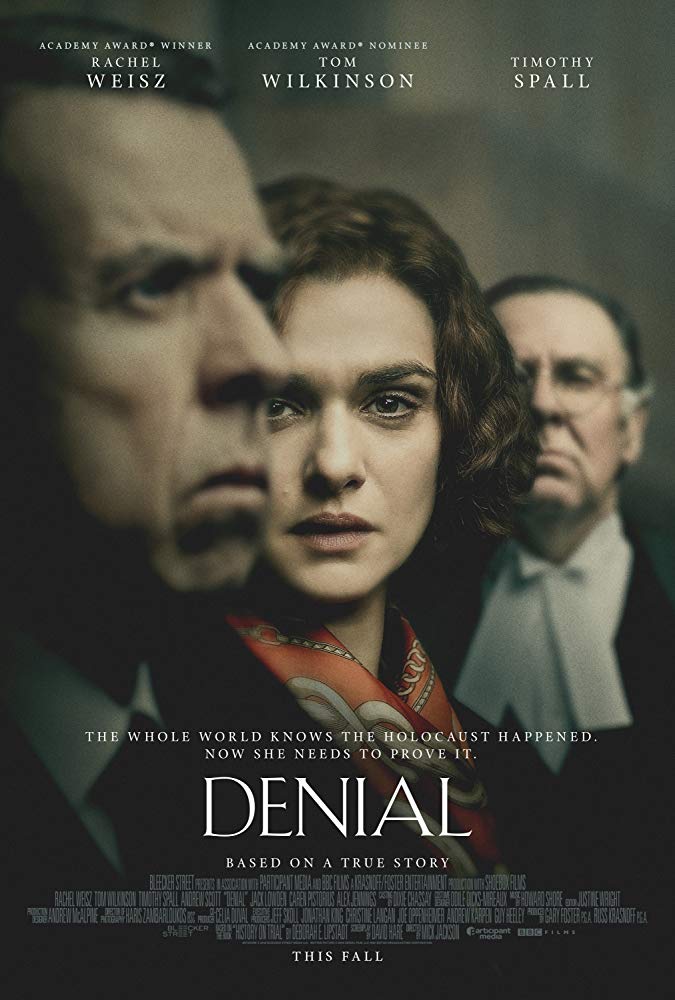 I don’t know what’s gong on with Holocaust deniers but could you attention seek somewhere else please? It’s absurd that people don’t think 90% of European Jews were exterminated, along with similar percentages of Roma gypsy, homosexuals and disabled people etc across Europe during the war. It’s a hell of a job to fake that! It’s pretty clear the Nazi Aryan race just wanted to wipe out anyone they felt superior to because they could. Maybe they chose Jews to hate as they are jealous of how their ability to recover from that time to be the superior and wealthy race today? It’s hard to think of any other reason.

David Irving, a historian, is one of those deniers, the most notorious, and jailed in Austria for three years for that crime in 2006. This film is an account of the infamous Irving V Lipstadt trail in London where he sued the female writer for libel for comment in her books on him. It got a lot of media coverage as he was a serious historian, the very credibility of the Jewish struggle on trial.

Rachel Weisz, a beautiful British and part Jewish actress – and the wife of James Bond – plays Lipstadt whilst Timothy Spall plays Irving. All of the spoken word of the trail in the court room movie is verbatim from the actual trial. Authenticity is the key here to both film and trail.

American Historian and author Deborah Lipstadt (Rachel Weisz) is delivering a lecture in London when she is interrupted from the back of the hall by David Irving, the notorious Holocaust denier. He accusers of her of libel for calling him a denier in her books and offers her £1000 to debate the Holocaust in public and so prove it’s real. He lives of this sort of publicity. In the UK, the burden of proof in a libel case lies with the accused. Lipstadt and her legal team led by solicitor Anthony Julius (Andrew Scott) and barrister Richard Rampton (Tom Wilkinson) must prove that Irving had lied about the Holocaust to win the case.

The legal team gathers and plots to discredit Irving, rather than use Lipstadt written facts in the trail and so make it about her integrity. She is furious about that and the fact survivors would also not be allowed to speak at the trial upsets her more. But her team is good and she must listen to them as their plan begins to work and Irving contradicting himself in court. The stakes are high if they lose the case as the public may turn on Jews and the integrity of Holocaust history as the gavel slams down.

There always seems to be an obligation by Hollywood and the entertainment industry to hype up the integrity of films about the Holocaust. They are almost scared to disrespect those films due to so many Jewish talent connections in the industry. Denial did pick up a perfunctory BAFTA nomination but not much more and to be fair the reviews of this are better than the film. It’s OK and nothing more.

The problem is it doesn’t really go into the drama of the case or the intricacies of the legal trail and facts and lies explored and concentrates more on a rather hammy turn by Weisz and lots of plumy English legalize. I would like to no more of the Irving argument on how on earth he and the rest think the Holocaust was faked but we don’t get that. We get bits and pieces on chimneys and vents in the gas chambers and almost as if the film also doesn’t want to go there on areas that may cast doubt. That would have been the interesting film I hoped for.

It cost $10 million and did $8 million box office and so clearly didn’t engage the first round of cinema audience for it to get good word of mouth. Some court room dramas can be gripping but not this one. It just lacks the intelligence and drama of the original trial and cops out in order not to offend anyone. Its ironically an oversensitive film around a topic that’s over-sensitivity is the point of it. I would catch it on TV but no more.