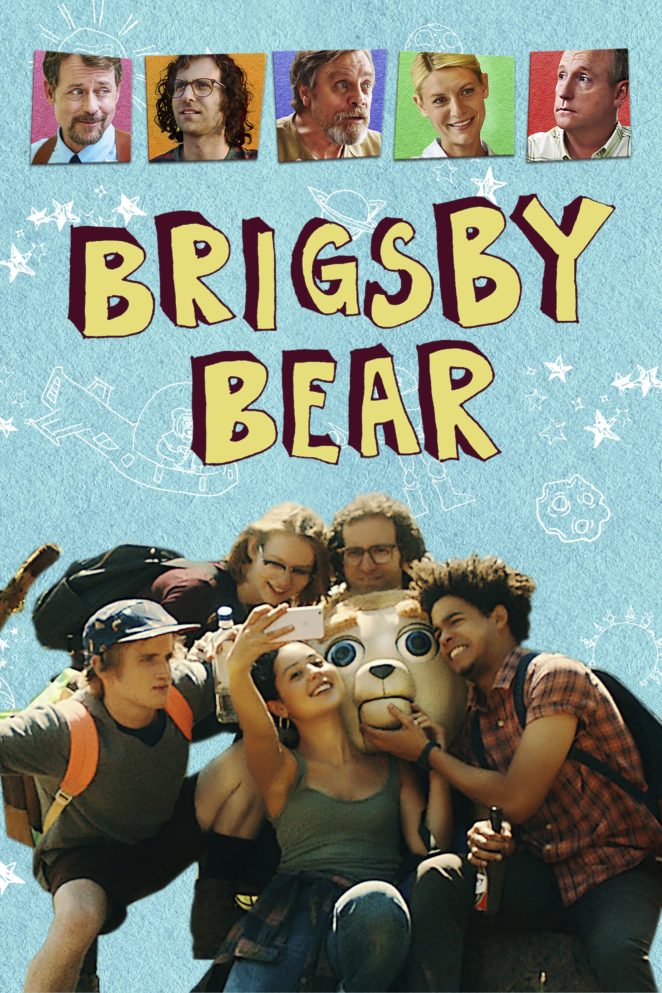 I like quirky movies and this is certainly one of them. The lead is a space traveling bear and a man with a 80s bubble perm is his co-star, all you need know about this one. Not the obnoxious bear that swears, talks, swigs beers and takes drugs with Mark Wahlberg but Brigsby Bear, the star of a TV show watched by just one person, the set up for this rather oddball adult comedy film.

It’s the debut feature from Dave McCarey and boosted by experienced writer Kyle Mooney, a quality little comedy that is unconventional yet star packed in the lesser roles, part of its charm. Mark Hamill agrees to send himself up here and a nice little unexpected turn by Greg Kinnear. They obviously jumped on board because the script was classy and the director one to be on the right side of in the future, a real talent. My job is to tell you about films exactly likely this that will be buried on some movie package on page 70 if I don’t.

Geeky, bespectacled thirtysomething James (Kyle Mooney) lives in an underground home out in the desert with his parents Ted (Mark Hamill) and April Mitchum (Jane Adams). James’ only connection with the outside world is an educational children’s show called Brigsby Bear, which he has been watching for most of his life in the same bunker. Not surprisingly James is obsessed with the show, owning every episode on VHS tape and filling most of his bedroom with Brigsby memorabilia.

One night he sneaks out of the secure bunker with a door code to hang out on the roof, always instructed to wear a gas mask so not to breathe what he believes to be poisoned air. But flashing blue lights fill the horizon approaching the house as James runs back inside to sound the alarm. The police arrive and Ted and April arrested as James told he doesn’t need a gas mask anymore as there is nothing wrong with the air, which quickly proves the case.

At the police station a confused and bewildered James is told the truth about his sham life by Detective Vogel (Greg Kinnear). He is informed that Ted and April are not his real parents, and that he has been held captive by them ever since he was a baby. It gets worse for James when he is told that Brigsby Bear is not real to the outside world, the TV show entirely made up by the Mitchums to entertain James.

Det Vogel then introduces James to his real parents, Greg and Louise Pope (Matt Walsh and Michaela Watkins), and their bookish 17-year-old teenage daughter Aubrey (Ryan Simpkins). As they try to acclimatize James to his new life and the world around him, he cannot stop thinking about Brigsby Bear not being real.

Aubrey begrudgingly takes James to a party, fearing embarrassment for both of them. The rather awkward and innocent James is a surprise hit and starts talking about Brigsby Bear to the kids at the party and comes up with the idea to make a movie based on the character to end the saga. Young film studies graduate Spencer (Jorge Lendeborg Jr.) warms to James and his TV Sci-Fi bear and agrees to make the movie with him. James is infectious and even Vogel is drawn in and agrees to lend some of the props from the show from the evidence room, and if there is part going, perhaps include him in the film, a bit of an amateur actor in his college days. When Spencer starts uploading episodes of Brigsby Bear to YouTube, it becomes a smash hit, generating a new audience to the show and buzz for the movie. But is this unreality good for James mental health?

It did just 600k in the cinemas last year but a lot better than that. It featured in a few top 50 movies of 2017 to increase your interest and definitely one of those American comedy dramas that’s not depressing or worthy for once with the melancholic soundtrack.

From the obtuse lead role to the abstract ideas here it’s nice to see something a little more original in the genre. It’s sort of in that Lars and the Real Girl role, if you have seen that one, oddball made right.

The very un-leading man Kyle Rooney with his double-glazing glasses and bubble power perm feels counter intuitive as a person of interest in a movie unleashed on the world but groves into the role as we begin to warm to him. Good support from the lesser actors allows Greg Kinnear and Mark Hammil’s cameos to have more impact. It never ceases to amaze me how far Luke Skywalker has fallen since the 1980s.

So a good fun and well written comedy that exploits a good script and wraps with a nice bow at the end. It’s feel good but also different and anti mainstream and that gets my vote every time.