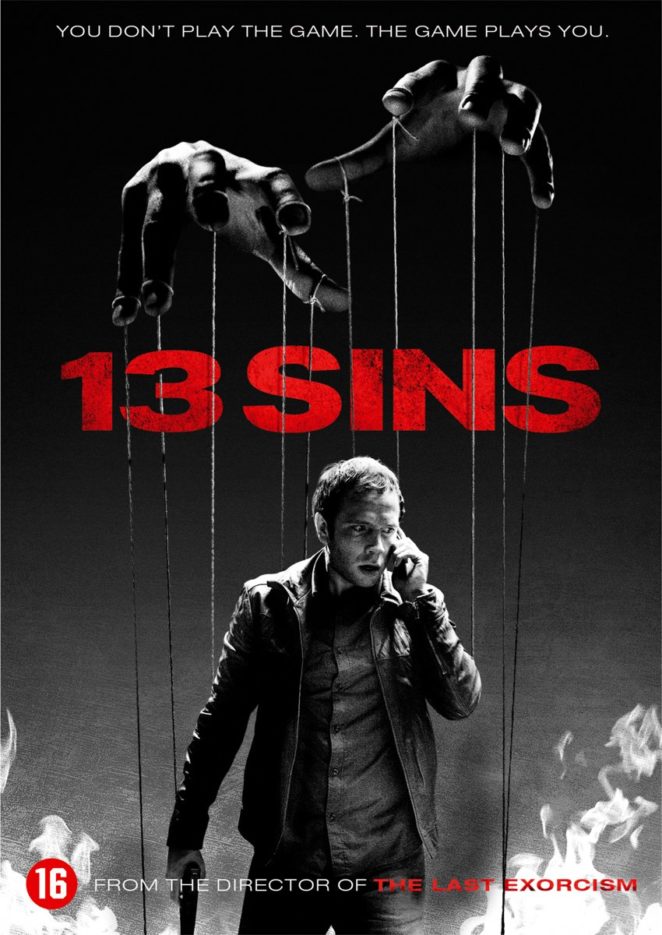 So 13 Sins, a remake of the Asian Extreme movie 13 Beloved, a psycho horror movie from America with a good twist and clever plot idea. It’s kind of like the recent movie ‘Nerve’ where kids get hooked into online challenges to win money but far more sinister here.

General sap and life’s loser Elliot Brindle (Mark Webber) has just lost his sales job. He has debt, a pregnant wife to be (Rutina Wesley) and his mentally handicap brother Michael (Devon Graye) to take care of, and an abusive father running him down all the time.

Elliot receives a mysterious phone call that offers him $1,000 to kill a fly that has been harassing him. For some reason he doesn’t dismiss the crank call and kills it, $1000 appearing in his online account straight after. What’s going on here? After been credited, he accepts the next challenge: to eat the dead fly. He does and $2000 appears in his account seconds later. How did the caller know he ate it? The caller explains that if he agrees to play the game he will be offered a total of thirteen challenges, each of which will result in increasing rewards, millions if he does all 13. If he fails to complete any of the 13, or medals in the game, or reveals the game to the authorities, he will lose all the money accrued at that point.

The challenges soon attract the attention of those authorities. He is asked to make a child cry at the park, burn something at a church and scamming a homeless person, and that’s just for starters. When the abused kid identifies Elliot in the local police station based on wanted person poster, Detective Chilcoat (Ron Pearlma) takes over the case.

It’s clear the man on the phone is watching Elliot’s every move. The sixth challenge is hardcore and with his misses becoming aware of his odd behavior the pressure rises. He needs that money for his family and can’t stop now. When he leaves evidence at the scene of one f his crimes he has to correct it somehow as the challenges ramp up and up. Whoever is on the other end of the phone line, he is pushing Elliot to the edge for a reason, and Elliot is rapidly changing as a person and starting to enjoy his challenges.

Although I wasn’t expecting much from this I enjoyed it. I had not seen the original and so bough into the plot gimmick and the neat twist at the end. This is not just a brainless slasher movie and plays with different ideas of coercion and greed. You really could see this method as being part of some sort of covert CIA Cyop from the 1960s. It probably would work on the meeker out there. If you are given big bucks to commit a crime and you don’t know who you mentor is and the money is pinging into your account etc then why not?

Ron ‘Hellboy ‘Pearlman is just a name to get the movie made and texts in his performance, no one else of note in the film. But it’s not about the cast but the idea, a film written, and ended, to set up the sequel. I would watch that sequel.  It does get a bit silly at times that allows the plot to be likewise so to it keep moving forward but who cares when finally some originality in an America horror movie. Its gruesome and funny in places but stays interesting and well made.

Enjoyable watch and one to look out for on you movie package or the cheap racks in the DVD stores.