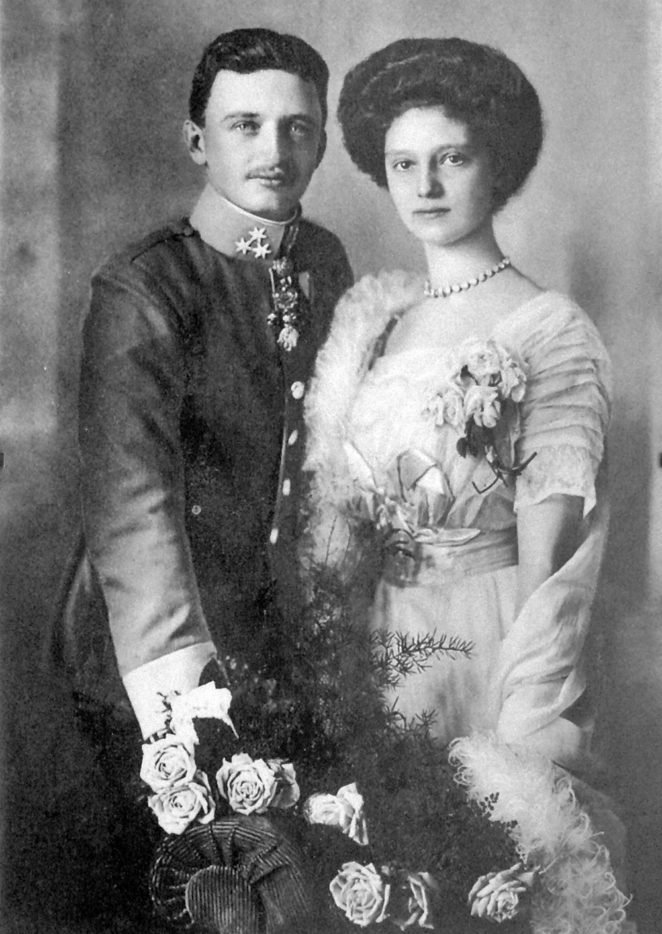 Zita Maria Grazia Adelgonda Michela Raffaella Gabriella Giuseppina Antonia Luisa Agnese was born on 9th May 1892 at Viareggio in northern Italy. As might be expected from someone with that number of names, she was born into an aristocratic family, her father being the Duke of Parma. However, her parents were not wealthy and her only chance of enjoying the sort of life that went with her name would be by making a suitable marriage into another aristocratic clan, but one that had a bit more money attached to it.

That is what she did, although the clan of which she became a member was not destined to provide her with an easy life.

In 1911, at the age of 19, she married Archduke Charles of Austria. Charles’s late father (Archduke Otto) had been the son of Archduke Karl Ludwig, the younger brother of Emperor Franz Joseph and the father of Archduke Franz Ferdinand.

Charles was therefore only a minor member of the Austrian imperial dynasty and had spent his earlier years pursuing a military career. His young wife Zita must therefore have thought that she had made an excellent marriage in becoming part of one of the most powerful royal families in Europe (the Habsburgs) and able to enjoy all the benefits that this brought but with no specific responsibilities.

However, her life of privilege and luxury, semi-detached from the world of politics, would not last long. After only three years of marriage her husband’s uncle, Archduke Franz Ferdinand, was assassinated while on a visit to Sarajevo and Europe soon became embroiled in the “Great War”. Not only that, but Charles now became the heir apparent to Emperor Franz Joseph.

Two years later the Emperor died at the age of 86. Charles was now Emperor in his place, at the head of a vast empire in the middle of a war that threatened to pull that empire apart. Zita – the daughter of an impoverished Italian duke – was now the Empress consort of Austria and the Queen consort of Hungary, Bohemia, Dalmatia and many other parts of the empire.

After another two years, the empire did indeed fall apart with the defeat of the Central Powers that included German and Austria-Hungary. All of Charles’s royal privileges disappeared, and so, therefore, did Zita’s. The former imperial family were forced into exile, although Charles refused to abdicate. They eventually found a permanent home on the Portuguese island of Madeira, where Charles died in 1922 at the age of only 34. At the time of his death Zita was pregnant with the last of their eight children.

There are parallels between ex-Empress Zita and Queen Victoria, in that both were utterly devoted to their husbands, who died young having fathered large families, and both continued to mourn them for the rest of their long lives. Both widows never again wore anything other than black.

Zita died on 14th March 1989 at the age of 96, having spent her years of exile in Switzerland and the United States. She never forgot that Charles had not abdicated his throne and continued to believe herself to be an Empress and Queen. It was therefore fitting that she was granted a state funeral in St Stephen’s Cathedral, Vienna, with all the ceremony due to a Habsburg monarch. She shared her burial place in the cathedral’s crypt with 142 other members of the dynasty.