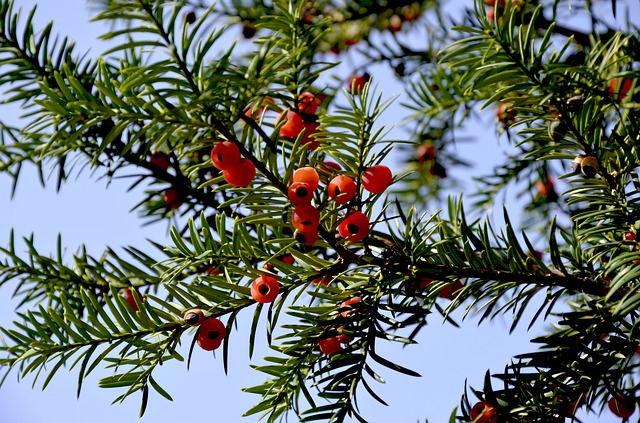 The yew is an evergreen tree that grows red berries. It is related to other conifers like pine, spruce and cedar. Yew is a popular landscaping tree that is very popular in making topiaries. But it is also quite often planted in cemeteries or next to gravesites. Tennyson wrote about such a tree in his poem, “In Memoriam A. H. H.” It was an obituary for his best friend.

In Memoriam A. H. H.BY ALFRED, LORD TENNYSONOld Yew, which graspest at the stones That name the under-lying dead,Thy fibres net the dreamless head, Thy roots are wrapt about the bones. The seasons bring the flower again, And bring the firstling to the flock; And in the dusk of thee, the clock Beats out the little lives of men. O not for thee the glow, the bloom, Who changest not in any gale, Nor branding summer suns avail To touch thy thousand years of gloom: And gazing on thee, sullen tree, Sick for thy stubborn hardihood, I seem to fail from out my blood And grow incorporate into thee.

Why are these beautiful trees often found in cemeteries? It could be because the lovely topiary displays are popular in parks and green spaces. But it’s more likely that the tradition comes from the ancient Celts. The yew tree is one of the Druid’s sacred trees; it was associated with immortality. It’s understandable that people in the British Isles would plant these trees in the places where they buried their dead.

Images: Yew trees pictured on this page are by photographers Bob Embleton and Maigheach-gheal. They are from the Geograph.org.uk website and are used under Creative Commons licensing (CC BY-SA 2.0) You can click on the “Source” links to learn more.