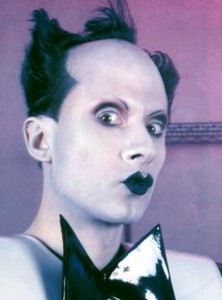 We could not talk for days about all the revolutions that have taken place in New York in the late 70s. Alas, I was not analyzed in detail – but the fact is New York often been (and still is) the place to be as far as subculture. Simply, there have always been allowed more bizarre and more experimental stuff than elsewhere. Many of them were incredibly short and effective, yet to date unrepeated. Klaus Nomi is somebody you probably have not heard yet, paradoxically, someone whose career can not leave anyone indifferent.

70s was marked by a fascination with aliens. Apocalypse. Hedonism, all lived their days as if they were the last, not only for them but also for humanity. Experimented with how substances and with authentic forms of expression. And so, in 1978, in a smoky club in New York took place four-day event where they performed underground anonymous and named “New Wave Vaudeville”. That evening, clouds of smoke emerged from the intense eye makeup man in transparent plastic raincoat who sang an aria Camille Saint-Saens. Someone in the audience, instead of “when is this,” he asked, “what is this”. It was – Klaus Nomi.