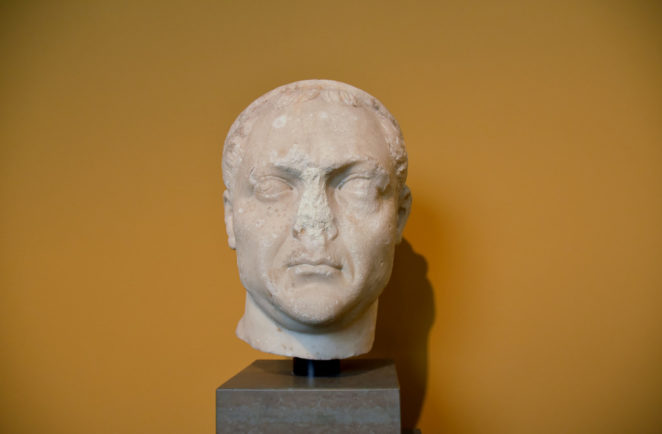 The later Roman Empire produced a number of emperors who might be considered to have failed in their role, but only one manged to get himself captured by a foreign enemy and end his days as a prisoner. That was Valerian, whose reign lasted from 253 to 260.

Publius Licinius Valerianus was born in the year 200 or thereabouts. It is known that he was a consul at some time in the 230s and that he held the post of “princeps senatus” in 238, but little more is known about his early life.

Gallus was killed by his own troops at Terni (Umbria) in August 253 and the same fate befell Aemilianus the following month. The way was now clear for Valerian to be declared emperor.

Valerian decided, probably wisely, that the job of emperor was too much for one man, so he appointed his son Gallienus to rule jointly with him as co-emperor. Gallienus was given charge of the western empire while Valerian turned his attention eastwards.

As far as his management of affairs was concerned, Valerian offered nothing new. Plenty of mistakes had been made by his predecessors, but Valerian was perfectly happy to repeat them.

This included an insistence on religious uniformity throughout the empire, despite the fact that many people had settled within its borders that had come from outside them, and these people had brought their own customs and traditions, both religious and otherwise, with them.

One group that came in for particular opposition were the Christians. In 257 Valerian issued an edict that sanctioned the seizure of Christian property and the execution of those of their number who would not recant their beliefs. This produced a new wave of Christian martyrs, including Bishop Cyprian of Carthage.

However, Valerian’s enthusiasm for persecution was not shared by his son. Christians in the western empire had virtual freedom of worship at this time, which was certainly not the case further east.

Valerian’s traditionalism extended to defending the empire’s borders at all costs, but the Romans still failed to adapt their military style to cope with the more sophisticated tactics of their opponents, who practised what today we would call “guerrilla war” – mounting sudden raids and then retreating back into hiding. This failure to respond to changing conditions was a fundamental reason why the Roman Empire would never return to its glory days.

A major threat from the east

In 259 Shapur, the leader of the Sassanid Empire in what is now Iran, Iraq and Afghanistan, threatened to invade the empire yet again. Shapur advanced into Syria, defeated a Roman army, and captured many cities including Antioch.

Valerian set off with an army but this proved to be no match for that of Shapur. Valerian could not count on the loyalty of all his troops, many of whom were suffering from illness. When the Romans confronted the Sassanids at Edessa they came off second best, but far worse was to follow.

Valerian decided to meet Shapur face to face and sue for peace. However, this was a trap and Shapur promptly took Valerian prisoner, along with the senior officers who had accompanied him to the meeting. The emperor was clapped in chains and carted off to Persia. He never returned to Rome.

What happened to Valerian?

The answer to that question is – nobody knows. There is a story that says that he was thoroughly humiliated by Shapur and even made to act as the latter’s mounting block when he got on his horse. However, this and other stories were put about largely by later Christian writers who delighted in blackening the character of their former persecutor and were only too happy to point to the fate that befell their pagan enemy.

Other evidence suggests that Valerian and his men were not badly treated and were able to live out their days in relative comfort. Some Persian sources state that the Romans acted as consultants on various engineering projects including bridge building. It would appear that Valerian died at Bishapur in Iran a few years after his capture, probably from natural causes.

One thing that did not happen was a concerted effort on the part of Gallienus to get his father back. He did not offer to pay a ransom, and he certainly did not threaten an invasion of Iran as a rescue mission. Instead, he merely claimed the whole empire as his to rule.