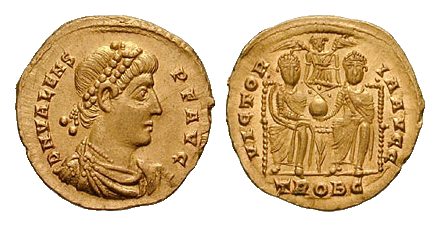 Flavius Julius Valens was the younger brother of Emperor Valentinian I, by about seven years. Born in 328 in what is now Croatia, he was the second son of Gratian the Elder.

Although Valentinian held important military commands under Emperors Julian and Jovian, Valens stayed mainly on the family estate although he did accompany his brother on Julian’s ill-fated foray into Persia in 363-4.

Valens only came to public notice when his brother was unexpectedly elected Emperor by the troops after the sudden death of Jovian. Valentinian, quite wisely, decided that the job was too big for one man to do and asked that Valens should share it with him. Valens therefore became Emperor of the eastern half of the Roman Empire on 28th March 364. Based in Constantinople he had jurisdiction over the provinces bordering the eastern Mediterranean and extending towards Persia. The eastern Balkans, as far north as the Danube River, were also part of the Eastern Empire.

The two halves of the Empire were run as separate units to all intents and purposes, with very little contact between the governments in Rome (or wherever the Emperor and his officials chose to base themselves) and Constantinople. When Valentinian fell dangerously ill in 367, the discussions over a possible successor did not involve Valens, and when Valentinian died in 375 and his son Gratian succeeded him, the subsequent proclamation of his much younger half-brother as co-Emperor was carried out without Valens being asked to agree to it. 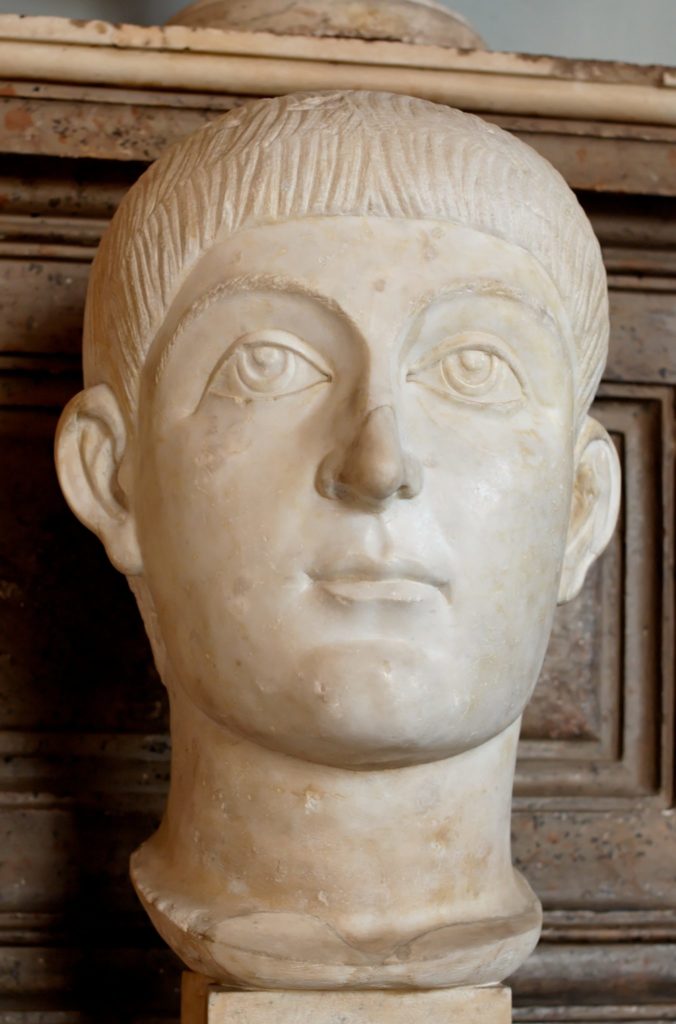 The main issue to face Valens during his reign was the threat of an invasion from Goths who lived north of the Danube but who were threatening to cross over into the Empire. After a number of battles against the Gothic tribes, a truce was concluded in 369 according to which the Goths agreed to stay north of the Danube, but they then came under severe pressure from the Huns and sought refuge within the Empire.

The Gothic tribes in question were the Tervingi and the Greuthingi. Many of the Tervingi had abandoned their lands and sought refuge among the Greuthingi. When the Greuthingi also sought to escape from the Huns by moving across the Danube, their numbers were therefore greatly swelled by the neighbouring Tervingi who were incorporated with them.

In principle, Valens was not against allowing the Goths to cross the Danube, as he saw them as a potential source of recruits for the Roman army. However, he hoped to regulate their numbers by only allowing the Greuthingi to settle in the Empire, which might have worked had it been possible to control the situation by assigning enough troops to separate the two tribes and monitor their entry.

As it was, most of Valens’s troops were stationed on the eastern borders where the Persians were a constant threat, so it was impossible to prevent far more people crossing the Danube than had been intended. The situation was made worse by the food supply network being totally inadequate to cope with a sudden influx of so many hungry Goths.

Relations between the Romans and the immigrants broke down completely. Instead of the expected 30,000 to 40,000 people, around double that number were now swarming across into a relatively small area south of the Danube.If the Goths could not be contained, they would have to be countered on the battlefield.

Valens sought in vain for help from his western colleagues. Merobaudes, the military commander in the western Balkans region that was nominally ruled by Valentinian II, was more interested in securing his own borders against any incursions by the Goths. Gratian, Valens’s nephew, might have been willing to send troops east but had problems of his own in the form of an insurrection on the lower Rhine.

It was not until 378 that Gratian was able to help, but by the time he could advance eastwards Valens had taken action on his own behalf, with fatal consequences.

By August 378 the Goths had advanced into Roman territory as far as Thrace (modern Turkey-in-Europe). An army of some 30,000 men encamped at Adrianople, which is where Valens’s force of 30,000 to 40,000 men met them on 9th August after an eight mile march from their camp. The Roman left advanced and was routed by the Gothic cavalry, which then encircled and destroyed the Roman centre. The defeat was total, with up to two-thirds of the Roman soldiers being killed.

Valens died along with his troops, although his body was never found. There was a story that he was wounded and taken to a farmhouse which was later set on fire, thus cremating his remains. Whatever the truth of this story, the Battle of Adrianople was certainly one of the worst defeats ever suffered by a Roman army.

Valens is also notable for having been a proponent of Arian Christianity, as opposed to the Trinitarian Catholicism that had been sanctioned by the Council of Nicaea in 325. In this he had differed from his brother Valentinian, but unlike his brother had been less tolerant of opposing views. There was therefore a degree of persecution of Catholic bishops in the Eastern Empire during Valens’s reign. However, Theodosius, his successor in the east, was a Catholic, so Arianism in the Eastern Empire died with Valens.