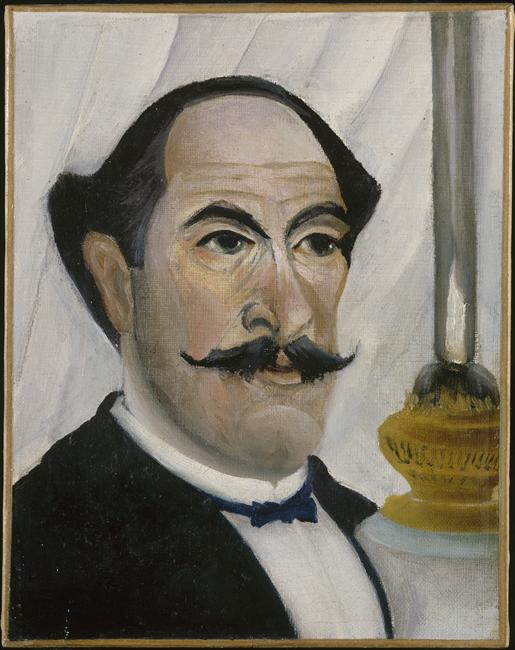 Henri Rousseau’s work is instantly recognisable and much admired today, but in its own time his “naïve” style was often ridiculed and he found it extremely difficult to get the recognition that he was convinced he deserved.

Henri Rousseau was born in the Loire Valley of France in 1844 into a working-class family that often found it difficult to make ends meet. After spending four years in the army he moved to Paris, where he worked as an official who collected roadside tolls for the municipality. His later nickname was “Le Douanier”, which suggests the more exalted role of customs officer, but this was an exaggeration.

Rousseau was certainly prone to overstating both his background and his artistic “genius” – as he saw it.

Painting was something that he turned to later in life, having shown no talent for it in his early years. He did have a little formal coaching from two established artists, but was largely self-taught. He learned much of his technique by copying works of art in the Louvre and he began to produce his own work from around 1880.

The Paris art scene was highly controlled, such that artists could only really succeed if their works were chosen for exhibition in the established “salons”. This was impossible for Henri Rousseau, so he depended on the “Salon des Independants”, which did not vet the entries but only required the payment of a fee. Rousseau became a regular contributor from 1886 but had to wait a long time to be taken seriously by the artistic establishment. However, by the time of his death in 1910 he was being appreciated by artists including Matisse, Picasso and Toulouse-Lautrec.

For his subject matter, Henri Rousseau chose Paris street scenes, images seen in books and a heavy dose of imagination. 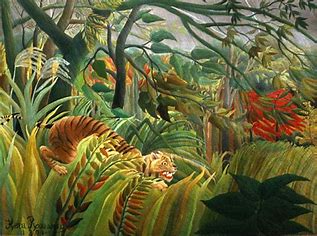 A good example of the latter is Tiger in a Tropical Storm (also known as “Surprised”) that was first exhibited in 1891. Rousseau claimed that the scene owed much to his experience abroad during his years in the army, notably in Mexico – although that would not have accounted for the tiger! In fact, his army career – as a bandsman – did not take him overseas and he never set foot outside France in his entire life.

The tiger was seen in the Paris zoo and the exotic plants in the Jardin des Plantes.

Rousseau’s technique was to work from the background to the foreground and paint layer upon layer, using a huge range of colour shades to give an impression of depth and to suggest the lushness of the jungle.

As a final touch he trailed strands of silver paint across the canvas to depict the slashing rain and add to the three-dimensional effect.

With each leaf and blade of grass painted in meticulous detail, this painting is far removed from the style popularized by the impressionists of his day, which was one reason for the derision Rousseau received from some quarters. One might also take issue with some of his construction – the positioning of the tiger’s hind leg and tail in relation to the plants that they are either in front of or behind does look distinctly odd, for example.

However, whatever criticisms one might make about Henri Rousseau’s ability as artist, it cannot be doubted that he did produce somehighly distinctive and enjoyable works, of which this is one of the best known.