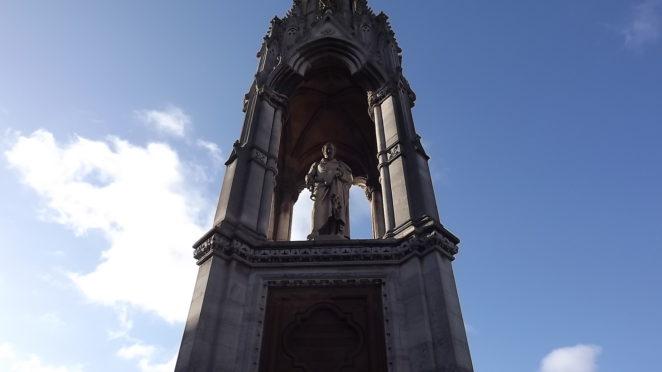 The story of the abolition of the slave trade in Great Britain is always linked with the name of William Wilberforce, and rightly so, but he was not the only person who deserves credit for this. One person who should be remembered alongside Wilberforce is Thomas Clarkson.

(Statue of Thomas Clarkson in Wisbech)

Thomas Clarkson was born on 28th March 1760 at Wisbech, Cambridgeshire, where his father was headmaster of the grammar school. Thomas was educated in his father’s school and went up to Cambridge University in 1779. He took a degree in mathematics in 1783. His intention was to take holy orders, so he stayed on at Cambridge for that purpose. In 1785 he entered a competition for an essay in Latin, and this was the key to his life taking a completely different direction.

The title set for the competition was “Anne liceat invitos in servitutum?” which translates as “Is it lawful to make men slaves against their will?” Clarkson decided to develop the theme in terms of the Atlantic slave trade, although at first he regarded the topic as a purely academic exercise. In order to write the essay he needed to do a bit of research, and the works he read, such as Anthony Benezet’s “Historical Account of Guinea” affected him deeply.

The slave trade, which began in the mid 17th century, was a brilliant device for making a lot of people very rich. It worked by ships making three voyages. They left British ports (such as Bristol and Liverpool) loaded with cheap manufactured goods such as pots and pans as well as guns and alcoholic beverages. These were taken to the coast of West Africa where native chiefs were happy to do deals, their payment being prisoners of war and other undesirables.The traders were also not averse to capturing “free” natives on their own account. The ships then headed west with their human cargoes, who were sold as slaves in the West Indies and the American colonies. With the proceeds, the traders then bought products such as sugar, rum and tobacco, all of which would find a ready market back in England.

As far as the British people were concerned, one set of products was exported and another set was imported. They had no need to know about the “middle passage” which was where the real damage was done in terms of human misery. Some slaves did make their way to Britain, where they were often used as domestic servants and regarded by their employers as exotic status symbols. These were the fortunate few.

Thomas Clarkson read his essay aloud in the Senate House at Cambridge and won his prize. However, when making his homeward journey on horseback (he was now living in London) he gave thought to the contents of what he had written. He later wrote: “I frequently tried to persuade myself that the contents of my essay could not be true”. However, his conclusion was that: “if the essay were true, it was time some person should see these calamities to their end”.

He now abandoned all thoughts of a clerical career and started work on a campaign to eradicate the slave trade. In 1786 he published his essay in an English translation and in 1787 founded a “Committee for Advocating the Abolition of the Slave Trade”. One of their first acts was to get Josiah Wedgwood, the pottery manufacturer, to design and produce a campaign badge that showed a manacled slave with the slogan: “Am I not a man and a brother?”

William Wilberforce, an MP from Hull, was recruited by the Committee in 1787 as their voice in Parliament, and the long process began of trying to change the law. Wilberforce made many speeches and produced copious evidence to support the cause, but what is not generally known is that it was Thomas Clarkson who gathered much of that material.

For example, he rode his horse to Bristol where he talked to off-duty sailors about their experiences on the slave ships and collected various pieces of equipment that were used on the ships to subdue their unwilling passengers. These included whips, branding irons, thumbscrews and mouth-openers. 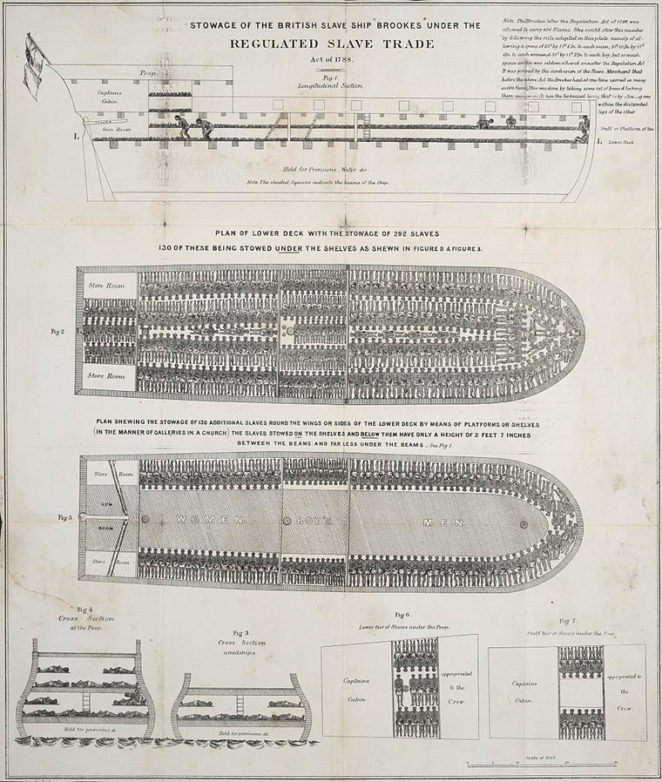 He went to Liverpool, another slave trade port, where he got hold of a diagram (see above) showing how the slave ship “Brookes” was loaded to contain the maximum number of slaves. More than 600 slaves could be laid down side by side and head to toe so as to leave hardly any space unused in the cargo hold. Under these conditions, with no sanitation, disease was rife and many Africans died during the passage (as did a disproportionate number of the sailors). Other ships knew not to steer downwind of slave ships, to avoid the stench.

Clarkson continued his travels and campaigning for seven years, riding about 35,000 miles in all. He set up many anti-slavery societies and organised petitions which gathered around 400,000 signatures. Some 300,000 people agreed to give up using sugar when they were told how it had been obtained.

His work was not without its dangers, as he was up against some very powerful vested interests which stood to lose huge fortunes if the slave trade ended. He had good cause to fear for his life, for example when he was thrown into a dock at Liverpool by some slavers.

In 1794 he retired from the campaign, being physically exhausted and running out of money, as he had financed himself from his private means during this time. It was also becoming difficult to keep people interested in the campaign, given that Parliament constantly refused to pass Wilberforce’s bill, plus the fact that war with Revolutionary France had broken out in 1793.

However, he returned to the cause in 1804 and continued to help Wilberforce until 1807, when the Slave Trade Act was finally passed.

The cause now was the complete abolition of slavery itself within the British Empire. Wilberforce and Clarkson again worked together to drum up support, and Clarkson rode another 10,000 miles as he organised hundreds of petitions to Parliament. Wilberforce’s health began to fail in the 1820s and he left the House of Commons in 1825, passing the abolitionist mantle to Thomas Buxton. Clarkson continued his work, helping to found the Anti-Slavery Society in 1823 and acting as an international ambassador for the cause as well as writing copiously. One of his aims was to end slavery in the United States.

Success finally came in 1833, with the Slavery Abolition Act being passed, although Wilberforce had died a month before this happened. Thomas Clarkson, who was 73 at the time of the triumph he had devoted his life to accomplishing, lived for another 13 years during which he continued to write in support of worldwide abolition.

It is unfortunate that such a high proportion of the credit for abolishing slavery has been given to Wilberforce, because it was truly a team effort. Many people worked for this cause, with Thomas Clarkson being one of the most effective and important.