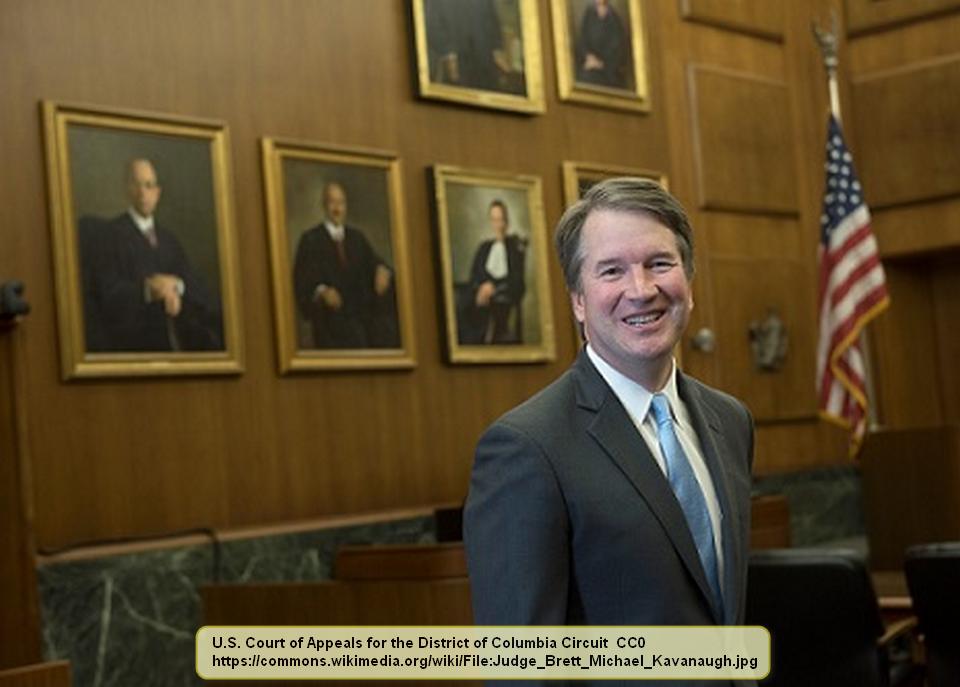 In the US, as of this date, one of the dominant news stories is in regard to confirming Judge Brett Kavanaugh to the Supreme Court of the United States. This is a big deal because the Supreme Court is the third part of the built-in checks and balances the founding fathers of the US put into place to make sure that the people would be in charge of the government and not the other way around. To that end, the constitution is extremely important.

In the process of confirmation for the judge, Mr. Kavanaugh has undergone a more rigorous examination than any other candidate of the supreme court. More documentation of his role as a judge has been turned in than with any other candidate. His background has thoroughly been checked several times by the FBI and other federal intelligence. His competence has never been questioned on either side of the aisle until just before the vote for confirmation took place. Mind you, the only “black mark” against judge Kavanaugh has been that he was nominated by our current President.

A woman came forward, at first anonymously, claiming that 38 years ago, Brett had attempted to rape her. Of course, this is a serious charge.

The news media immediately jumped on ship in condemning Judge Kavanaugh, even though all the witnesses that the accuser, Dr. Ford, identified have said that they don’t recall the party or the incident. The media is less inclined to mention that the accusational letter was given to the ranking Democrat on the committee at the end of July and nobody even questioned Judge Cavanaugh about it until just before the vote. Is this Coincidence? Hardly. The Democrats have done this before, in an attempt to block a nominee.

Voters, both Democrats and Republicans, have seen it as the travesty that it is. Less than a quarter of the people polled by numerous agencies believe that Dr. Ford is even credible. Yet, the news media has condemned Brett Kavanaugh as if he was guilty until proven innocent. Let’s make it plain; Kavanaugh has served with distinction for decades. Over 200 women, from high school, college, law school, and after he got his degree, have said that the judge is a truly honorable man who never did anything that was sexual or aggressive toward anyone. Most of the women who’ve said that have nothing at all to gain from saying it, publically. The media ignores these people.

Here is a letter by Judge Kavanaugh in regard to this matter:

When I testified in front of the Senate three weeks ago, I explained my belief that fair process is foundational to justice and to our democracy.

At that time, I sat before the Senate Judiciary Committee for more than 31 hours and answered questions under oath. I then answered more questions at a confidential session. The following week, I responded to more than 1,200 written questions, more than have been submitted to all previous Supreme Court nominees combined.

Only after that exhaustive process was complete did I learn, through the news media, about a 36- year-old allegation from high school that had been asserted months earlier and withheld from me throughout the hearing process. First it was an anonymous allegation that I categorically and unequivocally denied. Soon after the accuser was identified, I repeated my denial on the record and made clear that I wished to appear before the Committee. I then repeated my denial to Committee investigators—under criminal penalties for false statements. All of the witnesses identified by Dr. Ford as being present at the party she describes are on the record to the Committee saying they have no recollection of any such party happening. I asked to testify before the Committee again under oath as soon as possible, so that both Dr. Ford and I could both be heard. I thank Chairman Grassley for scheduling that hearing for Thursday.

Last night, another false and uncorroborated accusation from 35 years ago was published. Once again, those alleged to have been witnesses to the event deny it ever happened. There is now a frenzy to come up with something—anything—that will block this process and a vote on my confirmation from occurring.

These are smears, pure and simple. And they debase our public discourse. But they are also a threat to any man or woman who wishes to serve our country. Such grotesque and obvious character assassination—if allowed to succeed—will dissuade competent and good people of all political persuasions from service.

As I told the Committee during my hearing, a federal judge must be independent, not swayed by public or political pressure. That is the kind of judge I will always be. I will not be intimidated into withdrawing from this process. The coordinated effort to destroy my good name will not drive me out. The vile threats of violence against my family will not drive me out. The last- minute character assassination will not succeed.

I have devoted my career to serving the public and the cause of justice, and particularly to promoting the equality and dignity of women. Women from every phase of my life have come forward to attest to my character. I am grateful to them. I owe it to them, and to my family, to defend my integrity and my name. I look forward to answering questions from the Senate on Thursday.

If there is any doubt that the media is only interested in its own agenda which aligns itself with the liberals, this whole situation should end that question. The mainstream media has doubled-down once again, running with the liberal talking points that have no evidence and attempting to sway opinion in making a person guilty without any proof at all. The silliest part is that this not only slaps every woman who has truly been abused in the face, it also has nothing at all to do with the vote for confirmation.

Judge Kavanaugh has been fully investigated numerous times, during his rise through the ranks. No impropriety has ever been found. He has been admired by both Democrats and Republicans…until the President nominated him for Supreme Court. This is the division that was started with the last administration. Unfortunately, the news media seems intent on growing the rift that was started back then.

This could be a good indicator regarding the senators they vote for, though. Those that clearly buy in to this lie, even if they are perpetrated by the media, aren’t to be trusted.