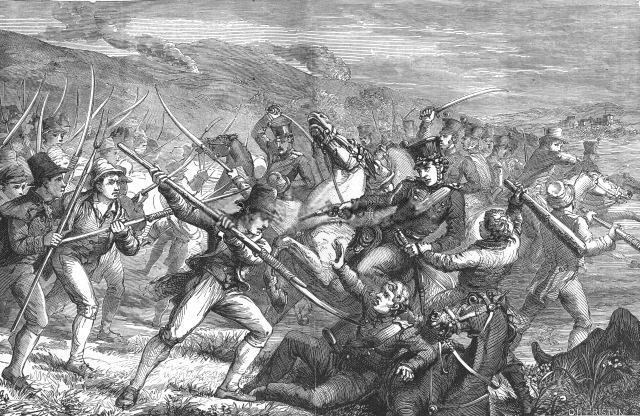 The Tithe War, Cogadh na nDeachúna in Irish and don’t ask me how to pronounce it, was not a war by any stretch of the imagination. It was a period of relatively non-violent civil disobedience stretching from 1831 to 1838. The state church, the Church of Ireland, a branch of the Anglican Church, not the Roman Catholic Church, decided it would a good idea to enforce a tithe on subsistence farmers as well as others for the upkeep of a church to which most Irish, being Roman Catholic, did not belong. The tithe was payable in cash or its equivalent in crops or livestock, a fact which didn’t make it any better for the Catholic majority.

For those of you not familiar with the concept of a tithe, it meant that the Roman Catholic farmers, who were barely making ends meet in the first place, were being told that they had to give 10% of your income to the Anglicans. Keep in mind we’re talking about the decade immediately preceding the Potato Famine. The Roman Catholic Relief Act, granting basic civil rights to Catholics, had just been passed in 1829. It allowed Irish Catholics to run for Parliament which meant it only befitted Catholics who were fairly well off. To make matters worse, in many cases the money went to Anglican pastors who didn’t even live in the area where the tithe was being collected.

The farmers came up with a great idea: don’t pay it. Sounds like a plan. The “opening shot” in the “war” took place on 03 Mar 1831 in Graiguenamanagh (again, don’t ask), County Kilkenny, when a force of 120 yeomanry (a soldier in the British Territorial Army) tried to seize cattle belonging to a Catholic priest. With the blessing of his bishop, he had organized the people to skirt the tithe by putting their stock in his name before selling it. The revolt spread.

On 18 Jun 1831, in Bunclody, County Wexford, resisters were fired upon by the Irish Constabulary. Twelve died and twenty were wounded twenty with one yeoman shot dead in retaliation. After this, warnings such as church bells were used to notify the people to round up their cattle and stock. On 14 Dec 1831 the warning was sounded allowing the citizens to ambush 40 Constabulary at Carrickshock (County Kilkenny). Twelve constables, including their chief, were killed with additional injuries.

Battles continued on a regular basis over the next couple of years. Essentially it was a guerrilla war with ambushes, vandalism, robberies and rioting. In part because it was becoming a nuisance and part because it was costing more to collect the tithe, the British government came up with a brilliant idea, in 1838 they ended the enforced tithe collections. Note that it was the collections they ended, not the tithe itself. Instead the farmer had to pay the money to his landlord as part of the rent. The landlord was supposed to pass it along to the officials. It took until 1869 when Parliament passed a law ending the Church of Ireland’s position as the official church for the tithe to end.