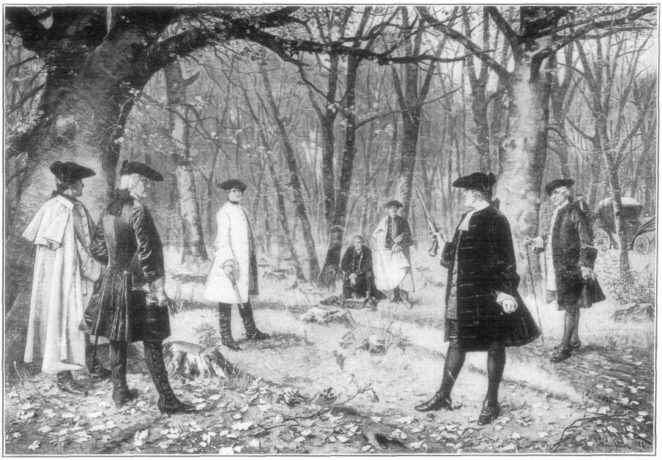 On 11th July 1804 Alexander Hamilton was fatally wounded in a duel fought against Aaron Burr, who was then Vice-President of the United States of America.

Hamilton was one of the founding fathers of the United States, but unlike George Washington, John Adams and Thomas Jefferson, he never became President.

Hamilton was a strong believer in a centralised United States, with the emphasis on ‘United’, but Aaron Burr, a fellow New York politician, was more interested in the ‘States’, preferring a looser confederation. This difference of opinion led to considerable friction between the two men.

Trouble flared in 1800 when there was considerable confusion over who should be President and who should be Vice-President. As the Constitution was at the time, it was up to Congress to make the decision, and Burr became convinced that Hamilton had thrown his weight behind Jefferson.

In 1804 Burr had further cause for grievance when Hamilton thwarted his attempt to become governor of New York.

Many cross words were said on both sides, with Hamilton accusing Burr of dishonourable behaviour. This led Burr to challenge Hamilton to a duel.

Duelling was forbidden in New York, so the opponents and their seconds crossed over to New Jersey. The duel was fought at the same place where Hamilton’s son Philip had been killed in a duel three years earlier.

The tradition of pistol duelling between gentlemen held that honour would be satisfied if both parties aimed to miss. Hamilton appears to have followed this tradition, but Aaron Burr did not. Hamilton was hit in the abdomen and died 28 hours later, despite the efforts of New York’s best surgeons to save him.

The affair did not end well for Aaron Burr either. He served out his term as Vice-President but held no further political office. History remembers Alexander Hamilton with much greater appreciation than is given to Aaron Burr.