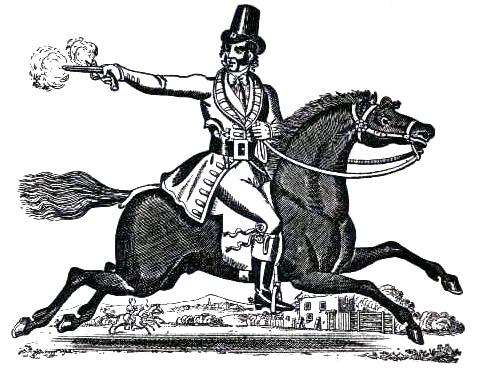 It is amazing how often people will believe something to be absolutely true when it is actually founded on pure fiction! That is almost the case with the legend of Dick Turpin, because the fiction was not completely pure – merely told about the wrong person.

What is the legend?

It is that an 18th century highwayman named Dick Turpin was able to escape justice by riding his horse Black Bess so fast from London to York – a distance of 200 miles in a single day – that nobody could believe that he had committed the crime of which he was accused. How could he have been in two places at so nearly the same time?

As a result of this feat Dick Turpin has become a folk hero alongside Robin Hood. An outlaw he may have been, but a romantic one. He would only rob rich people who deserved to be robbed, and would always be gracious and gentlemanly towards women. He is therefore the epitome of the noble thief.

What is the truth?

The truth is that Dick Turpin was a particularly nasty piece of work who was certainly no gentleman. He was not above committing murder when it suited him.

Yes – he did flee to Yorkshire to escape justice, but not in a single day. Once there he changed his name and resumed a life of crime, preferring to steal horses rather than rob travellers in coaches. He was eventually caught and hanged (in April 1739) and he decided to go out in style by turning his execution into a public entertainment – paying to be escorted to the gallows by five mourners, making a farewell speech to the crowd, and leaping to his death rather than waiting for the hangman to push him off the platform.

The other part of the truth is that there really was a highwayman who rode 200 miles to York in a day, but it was not Dick Turpin. His name was John Nevison, who lived in the 17th century, not the 18th.

Born in 1639, John Nevison was a career criminal who had many of the characteristics that would later be associated with Dick Turpin. He was tall and handsome and behaved like a gentleman – none of which applied to Turpin. It was also said that he only robbed the rich – but this is hardly surprising given that rich people have more money than poor people!

The ride to York took place after Nevison committed a robbery in Kent early one morning, crossed the Thames to Essex then rode north until he got to York, where he shook hands with the mayor at sunset. This escapade reached the ears of King Charles II who promptly gave him the nickname “Swift Nick” – despite being called John!

The story of Swift Nick was included by Daniel Defoe in his 1724 book “A Tour Through the Whole Island of Great Britain”, and that is probably the source of the error that led to the legend of Dick Turpin.

It is quite possible that Defoe’s book was read by the novelist William Harrison Ainsworth (1805-82) who wrote a number of historical adventure stories that were highly popular in Victorian times but are rarely read today. In the first of his books, “Rookwood” published in 1834, Dick Turpin appears and performs his famous ride on Black Bess, who collapses and dies from being over-ridden.

Ainsworth’s story became a bestseller because it appealed to the readership of the day, with many elements of gothic horror included in a fast-moving adventure. The character of Dick Turpin – although playing only a minor role in the plot – was particularly well drawn.

And therein lies the problem, because Ainsworth based his fiction on history but his readers were unable to tell which was which. Yes – Dick Turpin did exist, and the ride to York did take place, performed according to Daniel Defoe’s account, but Ainsworth decided to create a fiction that conflated the two. Black Bess, by the way, was complete fiction.

The myth that will not go away

“Rookwood” spawned a Dick Turpin industry, such that it became impossible to undo the fiction. Innkeepers along the Great North Road would, for decades afterwards, claim that Dick Turpin had stopped for a drink at their bar and Black Bess had taken water from their horse trough. At least they could not charge people extra for a sleep in the bed that Dick Turpin had used!

Even today it is hard to find people who do not associate Dick Turpin with the story of a gentleman highwayman who rode to York on Black Bess. I have even heard this stated as fact on a popular TV quiz show that stated in its credits that “all the information was correct at the time of recording”!

It just goes to show that some myths are very easy to grow and darned difficult to refute!