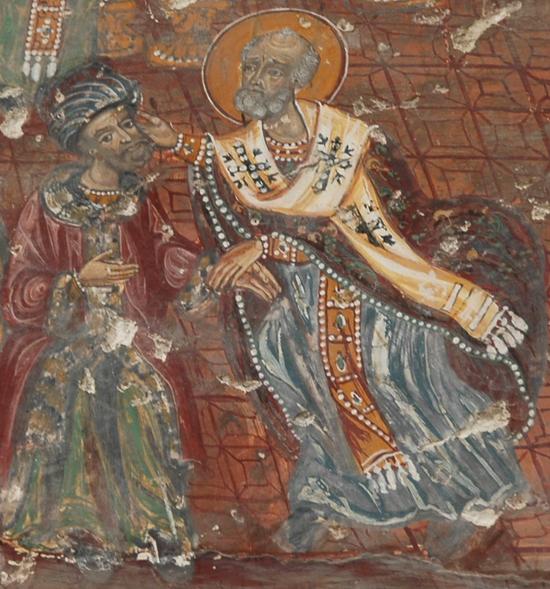 A fresco of St. Nicholas slapping Arius located at Soumela

As a bishop, especially one who lived in the area we know call Turkey, Nicholas would have been in attendance at the First Council of Trent in 325 AD. This council was called to settle the issue of the nature of Jesus. A priest named Arius (256 – 336) wrote that God the Father was divine in a way that Jesus was not. This was contrary to all that the church taught prior to that time. His error became very popular and the church, at the request of the Emperor Constantine met to settle the issue once and for all. (There were some other issues to be discussed but this was the most important.)

The discussion became very heated and Nicholas, who was not nicknamed “Jolly Old Saint Nick” as yet, approached Arius and punched him in the face. (We can assume Arius was also put on the ‘Naughty’ list.)

The other bishops did not take well to Nicholas’ action. He was stripped of his bishop’s garb and thrown into jail. He was to stay there until the council ended and his fate was decided.

That night Jesus and Mary appeared to Nicholas in prison. Jesus asked him why he was in jail and Nicholas answered “Because of my love for you.” Jesus gave him a copy of the Gospels and Mary gave him a replacement set of bishop’s robes. He spent the night in jail studying the Gospels.

The next morning the jailer found him unchained and dressed as a bishop. The Emperor Constantine was informed and ordered him to be freed. Nicholas was reinstated as Bishop of Myra.