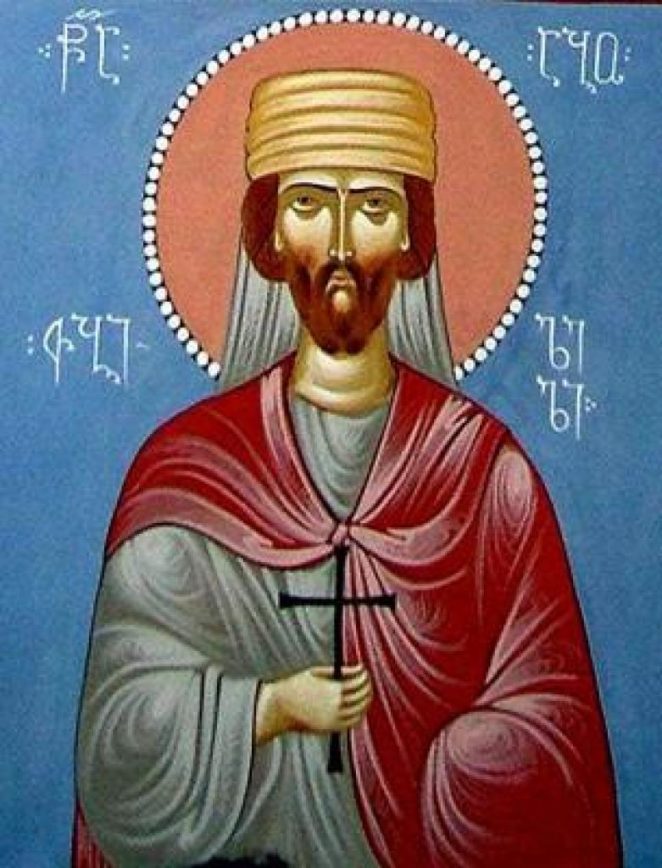 An icon of Saint Abo of Tiflis (Wikimedia Commons)

Patronage: The city of Tbilisi, Georgia

Abo of Tiflis, an Arab by birth, was born in Baghdad around the year 756. Raised a Muslim, he worked by preparing fragrant ointments. At the age of 17 or 18 he found himself in Tbilisi, having followed Nerses, the ruler of Kartla (present Eastern Georgia). Nerses had been slandered before the caliph and was imprisoned for three years at Baghdad. When a new caliph freed him, he took Abo with him.

Abo learned the Georgian language. His virtues earned him the love and respect of the people. He began to study Scripture and to visit churches. He was well-known for debating with the priests but was eventually convinced of the truth of Christianity. Since Georgia was under Arab rule Abo was afraid to be public about his conversion but he stopped participating in Muslim prayers and prayed as a Christian. He persevered in fasting and prayer and sought the proper moment to be baptized.

Nerses was again denounced before the caliph and summoned to Baghdad. Wanting to fleeretribution he journeyed north to Khazaria accompanied by 300 men including Abo. It was in Khazaria that Abo was baptized since this area was free of Muslim control. After several more months of following Nerses, Abo found himself at Abkhazia, another area outside of Muslim influence. He adopted a strict ascetic life, continually meditating upon the Scripture and attending church services.

His pious life came to the attention of both to the ruler and the bishop of Abkhazia. They often invited Abo for spiritual conversation, marveling at his deep faith and knowledge. Abo wished to shun earthly glory. He was impressed by the exploit of St. Anthony the Great and devoted himself to a life of quiet. Only after three months, on Easter Sunday, did he break his silence, glorifying and preaching the Resurrection of the Savior.

Nerses decided to return to Tbilisi and Abo followed him although the ruler of Abkhazia had entreated him to remain. At Tbilisi, then under the power of the Hagarenes, Abo openly confessed Christ the Savior drawing down on himself the anger of the Persians. Abo was imprisoned and tried. His captor tried to persuade him to return to Islam promising him of all sorts of riches and honors but Abo remained unyielding. On the ninth day of his imprisonment an angel revealed to Abo the day on which he would be martyred.

Abo was beheaded and his body was covered with naphtha and burned on the edge of cliff and his bones thrown off a bridge into the Kura River. Later the Tbilisi Metekhsk church was built on the site where this took place. John Sabanisidze, his biographer, says a pillar of light was seen rising from the water the next day.