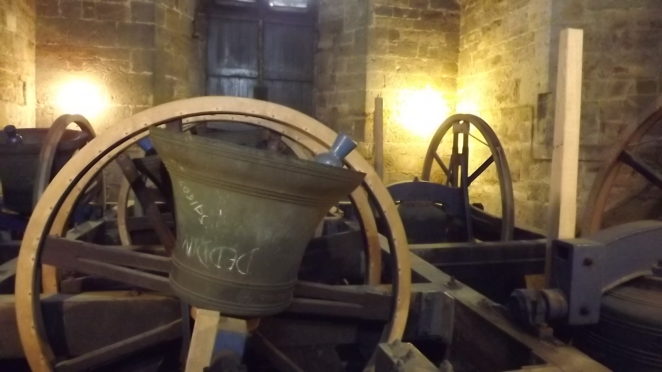 There is something very English about the ringing of church bells. Time was when every parish church, whether urban or rural, had a peal of bells in its tower that would be rung to summon the faithful to worship and on special occasions, such as a national celebration.

A peal consist anything from three bells to twelve or more, although eight seems to be a regular and convenient number in larger churches. The bells vary in size and weight and are therefore of different pitches. The “tune” that they play is arranged by the order in which the bells are rung, although “tune” is hardly the appropriate word.

The bells hang on a wooden frame so that they are free to swing in a complete circle by means of a rope that is attached to a wheel at the side of the bell and which then goes through a hole in thefloor of the belfry to the ringers’ gallery below. The bell has a clapper inside it that strikes the side of the bell when the bell is swung. Each bell rests in the upright position, and the action of pulling on the rope causes the bell to “fall” and resume its position by momentum. A “stay” prevents the bell from continuing to roll over. When the ringer gives another pull on the rope it will roll back in the opposite direction.

The ringers stand in a circle or semi-circle and time their rope-pulling so that each bell rings at precisely the right time in conjunction with the others. The art of bell-ringing is to pull the rope at exactly the right time and with the right force, so that the bell will always complete a full circle. A bell must never be allowed to fall back to the “down” position during a peal. To become an accomplished ringer takes a great deal of practice, dedication and not a little strength!

If a peal consists of three bells, there are six possible orders (or “changes”) in which they can be rung (1-2-3, 1-3-2, 2-1-3, 2-3-1, 3-1-2, 3-2-1). If another bell is added, the number of changes increases to 24, and each additional bell adds to that number in a geometrical progression. For a full peal of 12 bells, the number has increased to nearly 480 million! A change can only be rung in a certain time, because a bell can only swing at one speed, so it is possible to work out how long a particular set of changes will take. If the 12 bells perform all their changes, the ringers will only get a break after 30 years of continuous hard work!

Change ringing normally takes place on smaller peals and with more modest targets. Some of the more familiar change patterns have been given names, such as Grandsire Triple, Bob Major and Oxford Treble Bob, but what is possible depends entirely on the number of bells and the time available. It has been known for more than 20,000 changes to be rung, but to do that takes around twelve hours!

One problem with change ringing is that it is a very public art. A belfry is designed to make a noise, in that the bells are set some 30 feet (or more) above the ground in a space that is designed to broadcast the sound in all directions. Not everyone in a village wants to hear nothing but bells for hours at a time, so opportunities for ringing a long set of changes are limited in the modern world.

Another major problem is that a full peal of bells is expensive to maintain. Apart from the need to retune and occasionally replace a cracked bell, the bells themselves are very heavy. A tenor bell (the largest) can weigh as much as a small car. These lumps of metal swinging about put enormous strain on the frames in which they are held and the fabric of the belfries that contain them, and this has meant that some peals have had to be silenced and others can only be rung infrequently for fear of causing extensive andexpensive damage.

That said, the sound of bells ringing out across the English countryside, when it happens, is a particularly evocative one that can be heard in very few other places.