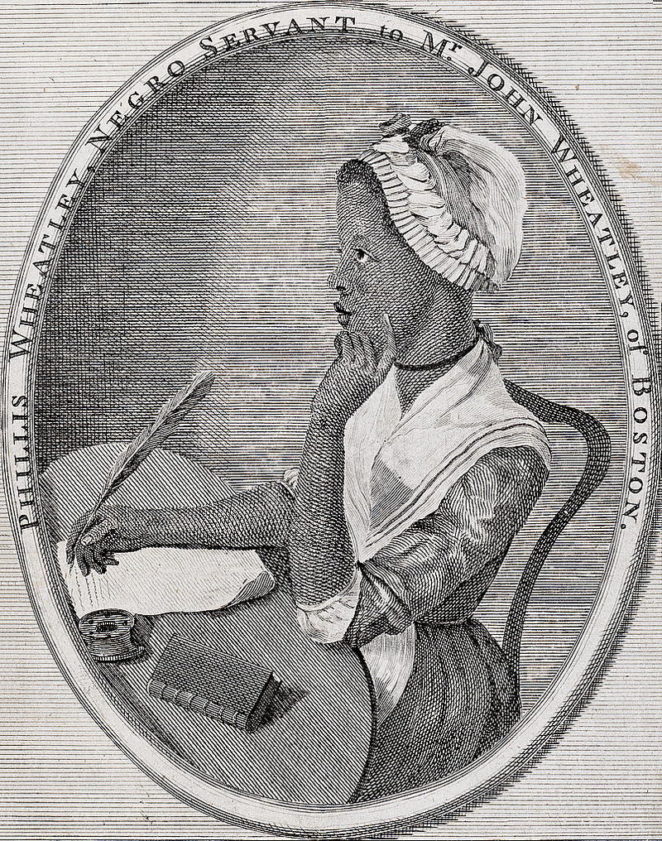 She was a young girl from West Africa who was bought as a slave in 1761 by the Wheatley family of Boston, who gave her the name Phillis. Nobody knows what her real name was, but as Phillis Wheatley she achieved fame as the first African American to become a published author.

Northern slaves were usually household servants and ladies’ maids, and Phillis clearly became a favourite with the Wheatleys, whose daughter Mary taught her to read and write. Phillis showed a liking for poetry and the family actively encouraged her interest.

The Wheatleys’ enlightened attitude was rewarded when Phillis began to write poetry that was clearly of a high standard. The result was a volume of verse entitled “Poems on Various Subjects, Religious and Moral”. Despite the backing of the Wheatleys, no Boston publisher would touch the work of a slave girl, so the book had to be published in London. This happened in 1773, following a visit to London during which Phillis met a number of prominent people.

The publication was a sensation, although there were a few doubters who questioned whether it was possible for a female negro slave to also be a poet. The book was to go through eleven editions before 1816, although Phillis did not gain much benefit from her new-found fame.

Soon after the book was published the Wheatleys gave Phillis her freedom. Phillis married a grocer, who was also a freed slave, but their life as a couple was not easy and they were far from well-to-do. Losing two babies was also a huge blow for her.

Phillis wanted to publish more poems, but this was extremely difficult, especially after the senior Wheatleys had died and Phillis could not afford the publication costs on her own. As a result there was no second volume although a few new poems did appear in various journals.

Phillis was forced to work as a scullery maid, and thus had to do work as a free woman that was much more physically demanding than what she had had to do as a slave.