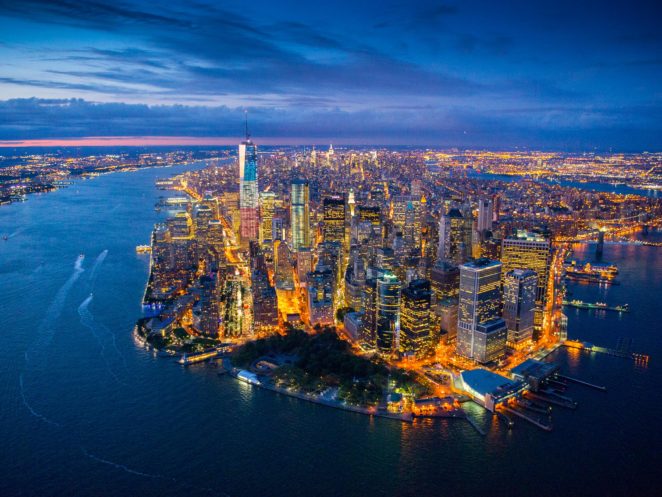 On 24th May 1626, a director of the Dutch West India Company named Peter Minuit, a Dutch-speaking German, bartered a consignment of pots, pans, fish hooks, tools and cloth, together worth around 60 guilders, for an island at the mouth of the Hudson River. The value of that island, named Manhattan (“island of hills”) by the local Algonquin tribe, has risen considerably between then and now!

Two years before Peter Minuit had joined them, the Dutch West India Company had established the colony of New Netherland in the lower Hudson valley and had landed its first settlers there who subsequently established small communities dotted around the bay into which the Hudson River empties. However, war broke between local tribes over the fur trade they were conducting with the settlers, and the purpose of Minuit’s purchase from the native Lenape people was to provide a safe haven for the settlers at its southern tip.

He called the settlement New Amsterdam and had a wooden fort built at its centre into which the settlers could retreat if they came under threat.

In 1631 the Dutch West India Company called Peter Minuit back to Holland and, after more adventures in the New World, some on behalf of the Swedish government, he was drowned in 1638 in the West Indies when his ship foundered during a hurricane.

Even without Peter Minuit’s leadership the colony of New Amsterdam went from strength to strength, but things changed in 1664 when the colony was under the despotic and controversial governor Peter Stuyvesant.

As a prelude to the second Anglo-Dutch War, the English King Charles II decided that it would be a good move to annex the territory of New Amsterdam and join it to other English possessions in North America.  A fleet of warships was duly dispatched. Control of the colony was duly wrested from the Dutch after usual combination of threats and assurances had been delivered and received.

The English crown now held a colony named New Amsterdam, which clearly unsatisfactory. The king’s younger brother James, the Duke of York, was Lord High Admiral and nominally in charge of the naval action that seized the colony, so changing the name from Amsterdam to York seemed to be an appropriate move. It was therefore not the case that the colony took its name directly from the city of that name, which was typically the case when settlers from a particular town or city in Great Britain established a settlement in the New World.

James, Duke of York, who would later succeed his brother as King James II, had a personal interest in acquiring New Amsterdam because he foresaw a good deal of money flowing his way if Dutch sea power could be destroyed. He was far from being alone in this ambition and was therefore extremely popular with those colonists who shared his point of view. The choice of New York as the name did not therefore meet with much opposition.

However, once he became king in 1685, attitudes towards James changed considerably. After a reign of only three years he was forced to abdicate the throne and leave the country. He was never popular in England, having acquired the nickname “Dismal Jimmy” in contrast to his flamboyant brother who became known as “The Merry Monarch”.

Despite his later fall from grace, New York stayed as New York and that also became the name of the territory that the colonists settled between the Atlantic and Lake Ontario. Not only that, but another city also owes its name to James. This is the capital of New York State, Albany, this having been James Duke of York’s other royal title.