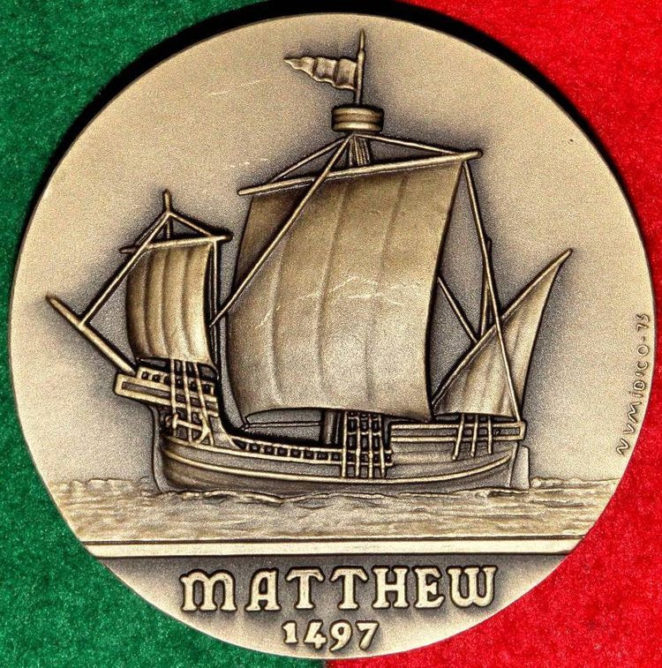 North America was a late bloomer when it comes to grand civilizations. Even though it was discovered as early as 1000 by the viking Leif Ericksson who reached the island of Newfoundland (Canada), North America was already populated by Indians and Inuits of course. There is also suggestions that it was discovered and populated by Polynesians, Chinese and other people of the East according to some research and DNA evidence. But that might be the object of another article.

As mentioned earlier, the Vikings were some of the first settlers of North America and a few of their settlements are preserved in Newfoundland which Leif Ericksson named Vinland. Christopher Columbus arrived in the Bahamas in 1492. Jacques Cartier made a series of voyages from 1534 and after claimed the St-Lawrence river and its surroundings lands for France. The French later built Quebec City and Port Royal.

Another explorer was John Cabot (in french Jean Cabot and in Italian Giovanni Caboto). Cabot was a merchant first, an explorer second. He was an Italian who organized and directed trips of discovery from Bristol to North America in 1497 and 1498. The oldest document where his name is mentioned indicates that he was naturalized as a citizen of Venice 1476 by a regulation which granted this privilege to foreigners who had resided in Venice continuously for 15 years and more.

From 1461 or even before, to January 13 1485 it is proved that John Cabot resided in Venice. As for the 11 years that followed during which he had to elaborate his travels to the West to the Indies, the testimonies remain circumstantial and equivocal. However, before the end of 1495, John Cabot arrived in England with a plan to reach the land of Cathay by the west, but by higher latitudes – hence by a shorter route he thought – than that by the zone traveled by Christopher Columbus. With respect to Cabot’s objectives and the means by which he proposed to achieve them, as well as the reasoning and the experience he brought to the project, we have only circumstantial evidence, as there are no written records from his hand and no text to which his name is apposed as the author.

So, Cabot landed in Bristol, England because since 1480, English explorers of this port (such as Croft and Jay) regularly went on quests for the island of Brasil. Bristol, England’s most westerly port, could provide Cabot with sailors who knew the winds and navigation, for a voyage of discovery of a passage to the west at his intended latitudes. At worst, the land that had already been discovered could well serve as station on a longer trip to Cathay.

On the 5th of March 1496, Cabot received letters patent from King Henry V11 for a voyage of exploration from Bristol. These letters, bearing the mentioned date, authorized Cabot and his three sons to sail with five ships to “all regions and countries and seas of the West, East and North”, thus excluding them from the areas of discoveries made by the Spaniards in the West Indies. However, they were also entitled to “discover and identify, in any corner of the world, all islands, regions or provinces populated by pagans or infidels and hitherto unknown to Christians.” The holders of these letters, (Cabot and his sons), were to take possession of all lands so discovered in the name of the King of England and they also enjoyed a few more privileges: no other subject of the sovereign could frequent the land discovered by the holders of these letters patent without their express permission.

In 1496, under the authority conferred to him by his letters patent, Jean Cabot left Bristol with a single vessel, bu he soon had to turn back due to a scramble with his crew, shortage of food and bad weather. Jean Cabot organized a second attempt, when he departed from Bristol in May 1497 on a ship name Matthew. The exact extent of Jean Cabot’s explorations has long been a debate among historians but here is a simplified version. The latitudes provided by second-hand accounts suggest that Jean Cabot would have landed in southern Labrador and on the northern tip of Newfoundland and would have continued south-east along the coast to the Avalon Peninsula from where he would have started his return journey.

However mixed up might be the accounts of the voyages of Jean Cabot, one thing that everybody agrees upon is the fact that Jean Cabot reported a new gigantic fishery outlet. In December 1497, the Ambassador of Milan in England said that he overheard Jean Cabot declare that “the ocean swarmed of fish which one could take not only from a net, but also in baskets descended along the ship with a rope.” He referred of course to cods whose abundance on the Grand Banks was to give rise to Newfoundland’s extraordinary fishing.

Henry V11 rewards Jean Cabot by granting him a royal pension in December 1497, as well as a new letter patent in February 1498, which gives additional rights to help him organize a new trip. These rights include the ability to charter up to six vessels. Then, eventually, a fleet of five vessels set sail in early May 1498. What became of them, though, is a mystery. But still, one of them must have returned because a map dated 1500 shows details of the coast with place names and English flags along with the inscription “The sea discovered by the English.” The map seems to indicate that John Cabot would have ventured as far as south of modern day New England and Long Island during this trip.

Although very poorly documented, John Cabot’s 1497 expedition provided the basis for British claims on North America. At this time, the westward explorations from Bristol between 1496 and 1506 approximately, as well as the one conducted by Sebastian Cabot (John Cabot’s son) around 1508, were probably considered failures. Their goal was to find opportunities to trade with Asia, not new fisheries, which albeit, everybody was ecstatic about especially after hearing about the abundance of the banks of fish. Instead of a passage to Asia, John Cabot and others including his successors found a huge landmass blocking the passage to Asia but that would eventually bring a wealth in furs, timber, animals, minerals (including coal) etc. and also huge areas of untamed lands ready for the pickings.