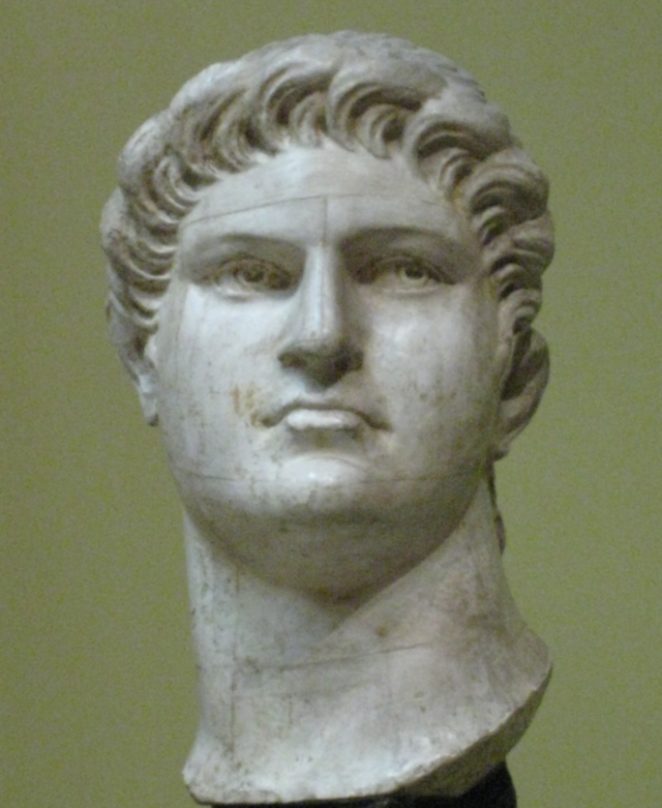 Nero was born on 15th December 37 AD, the son of Gnaeus Domitius Ahenobarbus and Agrippina the Younger, who was the sister of the notorious emperor Caligula. When Ahenobarbus died (of natural causes) in 40 AD, Agrippina married her uncle, the emperor Claudius,who adopted Nero as his own son in 50 AD.

It was unlikely that Nero was going to turn out to be a model emperor when his turn came, given the genes he inherited from both his natural parents. Ahenobarbus had been a notably brutal and venal man who had been lucky to survive the reign of Tiberius, and Agrippina would prove to have come from a similar mould and be a woman who took parental ambition to a remarkable extreme.

In order to prevent Claudius’s natural son Germanicus from inheriting the imperial throne she murdered Claudius (by way of poisoned mushrooms) before Germanicus came of age. Nero therefore became emperor at the age of 16, on 13th October 54 AD.

The start of his reign

Agrippina proved to be the power behind the throne during Nero’s early years, especially as Nero showed no enthusiasm for the job. Germanicus soon suffered the fate of his father (but minus the mushrooms), thus ensuring that there was no rival waiting in the wings.

With Agrippina pulling the strings, and the business of government being in the safe hands of people such as the philosopher Seneca, who had been Nero’s tutor, the first few years of Nero’s reign passed with nothing much to worry about. The emperor was thus able to indulge himself in the activities that most interested him, such as poetry and acting.

Although Nero was quite content to let the business of ruling the empire carry on without him, he was far less liberal when it came to his private life. His mother had, before he became emperor, engineered his marriage to Claudius’s daughter Octavia, but Nero did not find her to be to his taste as a wife. He was far more excited by the beautiful and vivacious Poppaea Sabina. A strange love triangle emerged between Nero, Poppaea and one of Nero’s dissolute friends, Otho, who would have a brief reign as emperor in due course. One possibility is that Otho was already married to Poppaea but was persuaded to “lend” her to Nero until such time as Nero was able to divorce Octavia.

Nero was now in the hands of two powerful women. Poppaea wanted to be empress but Agrippina was determined that he should stay married to Octavia, who could be controlled in ways that Poppaea could not. Nero also knew what he wanted, and the only solution he could see was to murder his mother.

In 59 AD, Nero staged a boating “accident” that he hoped would kill Agrippina, but the plot failed when she was able to swim to shore. When Nero heard of this he sent a detachment of sailors to finish the job in a more traditional way.

With his mother out of the way Nero now emerged in his true colours and things went rapidly downhill. Octavia was not only divorced but accused of treason and banished to an island. She would later be executed on Nero’s orders. Twelve days after the divorce Nero married Poppaea, who was already pregnant with Nero’s child.

Nero also dismissed his wise counsellors and admitted a wholly unworthy replacement, Tigellinus, to his inner circle. This man had no qualifications for the post, being a supplier of chariot horses, but Nero approved of his advice that the Emperor should indulge in pleasurable activities. These included giving lengthy performances of his indifferent poetry in front of audiences that were required to applaud with enthusiasm or face execution.

Meanwhile there was an empire to run. The first major problem during Nero’s reign was the revolt of Boudicca in Britain in 60 AD. The warrior queen had managed to rouse her Iceni tribe to rebel against Roman rule by telling them stories about the decadence of Rome and its effeminate emperor. The rebellion was vicious and highly dangerous, from a Roman viewpoint, with the cities of Camulodunum, Londonium and Verulamium being attacked and thousands of people massacred.

The response was equally severe. The Romans had a highly effective general in Suetonius Paulinus and the rebellion was crushed with great ferocity, ending with the suicide of Boudicca.

In the East, Nero depended on the diplomatic skills of General Domitius Corbulo to reach a compromise solution with Parthia over the status of Armenia.

Worse problems arose in Judaea in May 66 AD when the Roman procurator Florus made a bad situation worse by ordering his soldiers to seize silver from the Temple treasury at Jerusalem. The revolt this occasioned would lead to the loss of thousands of lives, both Jewish and Roman, and would culminate in the sack of Jerusalem in 70 AD, after Nero’s reign was over.