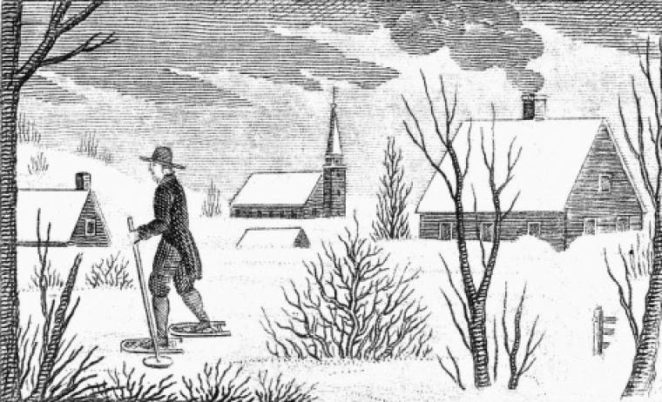 Life wasn’t easy in colonial America but things got even more difficult from 27 Feb through 07 Mar of 1717. During that period New York and New England were pounded by one huge snowstorm after another. Depending on the area as much as five feet of snow fell. As a meteorological disaster it ranks up there with the Blizzard of 1888.

As winters go, the winter of 1716-1717 was unpleasant at best. It was not particularly cold but it was snowy. By the end of December 1716 five feet of snow had accumulated with drifts of twenty-five feet. New Englanders were overwhelmed by the weather.

Sources differ over when the blizzard began. Some sources say 27 Feb, others 01 Mar. We do know that a nor’easter hit the area on 27 Feb dropping snow on some areas and sleet and rain on others. Then on 01 Mar, 04 Mar and 07 Mar, huge snowstorms blanketed the area. Accounts say that the Native American elders said they didn’t remember a snowstorm that severe in their lifetimes.

Boston received 40 inches of snow; north of there they got 60 inches. There was so much snow in Hampton, Massachusetts that people could only exit their houses through the second floor windows. Many single-story homes were entirely buried. You could not even see their chimneys. Many people could not get to their stores of firewood and had to resort to burning their furniture to survive.

Of course the roads were impassible for quite some time. Livestock either starved or froze to death. Others were attacked and killed by wolves who came to the settlements from nearby forests. Some deer were able to survive by feeding on the leaves at the tops of the few trees not entirely covered.