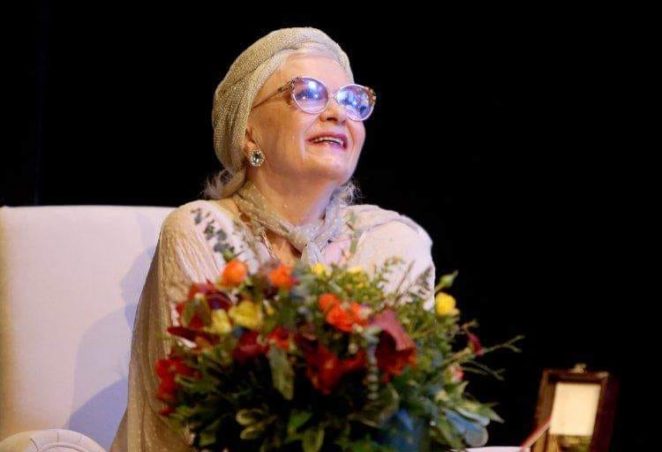 Presentation of the book about a woman who is in itself a work of art spontaneously turned into a kind of show. I’m sure that everyone present remembered every sentence that during those two hours uttered large, the largest Milena. These are the amazing performances without acting, rehearsals and reprisal, unannounced and – so rare. Master-class. Lessons of history. From evoking memories of the first film steps and marriage with Dragan in between filming, the memory of prize at Cannes and collaboration with Brad Pitt ( “Yes, it was, came Bred, I played his mother …”), to roars of laughter which caused a duet with godfather Seka Sablić, who accompany her on stage.

Homage in which each Milenina sentence was awarded a standing ovation and accompanied by laughter and tears of joy that is here with us, which in spite of all time and has not lost spirit, as told anecdotes very same passion and voice that we remember from famous movies … “Gordana Diklić called the hotel”, “No way, I’m going alone!”, “Mikaaajlo, wait for me!” “What ?! meeen Faaa “… Fireworks of emotions on all sides.

A woman who is our national and cultural treasures. An extraordinary artist whose work for the cinema itself. Which all night, selflessly, without a trace of fatigue hang out with everyone. I signed my book, left dedication … In the manner of the world’s biggest star, the first and the last giant, which it certainly is, but never themselves not as experienced. Yes, it was the two hours of history. I will remember them while I’m alive. “It was as if the people had taken the wind …” she sang it once Arsen. Here, this sad day shall košava. As it relates to eternal, heavenly theater,