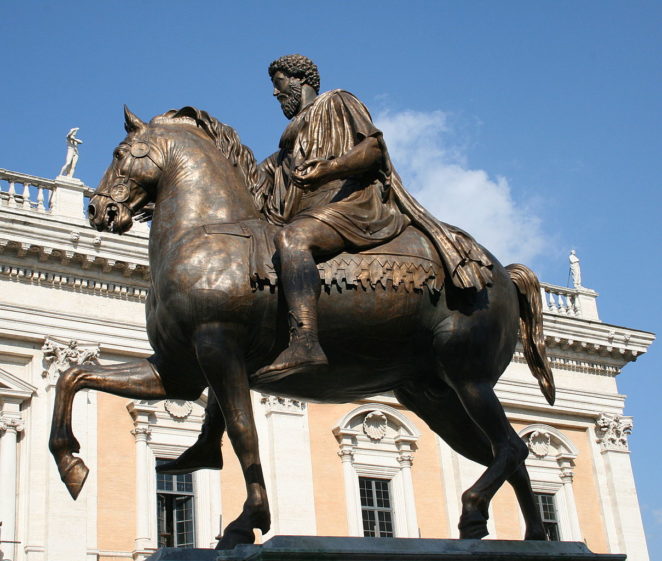 Marcus Aurelius was the last of the “five good Emperors” who ruled the Roman Empire between 96 and 180 in the period that Edward Gibbon (in his “Decline and Fall of the Roman Empire”) described as that “during which the human race was most happy and prosperous”. The other four “good” Emperors were Nerva, Trajan, Hadrian and Antoninus Pius.

Marcus Aurelius was born in Rome on 26th April 121. In 138 Emperor Hadrian adopted Aurelius Antoninus as his son and heir on condition that he in turn adopted Marcus Annius Verus and Lucius Verus (who were related but not as natural brothers) as his joint successors. As well as being favoured by Hadrian, Marcus was betrothed to Faustina, the daughter of Antoninus, who was also to become his sister by adoption. Their marriage was to last for thirty years and produce thirteen children.

When Antoninus died in 161, Marcus (who took the name Aurelius) and Lucius Verus became joint Emperors, although it was clear that Marcus was the senior partner. For one thing, Lucius Verus was nine years younger than Marcus and for another he was more interested in enjoying himself at the theatre and in chariot racing than in undertaking the business of government.

Trouble on the frontiers of the Empire

Although the long reign of Antoninus (23 years) had been largely peaceful, trouble was brewing on the Empire’s northern and eastern frontiers. Verus led an army eastwards to counter the advance of the Parthians who were threatening Rome’s trade routes to India, although Verus himself had no experience of military command.

In 163 the Romans, led by general Avidius Cassius while Verus adopted a backroom role, drove the Parthians back and advanced as far as Medea (in modern Iran). Rome’s borders were strengthened by the appointment of client rulers in the frontier regions who would be loyal to the Empire after the armies withdrew, which they did in 166. Verus was awarded a triumph in Rome, but he died of a stroke in 169 (aged only 39) which left Marcus Aurelius as sole Emperor.

Dependence on the gods

The withdrawing Roman armies brought with them a devastating plague, probably smallpox, which spread throughout the Empire as the legions returned to their usual stations. It has been estimated that as many as six or seven million people died, representing some 10% of the entire population.

Marcus consulted various oracles, thought to have a direct link to the gods, for advice on what to do about the plague, and he issued Empire-wide edicts that prescribed the rites to be followed, although how effective these were is not known.

He also relied on oracles to determine his policy regarding the threat from north of the Danube posed by various tribes. One such oracle prescribed the throwing of two lions into the Danube as an offering to the river gods to prevent the barbarians from crossing. This was a complete failure, in that not only did the lions promptly swim to safety but the tribes crossed the river and penetrated as far as northern Italy before they could be repulsed.

Marcus found himself under siege in the town of Aquileia and again called on the gods for help. This time he had better luck when a lightning strike destroyed a siege engine. Later, a violent thunderstorm caused confusion among the barbarians and helped a Roman legion to force them back. Various claims were made as to whose god was responsible for this, as some Christian writers have suggested that it was the prayers of the Christian members of the legion, rather than those of the pagan Emperor, that did the trick.

In 175 Marcus Aurelius declared that his son Commodus, then aged 14, was to have the rank of Augustus and therefore share the imperial power. The generals did not take well to this move and Avidius Cassius rebelled to the extent of declaring himself Emperor. Having concluded a peace with the northern tribes, Marcus set off eastwards to deal with the rebellion but Cassius was assassinated by his own troops before Marcus arrived.

Marcus Aurelius had the good sense to deal with the aftermath of the rebellion by conciliation rather than by exacting revenge on actual or imagined plotters. None of Cassius’s accomplices was put to death and Marcus ordered that all Cassius’s papers, which might have implicated people in the plot, be burned without being read.

Trouble continued on the northern borders, and after a short time in Rome (176-178) Marcus had once more to turn his attention in that direction. His forces were largely victorious and he was able to repeat the policy adopted on the eastern frontier of setting up client buffer states. However, he was still campaigning when he suddenly fell ill and died on 17th March 180 at Sirmium in Pannonia (modern Serbia).

Marcus Aurelius is renowned for having been a highly intelligent and cultured man who is often referred to as “the philosopher Emperor”. This reputation is largely due to the twelve books, written in Greek, that have been entitled his “Meditations”. These comprise jottings, made on campaign, that express thoughts and reflections on the meaning of life and the transient nature of all things, including power. They are consonant with the philosophy of the Greek Stoics and have been much admired by later thinkers, who have come to regard Marcus Aurelius as a “pagan theologian”.

His writings were to have an influence on later Christian leaders and theologians, although ironically he was not averse to persecuting Christians. The martyrdoms of St Polycarp and St Irenaeus took place during his reign.

Marcus Aurelius’s worst error of judgment had nothing to do with throwing lions into rivers but everything to do with imagining that his son Commodus would be a worthy successor. Far from being “a chip off the old block”, Commodus would prove to be a disaster as Emperor and the reason why Gibbon believed that the death of Marcus Aurelius marked the beginning of the Empire’s decline and fall.