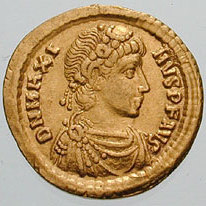 Magnus Maximus was a usurper who conquered part of the western Roman Empire and became recognized as emperor, albeit for a relatively short time.

He was probably born in the year 335 in what is now north-west Spain. He joined the army and served under his uncle, General Flavius Theodosius, whose son would later become Emperor Theodosius I.

Magnus rose to the status of General and served in Britannia, where he was active in putting down local uprisings.

Britannia was part of the western empire ruled by Emperor Gratian from November 375, but his rule was not always accepted with complete loyalty. When the army rebelled in 383 they declared Magnus Maximus (which translates as “Great the Greatest”) to be their emperor. He accepted their nomination and was soon having coins minted that showed winged Victory hovering over the two emperors – the western one being Magnus and the eastern being Theodosius.

There were in fact four men (or, to be more accurate, three men and a boy) who claimed the title of emperor at this juncture. The one who most concerned Magnus was Gratian, who was the “official” western emperor with jurisdiction over Gaul and Britannia. Magnus therefore crossed the English Channel, accompanied by a large number of soldiers whose duties had previously been to protect Roman Britain from troublesome local tribes.

Many of Gratian’s troops promptly deserted him and he fled to Lyons, where he was murdered on 25th August.

Magnus Maximus was now in effective control of much of the western empire, namely Britannia, Gaul and Spain, and he was able to retain that position for the next five years. What he wanted most was recognition of his status by his fellow emperors, namely Theodosius and Valentinian II (Gratian’s half-brother), who was the nominal ruler of Italy, Africa and the western Balkans, despite being only 12 years old at the time of Gratian’s death.

Theodosius was willing to recognize Magnus as a co-emperor, but Valentinian – or rather, his adviser Bishop Ambrose – was not. Magnus had no choice but to resort to force and he therefore invaded north Italy (Valentinian was based at Milan) in 386. Valentinian fled eastwards, accompanied by his mother and sister, and sought refuge with Theodosius at Constantinople.

Theodosius was therefore given the choice of either supporting his cousin Magnus or the half-brother of the man who had nominated him for the post of eastern emperor. He was also offered Valentinian’s extremely attractive sister as his wife, and this was an offer he could not refuse.

Theodosius therefore marched against Magnus Maximus, who was completely unprepared for this turn of events. Magnus was captured at Aquileia (near modern-day Trieste) and executed on 27th August 388, a fate that was also suffered by his family and close associates.

One important consequence of the short reign of Magnus Maximus was that the troops he took with him to Gaul did not return to Britannia. There is some evidence that many of them settled in what is now Brittany. The result of this was that Britannia was now deprived of much of its defence force and was therefore subject to incursion by tribes that included Picts from Scotland, Scots from Ireland and Saxons from northern Europe. Local chiefs who had formerly relied on Roman protection could no longer do so. The beginning of the end of Roman Britain can therefore be dated from around this time.