It is quite possible that Marcus Opellius Macrinus never wanted to be Emperor of Rome. There is little doubt that he was far from suited for the role, having neither the customary background nor the required training.

Very little is known about his origins, although it appears that he was born in Mauretania, North Africa, in 165 or thereabouts. He joined the army and rose to become a prefect in the Praetorian Guard, the main task of which was to protect the person of the emperor. 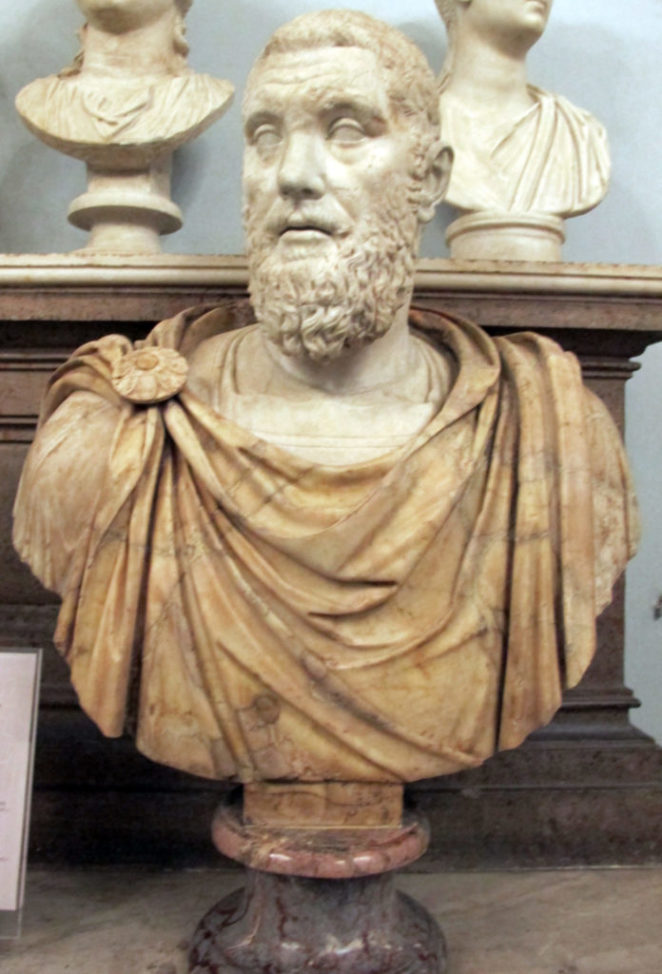 From the year 211 this was Caracalla, who was much hated for his tyrannical behaviour and was the subject of many plots against his life from people who feared that they might be on the emperor’s list of potential victims.

One way for people with personal grudges to get rid of their enemies was to implicate them in imagined plots and make sure that the emperor got to hear about it. It could well be that Macrinus was in this position and was framed by a friend of Caracalla named Flavius Maternianus. It appears that Maternianus wrote a letter to Caracalla in which he suggested that Macrinus was dangerous and should be eliminated, but the letter was intercepted and shown to Macrinus.

Macrinus therefore had little choice but to take direct action and arrange for Caracalla to be killed. The opportunity presented itself when the emperor paid a visit to a shrine in southern Turkey and dismounted from his horse to relief himself. The assassin paid by Macrinus promptly struck Caracalla down when his back was turned and his guards were respecting his privacy by looking the other way.

Is the story true? Was Caracalla murdered by Macrinus? It is possible, but the whole truth will probably never be known.The man who struck the blow was never able to implicate anyone because he was immediately killed by the other soldiers.

It may well be that Macrinus had no plan to become emperor in Caracalla’s place, because he had to be persuaded by other army members to accept the role. This reluctance might, however, have been a ploy to deflect suspicion for the murder from himself. On the other hand, with a large Parthian army heading their way it is hardly surprising that nobody was all that keen to take on the task of leading Rome’s response.

Once he had accepted the post of emperor, Macrinus took the line that buying off the Parthians was preferable to fighting them, and this he did at great expense. He then took the same line with the Armenians and the Dacians, who thought that they could take advantage of Rome’s apparent weakness and indecision and cause trouble.

Macrinus then made two bad mistakes. One was to rescind the generous pay rise that Caracalla had given to members of the army. Caracalla had nearly bankrupted the Empire by engaging in spectacular building projects, and Macrinus presumably thought that he could see a quick way of repairing the damage. However, cutting the pay of the people who fight your wars and protect your person is rarely a good move.

Caracalla had tried to curry favour with the ordinary people of Rome, and Macrinus made his second big mistake when he decided not to return to Rome when news reached him that much distress had been caused in the city by a disastrous fire followed by a flood. The people needed support from their emperor, and they did not get it from Macrinus.

However, Macrinus’s fate lay in the hands of a group of women who were about to take a major role in the government of the Roman Empire.

Macrinus had been appointed by the army, but he had no claim to the imperial throne by virtue of family links to his predecessors in the role. Caracalla had been the son of Septimius Severus, whose widow was still alive, although she died not long after Macrinus became emperor. Her sister, Julia Maesa, had two daughters, each of whom had a son who was therefore a member of the Severan clan and, in the view of their mothers and grandmother, far better qualified to be emperor despite their very young ages.

The older of these candidates, 14-year-old Varius Avitus Bassianus, bore a passing resemblance to Caracalla and the story was put about that he was actually Caracalla’s illegitimate son, although this was quite false. It was not difficult to get a sizable number of soldiers interested in the notion of restoring the Severan dynasty through this young man, especially if he behaved like his supposed late father and reinstated the pay rise that Macrinus had cut.

Avitus was declared emperor by a legion in Syria and Macrinus had no choice but to call on the troops still loyal to him to crush this threat.

The end of Macrinus

When battle was joined it looked at first as though Macrinus would prevail. However, the Severan women were not without courage of their own and Julia Maesa and her daughter Julia Soaemias encouraged their troops to fight on and actually leapt from their chariots to do so.

Macrinus turned tail and fled. He was eventually captured and executed, along with his own teenage son. Their heads were struck off and stuck on pikes to show beyond all doubt that the immediate future of the Roman Empire lay with the Severan clan. This was in June 218; Macrinus had been emperor for only one year and two months.

With the new emperor aged only 14, the future was every bit as uncertain as it had been before.