source of picture above: edu.glogster.com/glog/spartacus/1oar2hwo4st

After his victory over Cossinius, Spartacus and his army had already won a few battles and their moral must have been euphoric. But the reports to the Roman Senate certainly were not nice to read. Slowly the thruth started infiltrating even the most unconcerned Roman aristocrats: they were confronting a dangerous enemy that had a large regiment of human resources (140,000 at last count). In every Roman farms, there were slaves that could become a potential rebel. After Cossinius’ defeat, the renown of Spartacus grew. The message was very clear: the Romans were not invincible.

Spartacus’ army passed the winter of 73 BC camped in the south of Italy all the while strenghtening in numbers, arms and moral. In the spring, he started leading them up North; his audacious plan was to cross the whole of Italy, cross the Alps and escape in Gaul (actual France) which was at the time not controlled that much by the Romans. According to Plutarch again (translated by me from French to English): ” Without being dazzled by his success, Spartacus took precautionary measures and without flattering himself on his triumphs over the Roman power, he started to lead his army towards the Alps persuaded that it was the best option to cross them and then eventually each one of his recruits could go back to his country of origin , some in Gaul and others in Thrace. ” (source: https.://marxiste.qc.ca/théorie/histoire/776-spartacus-un-véritable-représentnant-du-prolétariat-antique.html).

The Roman senate, very worried, sent another two legions under the command of the consuls Gellius Publicola and Gnaeus Cornelius Lentulus Clodianus. Spartacus was soon going to face his biggest hurdle: an army of two legions thus 10,000 men. The Romans did indeed win a victorious battle by defeating the Gallic contingent of Spartacus that was under Crixus. The rebels were at that time slowly dividing between themselves. In fact it was not an easy task to maintain the unity and discipline in an army made up of slaves originating from different countries, talking in several different tongues and dialects and believing in different gods. Crixus and the Gallics refused to walk under the command of Spartacus because they wanted to stay in Italy to be able to just continue looting. Crixus’ defection with the ranks of Spartacus along with 30,000 men was a colossal mistake: Crixus was defeated by Publicola and killed in battle along with 20,000 of the 30,000 men. Then Spartacus took on upon himself to defeat first Lentulus and then Puclicola. This was a terrible blow to the Roman prestige and shook the Roman’s Senate confidence. Their army was not only massacred but Spartacus also captured their ” fasces ” (banners). In Mutina (the new Modena), Spartacus’ army also defeated another legion under the command of Gaius Cassius Longinus.

Then, suddenly, everything changes. Spartacus’ army was at the base of the Alps and could have gone into Gaul where they would have been able to escape but instead they turned back into Italy. The army of Spartacus was also at that time increased by a large number of women, children and elderly that had joined them to escape servitude. They counted for some 10,000 men and women and children. Those people had to be fed and taken care of. And the Romans were no longer overlooking them. When the Senate learned about the latest victory of Spartacus, it turned against the consuls and started to take charge of the conflict themselves. They gave responsibility of this new war to Marcus Licinius Crassus. 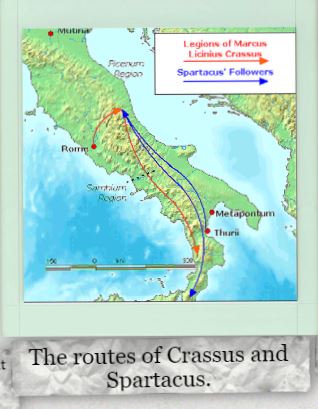 So, when Crassus came upon Picenium, while waiting for Spartacus to come by, he sent his lieutenant Mummius along with two legions to observe the enemy’s mouvements but under strict orders not to attack them. Mummius, too confident in his status, started battling Spartacus’ army and was vanquished. His legions would have been annihilated unless for the intervention of Crassus. A lot of the Romans actually threw their arms down and fled compared to the slaves who stood their ground to the very end but suffered terrible casualties in the order of 12,300 rebels. Crassus then took desperate measure to maintain discipline in the Roman legions.

In 72 BC Spartacus and his army crosses Lucania and settles in the Reggio de Calabre near the Messina strait. He attempted to conclude a pact with Sicilian pirates to help them bring him and his army to Sicily but these left him high and dry. As such Spartacus’ army was trapped. The slaves’ position was getting desperate. At the beginning of 71 BC, eight legions of Crassus assaulted them. The slaves had their backs to the sea. More bad news was coming. The assassination of Quintus Sertorius, who had led the Spain rebellion, meant that the Senate recalled Pompey from that province. Marcus Terentius Varro Lucullus was also recalled from Macedonia. The Roman state which showed such contemps towards the army of slaves, was now concentrating all its forces agains them.

After a little skirmigh, Spartacus had one of his Roman prisonners crucified. This was an affront to the Roman populace because crucifixion was reserved to slaves and not to Roman citizens. Spartacus moved towards the montains of Petelia while being followed and harassed by Quintus, a lieutenant of Crassus. Spartacus suddenly came about and faced them as they fled away from his onslaught. Spartacus’ troops did not want to forgo battle or to obey Spartacus any more and returned back to towards Lucania to attack the Romans full face. This was just what Crassus was hoping for as he had heard that Pompey was approaching. Crassus did not want to face full front Spartacus so he had a wall erected across the entire isthmus in the hope that the slaves would surrender. The wall was some 300 feet long and a width of 15 feet. Spartacus then, during a night of a snowstorm had his army fill the pit along the wall with dirt and branches just so they that one third of his army could cross. With this audacious tactic, he was able to break the ranks of Crassus’ legions and flee towards Brundisium (Brindisi) where the army of Lucullus was disembarking.

Crassus intercepted Spartacus and his army. Knowing full well that he was outdone and that more Roman reinforcements were coming, Spartacus, nonetheless led his last superhuman battle to his own death. Then Crassus had 6,000 slaves crucified along the Via Appia way between Capua and Rome over some 200 kilometers. The rest of Spartacus’ army was defeated by Pompey near the river Silarus in Lucania and Pompey claimed that he had finally quelled the rebellion and the war. Such was the end of one of the greatest slave rebellion of all times but Spartacus’ legend lived on and still does to this day. 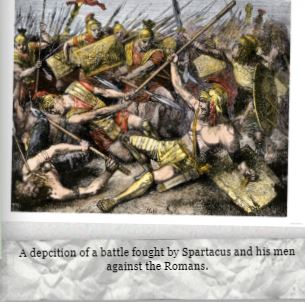