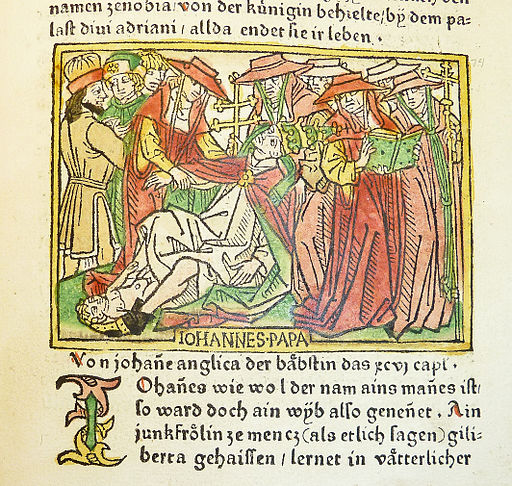 Was there ever a female pope? Many people used to believe that there had been one, and no doubt there are still some today who prefer to accept ancient legends to modern evidence – or the lack of it. 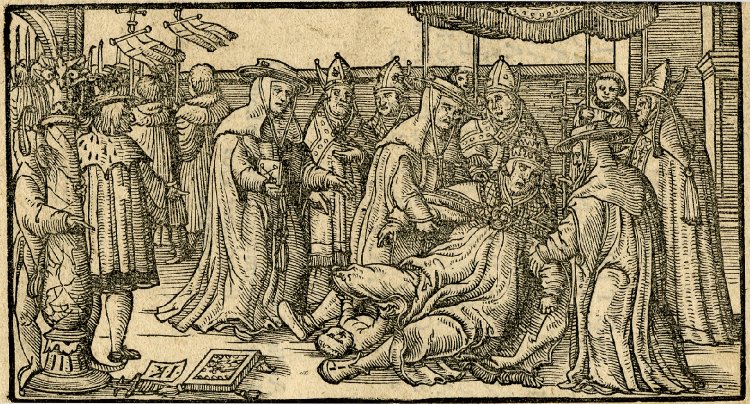 The story of Pope Joan

A monk called Martin wrote in 1265 about a pope called John who was elected in the year 855 and died in 857. However, this apparently male pope turned out to be female when she unexpectedly gave birth when riding through the streets of Rome near the Colosseum. Thus was born the legend of Pope Joan.

Martin may have got this idea from earlier writers, although mentions in sources apparently written before Martin’s time have only survived in manuscripts that were copied later, and are therefore suspect for that reason. The legend is recounted in plenty of other mediaeval sources, but nearly all of them are clearly glosses on Martin’s work and some of them add extra details that are almost certainly inventions by those later writers.

There is one other source that recounts the legend somewhat differently, this having been written by another 13th century monk, namely Jean de Mailly. He talks about the supposed childbirth being followed immediately by Joan’s stoning to death by the shocked populace. The main difference in Jean’s account is that he places it in the early 12th century, although this seems perverse given that the sequence of popes during that period is well established in other sources and there is no gap into which “Pope Joan” could fall.

How the legend could have arisen

What seems to have happened is that an “old wives’ tale” started the rounds during a poorly documented period of Roman history, possibly occasioned by there being a pope who acted in a somewhat effeminate manner. As we all know, stories grow in the telling, especially when somebody writes it down and it gains the status of being on paper “in black and white”.

To add to the confusion, two customs evolved that seemed to confirm the truth of the legend. One was that popes refused to travel along the road in which Joan was supposed to have given birth. This was on the direct route that newly elected popes used to gain access to the church of St John Lateran which is the cathedral church of the city of Rome and where popes are traditionally enthroned as “Bishop of Rome”. A statue of Joan (also called Agnes in some sources) and her son stood at the spot until the late 15th century.

The other custom, which is even stranger, was that newly elected popes had to be physically examined to ensure that they were actually men! This was done during the ceremony in the Lateran when the pope would sit or recline on a special seat that had a hole underneath through which a cardinal would insert a hand to feel the pope’s testicles, afterwards declaring (in Latin) “He has testicles” to which all present would respond “God be praised!”

This idea seems so extraordinary, not to mention revolting, that it is hard to believe. However, two “poping chairs”, made of marble, are known to have existed and one may indeed still do so, although kept well away from public view in the depths of the Vatican. It certainly seems probable that these chairs were used for papal examination for about 400 years, and belief in the legend of Pope Joan seems to be a likely explanation for that use.

However, modern scholarship does seem to have scotched the idea that Pope Joan ever existed. This is partly because of the unlikelihood of the events having taken place as described – could a woman in such a prominent public office really have concealed her sex for a matter of years, not to mention a pregnancy carried to full term? However, the most convincing evidence comes from the fact that the original dating for Joan’s “reign” was impossible, given that coins from the period make it clear that there was no gap between the preceding and succeeding popes into which Pope Joan would fit.