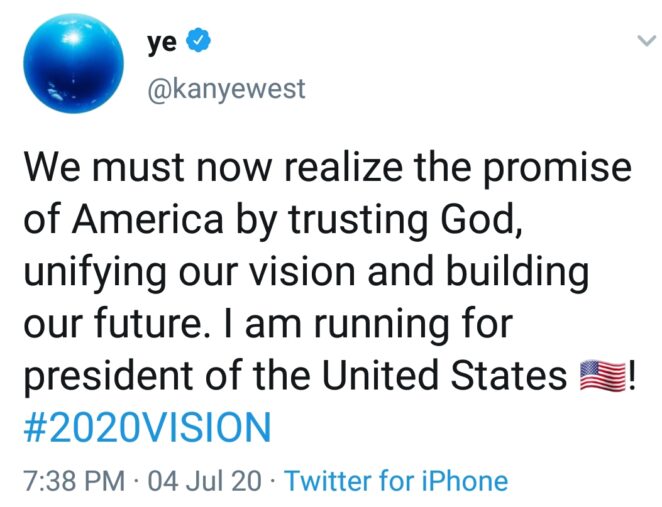 There is not anything that would convince me to honor Kanye West with my vote for president of the United States, even though I would like to hear some of his plans. I just cannot get the image out of my head of Kanye wearing a red “Make America Great Again” hat stating that it makes him feel like Superman. And who cannot forget his breakdown on stage in Sacramento, California as part of his Saint Pablo tour.

It just baffles me that some are literally thinking that Kanye will siphon black votes from Joe Biden allowing president Trump to win a second term. He may get some votes from those that are into his music, but certainly not a vote from a seasoned voter or one who is aware of his past shenanigans.

In my honest opinion voting for Kanye is just a waste of a vote and a waste of time in the process because do you really think that he can handle the pressure and the criticisms of being president of the United States? Would you really want to put America through any more adversity or uncertainty it has already faced?

I do love Kanye’s music albums The College Dropout, Late Registration, and Graduation, but it will take more than my admiration of his music to get my vote. And that is coming from an African American voter, and a resident of Chicago Illinois.