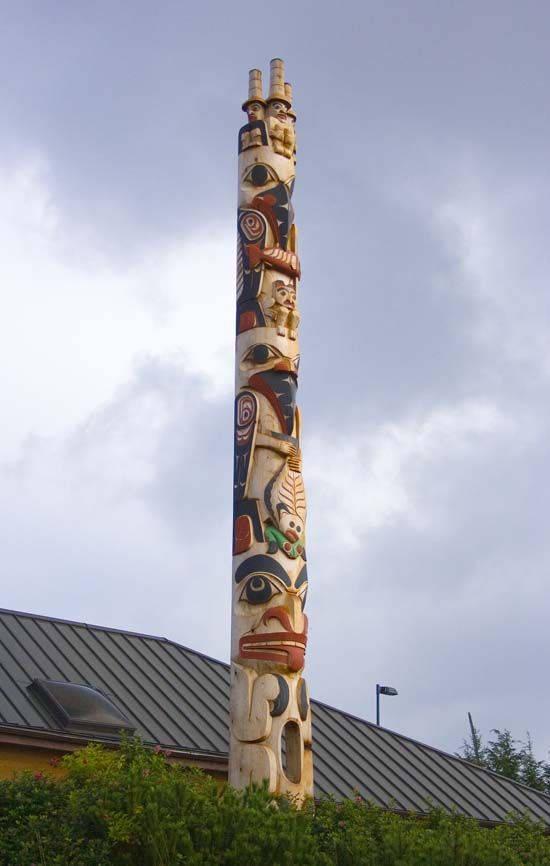 British Columbia is the last western Canadian province. One of the six “First Nations” cultural region is the North West of British Columbia. There are several “First Nations” established and still living there such as the “Nuu-chah-nulth” (who live on the west coast of Vancouver Island), the “Haislas”, the “Heiltsuks” (who mostly live on the north-east of Vancouver island), the Oweekeno (river inlet) the “Nisga’a” and the “Gitksans or Gitxsan” (occupying the territory along the rivers Nass and Skeena) the “Kwakwaka’awkws, the “Tlingits” (occupying the territory of the point of the North West of British Columbia and the south-west of Yukon) and finally the Salish of the coast.

The “Haidas”, another one of the many “First Nations” of British Columbia, live on Haida Gwaii (formerly known as the Queen Charlotte islands), an archipelago off the north shores of British Columbia. The term “Haida Gwaii” means the “islands of the people”. There are about 2,500 “Haidas” living on Haida Gwaii and another 2,000 elsewhere in British Columbia as of 2015. The “Haida” “First Nation” has its very own language which no other Canadian “First Nations” speaks. They call their very own language “Xaayda Kil” although it is also called “skittagetan” which has two dialects: the “masset” (xaad kil) spoken in the North of the “Haida Gwaii” and in some regions of the south-east of Alaska and the “skidegate” (xaaydaa kil) which is spoken in the south. It is to be noted that in these two dialects, there is only a grand total of only nine “”Haida” natives of the whole “Haida First Nations” which can still speak these dialects and only thirteen others who understand and talk a little bit in these dialects. There is some effort from today’s “Haida” councils of the band of Masset and Skidegate to offer linguistic programs to 50 other “Haida” natives.

The “Haidas” as well as all British Columbia “First Nations” lived off the land and ocean. The land provided them with natural resources such as red cedar trees, bulbs, wapato (Indian potato), greens, seeds and berries and animals such as the mountain goat and sheep, deer, moose, fox, mink, beaver, bear and elk. But the ocean and rivers made of the “Haidas” a seafaring people who caught salmon, halibut, eulachon (candlefish), herring, shellfish along with sea animals such as seals, sea otters and whales. In fact, the “Haida” is recognized for its canoe capability and construction. Some of these canoes could carry up to 60 warriors or fisherman and were ocean-faring canoes and created from a single red cedar tree. The canoe had ornate bow and stern pieces which were carved and added separately and displayed beautiful paintings. The paddles used to drive these canoes were slender and long and also decorated with paintings. 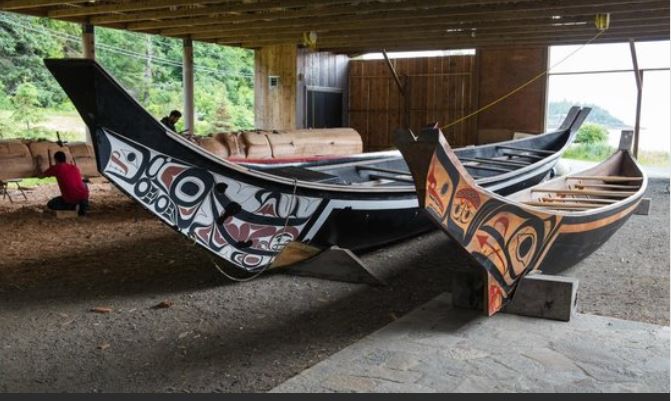 Traditionally every “Haida” villages formed an independent political unit and also every family of the village also considered an independent political entity, However all the “Haidas” belonged to two social groups (also called moieties) called “Raven” and “Eagle”. The “Raven” group was subdivided into 22 lineages or families and the Eagle moiety into 23. The “Haidas” always married a member of the opposite group. The belonging to the group was matrilineal. Every group member pronounced publicly their belonging to the group by displaying family crests which they inherited. These were sculpted on totem poles in front of their houses, sculpted or painted on their canoe, on cedar chests, masks etc.

The “Haida” lived in longhouses or plank houses built from red cedar trees. They were built over a pit and measured 40 to 50 square feet. They did not have windows but were lined with roof slots to let fresh air in and smoke from cooking fires out. Many of these plank houses were adorned with totem poles and paintings which illustrated the dwellers’ social group, history and mythology. 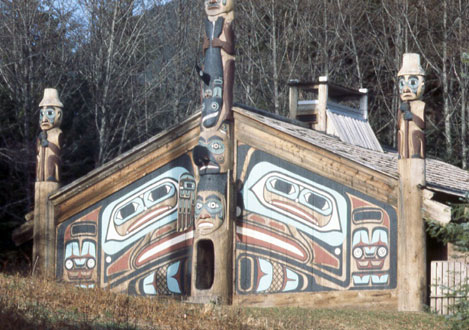 The totems poles were erected by other “First Nations” but the “Haida” totem pole go way beyond all the other tribes’ totem poles. Totem poles produced by the “Haida” coastal “First Nations” are one of the most recognizable symbol of the whole of the Pacific Northwest. They featured several poles types (ranging from 3-18 metres tall or 10 feet to 59 feet and some also reaching 30.48 metres or 100 feet), also either house poles that support the beams of the house and a house frontal post, mortuary poles, memorial or commemorative poles and lastly shame poles which are used in this day and age to protest against the loss of Aboriginal territory or any grievances against the government. Every “Haida” totem pole is different but they all picture some human or animal form and had closely intertwined designs on a shallow relief and were decorated mostly with vivid colors. The animals on the totem poles symbolize the guardian spirit who watches over the family, clan or tribe. The most featured animal at the top of the totem poles is the mythical thunderbird which is the symbol for thunder, lightning and storms and is usually depicted as a large raptor prehistoric type bird sometimes with horns, a long beak and a featherless head. Almost all “First Nations” including the “Haida” held a ceremony at the raising of a totem pole which often was held concurrently with a feast or “potlatch”. The pictured poles below are found in Stanley Park in British Columbia. 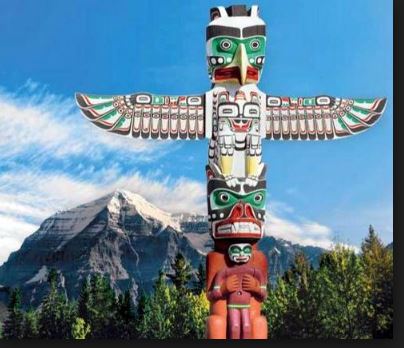 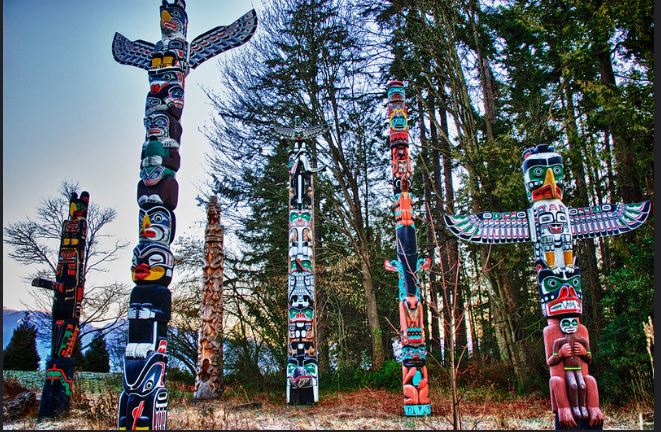 Today’s “Haida” feature several artists who produce a strong yet stylized art form whether it be in carving for either masks or statue like and or painting. You can see some examples of the beautiful artwork below. The first one is a carving by artist Bill Reid. 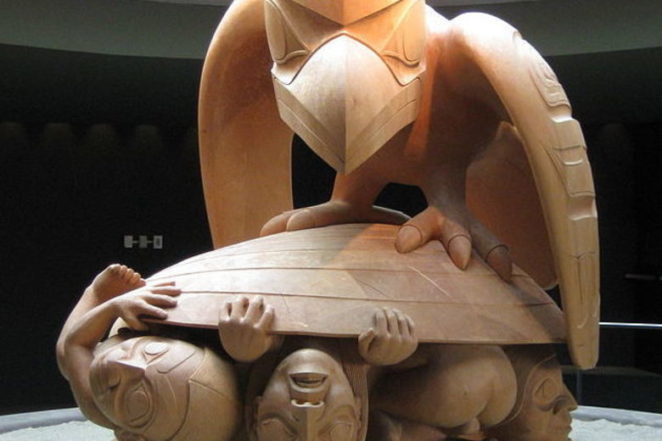 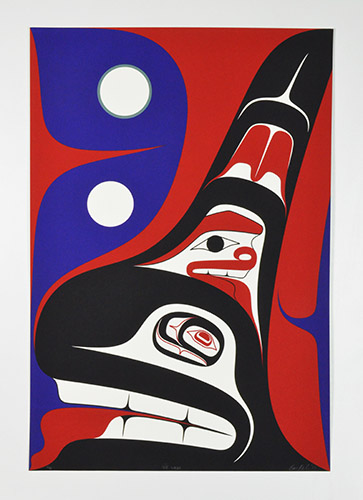 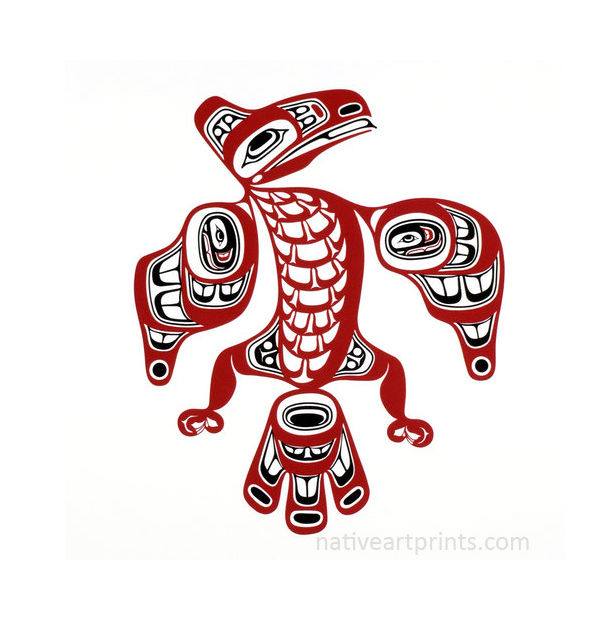 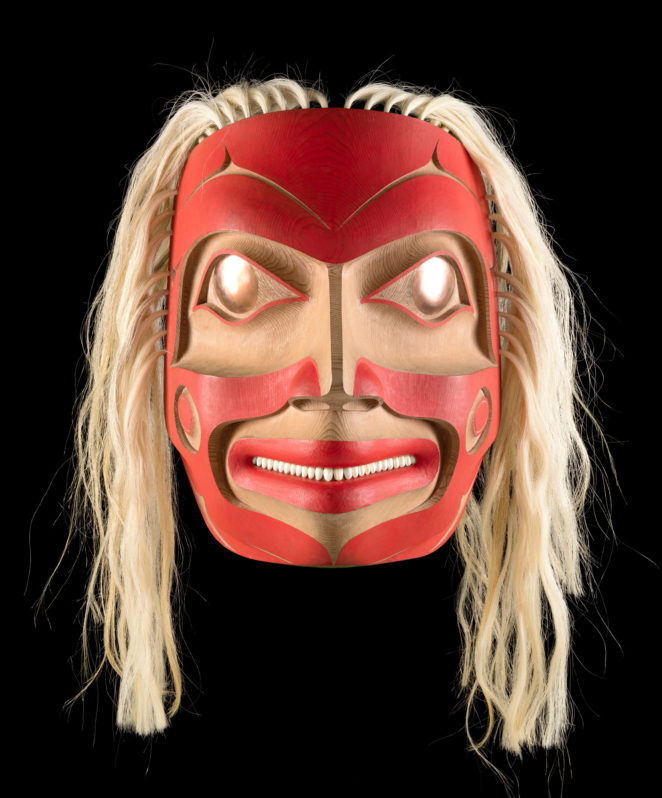 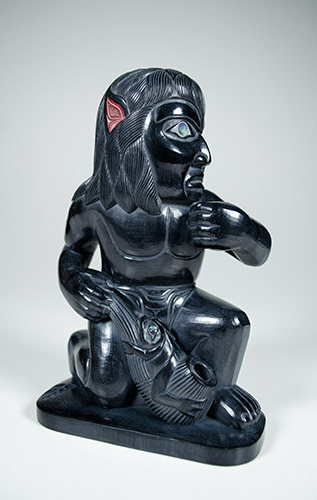 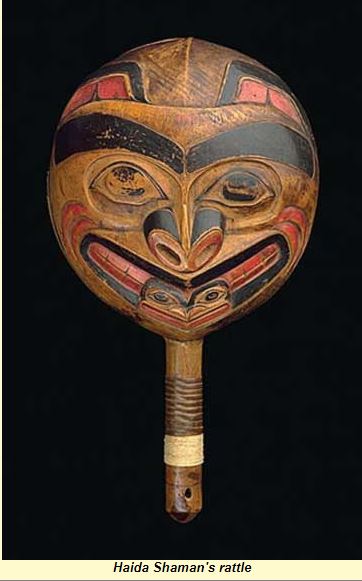