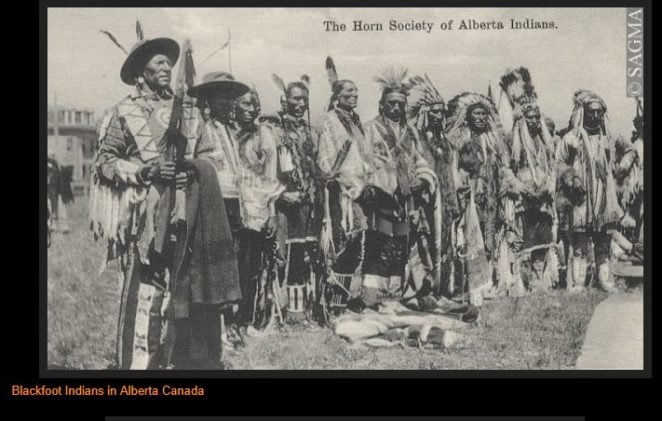 Always following the Canadian provinces from left to right, after Saskatchewan comes the province of Alberta which is also a Prairie province and home to the “Blackfoot Confederacy” First Nations which extends its territory to Montana in the U.S. and Saskatchewan in Canada. As of today, the “Blackfoot Confederacy” (or “Blackfeet” as they are called in the U.S.) numbers some 49,450 souls equally divided between Canada and the Unites-States in three reserves in Canada and one in the U.S. The reserve in the United-States is made of “Pikunis” only according to my research.

The “Pieds Noirs” (French appelation) confederacy is made up of three tribes of “First Nations”: the “Siksikas” (Blackfoot), the “Pikunis” (or “Piikani” or “Apa’tosee” or “Poor Robes”) and the “Kaina” or “Kainah” or Kainai”(the “Blood People”). All these “First Nations” share several socio-economic and cultural characteristics, namely the language which they call “Niitsipussin” (meaning the “true language”) with just a few differences in dialects between the three First Nations. Also, it is to be noted that the Blackfoot practiced and still do inter-tribal marriages and assembled together for important ceremonies.

The “Blackfoot” referred to themselves as the “Niitsitapi” (or “Nitsitapii” or “Nitsi-Topi”) which means in English “the original people” or “the real people”. But according to Hugh Dempsey, this term poses some ambiguity as it is refers to every “First Nations”. Thus he argues that the name “Soyi-tapi” which the “Blackfoot” sometimes use because it literally means “the prairie people” is more appropriate. Personally, I think that this last term also applies much better to the Blackfoot nation as they do live in the Prairies since time immemorial. The term “Blackfoot” is a literal translation of the name “Siksika” which means blackfoot. Their name was given to the whole nation because they were the first ones to encounter Europeans settlers.

According to a legend, the “Blackfoot” nation divided itself in three camps to better defend their territory. Not long after this splitting up, a man from the northern camp visited the south-east camp who had suffered from wild prairie fires. The man asked to see the chief of the south-east camp but everybody he met claimed to be the chief; he then called that nation “Akainai” (the tribe of many chiefs) which was later on modified to “Kainah” (the Blood people). The “Kainai” called the man’s tribe “Siksikas” (“blackfoot) because of the black color of the moccasin of the visitor. This visitor then went to the third camp; there seeing that the women were not tanning the skins anymore and seeing people wearing animals skins still with some of the meat attached to it, he named that tribe “Apikuni” (meaning ugly skin in Blackfoot language) which was later on shortened to “Pikuni”.

“Blackfoot” people were generally nomads, moving from one site to the other and lived mostly from gathering and hunting, especially hunting of bisons of which they followed the herd. In fact, their subsistence revolved around the bison: meat served as food, their bones were used to make tools and utensils and their fur and skin was used to make clothes, bags, tipis coverings etc. The “Blackfoot” had three main methods for hunting bisons. The most ancient one was to use a “piskun” meaning that they used a cliff where they basically surrounded the bisons and forced them near the cliff till they fell in. The most cliff for this type of hunting was the one called “Head-Smashed-In” of which you can see a picture below. It is located in Alberta about 19 km from Fort McLeod and is considered a heritage site today. Their second method was to go close to a small herd of bison and kill the best ones as the other bisons milled around. The third technique consisted of the men who eventually had horses (as these were brought in North America by the Europeans) pursuing the bisons and either killed them with bow and arrows and eventually guns. But one thing I must note here is that the “Blackfoot” nation never killed bisons just for pleasure or their fur. First off, the hunters never killed calves or their mothers. They hunted and killed bisons only for food to start with unlike the Europeans who eventually decimated the bison herds in North America. Also, they considered the bison (“in-niw” in their language) as a sacred animal and dedicated ceremonies to them. They thought that the bisons were a gift that the Sun had made to them and every time they killed an albino bison, they would leave his skin in offering to the Sun. 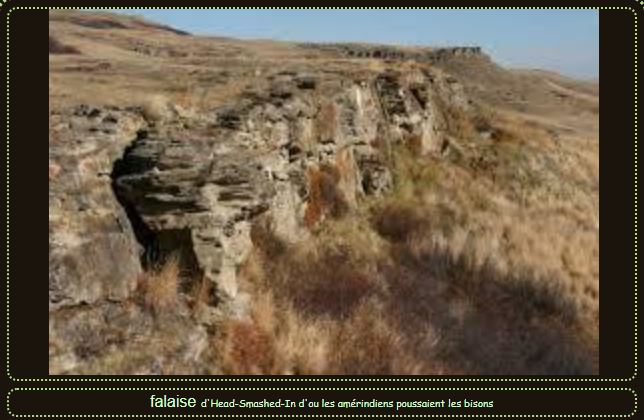 Now today, the “Blackfoot” nation survives by agriculture and also they are trying with the help of the Canadian government to reintroduce the bison and rebuilt the bison herds. Some 80 bisons from the U.S. were brought in the Banff National Park to range. 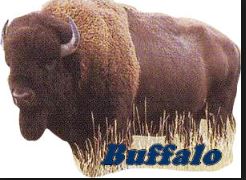 The “Blackfoot” remain renowned for the beauty of their beaded clothing. 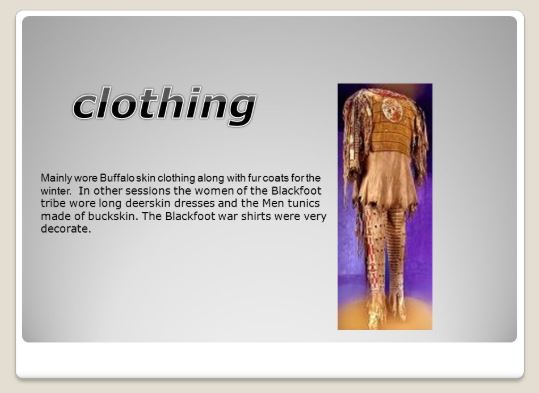 One artist named Adrian Stinson (aka Little Brown Boy Heavy Shield) is a painter, whose work has even found its way to the British Museum in London. He has so far painted three themes which are a series of paintings he did in response to the history of resource extraction done so far on the land of Alberta and its effect it has had on the indigenous population such as himself. The following painting presents a young bison frolicking in the snow while his mother is rolling in it with oil derrick (very small) in the background. Compared to the color explosions of the other artists I presented, this painting is in my view the best one. It is simple yet very elegant. 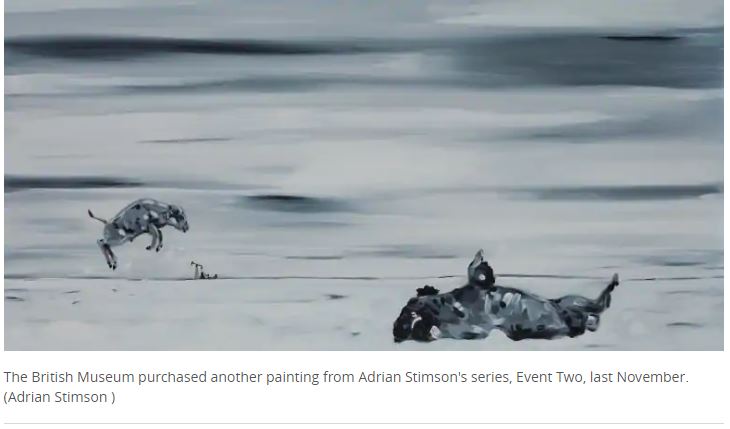