The Innus, which means “a person” or “a human person”, were originally called Montagnais-Naskapis by the Europeans. They belong to the algonquian linguistic family, called Innu Aimun,  which also included, in Quebec, the Abnaquis, the Algonquins, the Malecites, the Micmacs, the Attikameks and the Naskapis. In 2016, there is an estimated 20,000 Innus inhabitants in Quebec alone positioned in 10 bands and also 2,000 Innus in Labrador. But they also constitute the most oriental group out of a vast nation named the Cris First Nations, Of the nine communities of Innus in Quebec, seven of them are located on the North-West Coast of the Saint-Lawrence river (Essipit, Pessamit, Uashat mak Mani-Utenam, Ekuanitshit, Nutashkuan, Unamen Shipu and Pakua Shipu), one is on the side of the Saint-John Lake (Mashteulatsh) and the last one on the border of Labrador (Matimekosh-Lac-John).

Traditional oral stories passed down through the ages report that the occupation of the territories by diverse Innus groups became permanent but was conditioned by diverse confrontations with, notably, Inuits, Micmacs and Iroquois First Nations. Later on, of course the Europeans came into the picture and brought the Innu nation to its knees as it happened with all the First Nations eventually.

During the period of the contact with Europeans, the Innu nation had their own territory (which they called Nitassinan) and included the Saguenay-Saint-John Lake region, the north of the Saint-Lawrence river and the Labrador peninsula. This was a vast territory which the Innus crisscrossed from north to south. They also possessed a very holistic understanding of their territory and used it well.

The Innus were traditionally a nomadic tribe of hunters-gatherers. In the summer they would congregate along Saint-John Lake and the Saint-Lawrence river to celebrate weddings, exchange goods, do some commerce and talk politics. During the autumn, they would divide themselves back into family units and go back to their hunting territories along the interior of the province. They considered themselves as the “Kupaniesh” which are in our language “servants” or “protectors” of the forest where they hunted and trapped fur animals.

The basis of the Innu belief system is that the forest is giver of life. One of the greatest myths of the Innu nation is that animals liberated men in the forest but extracted from them the promise to never divulge the secrets of that forest. They also believed in the Great Spirit, “Tshitshe Manitu”, the great and good spirit. But foremost in their culture, the Innus believed and still do to this day, that spiritual forces inhabit every thing and every living thing whether it be human or animal. For the Innus, every species, including the humans, occupy a special place in the cosmos’ circle. This belief has favored the respect of each of the constituting elements of the universe and ensures its equilibrium.

Innu culture was built and centered on its relation with the animals that it hunted, a relation that was at the same time pragmatic and spiritual. The Innus were outstanding hunters, but their relation with the animals was based on love and respect and not on a violent capture of a simple prey. They estimate and strongly believe that animals possess such a high spiritual power that hunters would not be able to kill unless they offered themselves voluntarily. The Innus also believe that the animals only offer themselves to hunters that respect them and that accomplished the appropriate rituals to dispose of their carcasses and their bones. The caribou was an especially important and revered animal and was even celebrated during a feast called “Mokushan” where singing and dancing and drum beating were performed.

In today’s history, the Innus are still prominently cultural in their daily lives. Innu literature is represented nationally and internationally by the poetess Rita Mestokosho. Innu music is played and defended by several musical groups. The most known Innus musicians are Shauit, Florent Vollant and Claude Mackenzie (of the “Maleotenam” reserve of Norhern Quebec) of the group Kashtin which became popular in the 1990’s. I remember Kashtin well but unfortunately I never bought one of their three albums. But if you are interested in listening to authentic Innu songs, may I suggest this link where you can listen to some of Kashtin’s music.

The Innu art form is sometimes so beautiful that some of their beautifully colored and customed caribou coats are exposed in museums like this one: 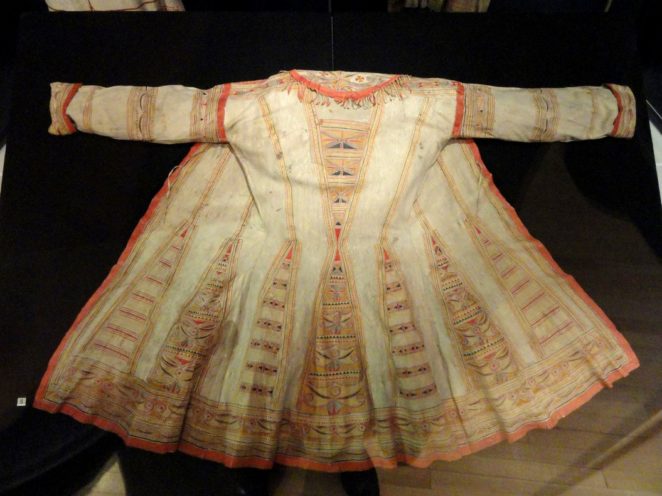 You can see also the beauty of the Innu embroidery skill on the typical Innu cap just like the first picture above the post. There are also several galleries exposing Innu art form but more in the present day use of art techniques like this one: 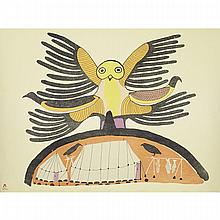