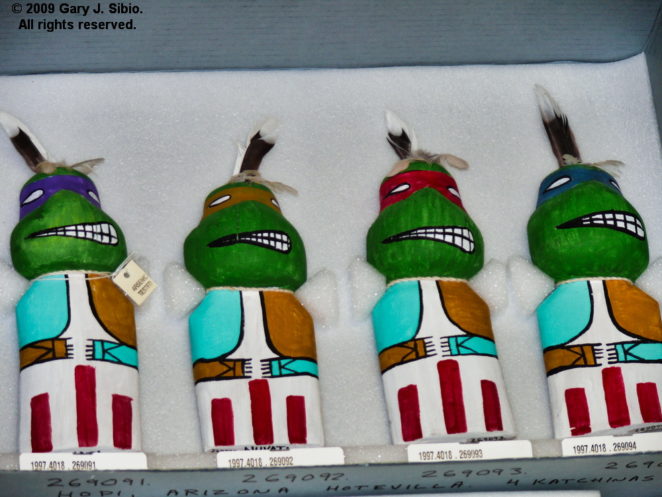 I don’t know what it’s like in other countries but, in the United States, some people are going out of their minds over what is called cultural appropriation. It is especially a topic of discussion around Halloween when people often dress up as a member of another culture. Usually no offense is meant but some people, who have few real problems to worry about, get upset over some college student wearing a serape and a sombrero.

Well I have a surprise for you Mr. & Mrs. Woke. Cultural appropriation goes both ways and normal people couldn’t care less.

Here’s exhibit #1, a set of four Hopi Kachinka dolls using the likeness of Teenage Mutant Ninja Turtles. The dolls are part of the collection at the Field Museum of Natural History. They are not normally on display but were put on display for Members’ Night 2009.

According to the 2010 census there are currently about 20,000 Hopis living on their reservation in Arizona. They have their own culture. They have their own language. What they didn’t invent was the Teenage Mutant Ninja Turtles who are, in fact, the creation of two guys in New Hampshire and first appeared in 1984.

So some Hopi Indian decided to mix their culture – the dolls – with something Americans came up with. No problem. I’m fine with it. In fact, I thought it was rather clever.

So if a sorority girl gets dressed up as a geisha this Halloween, here’s an idea: don’t worry about it. It really doesn’t matter.

The Field Museum of Natural History is located at 1400 South Lake Shore Drive in Chicago, IL

The photo was taken with a Panasonic DMC-FZ50 camera and edited using Luminar 2018. I used the Develop filter to make a slight correction to the white balance and raise the contrast and clarity. Then I added the Accent-AI filter.