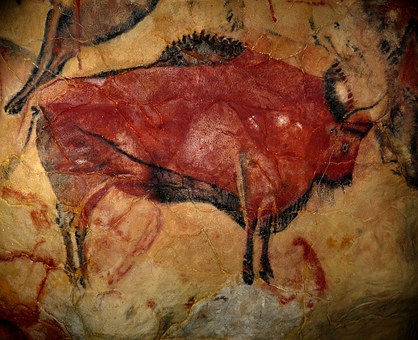 What happened 50,000 years ago? Something strange happened to human culture.

Humans behaved much like their ancestors, until about 50, 000 years ago. At this time, there is a sudden increase in diversity of tools. There is also a sudden flourishing of the arts, with cave paintings, petroglyphs and carvings. There is also an increase in the variety of artifacts, such as eyed needles, oil lamps, and rope. Lifestyles changed as well, with organized settlements, specilized food, and storage pits. (Source, Wikipedia)

So what happened? Some scientists think it was climate change that brought on the sudden changes in human development. Noam Chomsky thinks it may have been a “saltation” of the development of language.

My theory is that it was due to the Precession of the Equinoxes. The cycles repeats every 25, 920 years. So these events happened just about two Precessional cycles ago. This would be 51, 840 years ago. Both of these numbers are canonical numbers.

I think that the Precession brings cultural, evolutionary, and consciousness changes. At specific times during the Precession, interesting things happen. Some sources say the Neanderthals died out 26,000 years ago, one Precessional cycle. A quarter of a cycle ago, civilization started. A half a cycle ago, the first megaliths were built at Gobekli Tepi, and the Ice Age ended. The cycle starts at Leo (a half Precession ago) and the midpoint is at the beginning of Aquarius, which is now.

What will happen at this node in the Precession? Something interesting, I think.

Precession of the equinoxes