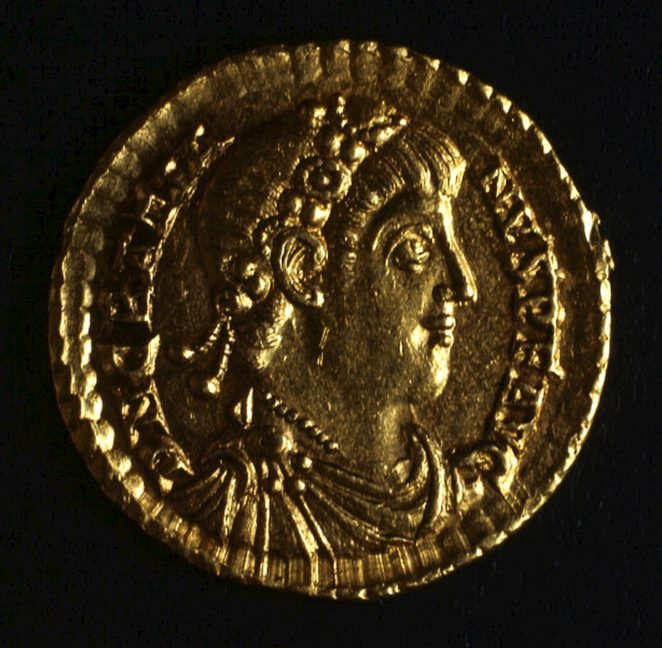 Flavius Gratianus was born on 18th April 359 at Sirmium in Pannonia (a Roman province that covered parts of modern Austria, Hungary, Slovakia and several former Yugoslav republics). His father was Emperor Valentinian I and his mother Marina Severa, who was later divorced by Valentinian, probably in 370.

On his elevation to Emperor, Valentinian had requested that his brother Valens should rule jointly with him, the latter taking control of the eastern part of the Empire while Valentinian ruled in the west. This arrangement was to become a familiar pattern until the eventual collapse of the Western Empire in the 5th century. 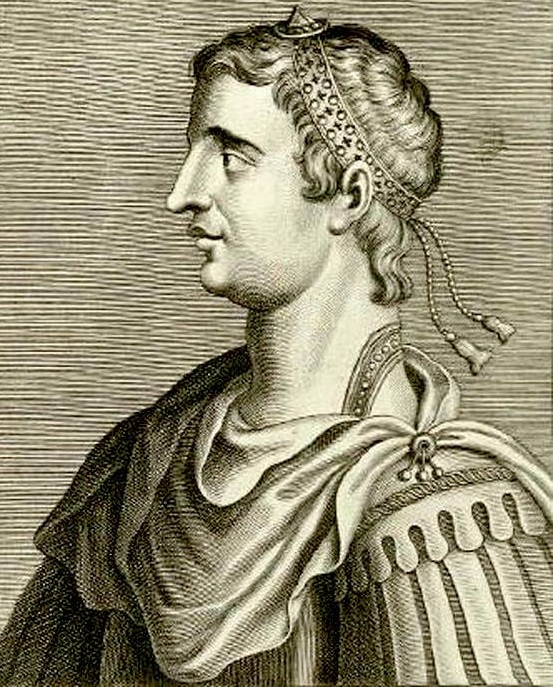 Gratian’s first public office was that of consul in 366. As Gratian was aged seven at the time this was simply an acknowledgment of his high status as the Emperor’s son.

He accompanied his father on campaign in Gaul in 367, and it was on this campaign that Valentinian fell seriously ill and there was concern among his courtiers about who would succeed him if he died. Discussions were held without either Valentinian or his brother being consulted, which many Emperors would have regarded as treasonable behavior. However, when Valentinian recovered his only action was to appoint his son Gratian as “Augustus” (i.e. Emperor-in-waiting), thus indicating who his successor would be.

Despite the boldness of this move, there were many people who doubted whether this was the best thing to do. Had the young Gratian shown signs of being suited for high office, possibly to be attained within only a few years, the senior officials might have had their fears assuaged, but this was not the case. Gratian appeared to have little interest in military matters and his father had great difficultly in persuading the army that his son had the qualities of a potential Emperor.

He took steps to educate Gratian for his future role by appointing the poet and rhetorician Ausonius as his tutor, although this seems a strange choice given that a military-style education would have been more appropriate. Gratian clearly found Ausonius to be a tutor he could get on with, as he appointed the poet to the consulship when he became Emperor.

Gratian married in 374, his wife Constantia being the daughter of a former Emperor (Constantius II). She died in 383, shortly before Gratian himself.

When Valentinian died on 17th November 375, Gratian was declared Emperor as his father had decreed, but this did not please everyone, and particularly not the army commanders in the Balkan region. They sought a leader, albeit only a nominal one, who would allow them to be the real force in the part of the empire that they controlled, namely the eastern part of the Western Empire. Within five days of Valentinian’s death, his son (by his second wife Justina), also called Valentinian, was declared Emperor by the army of that region.

Gratian was therefore left as one of three Emperors, having jurisdiction over Gaul, Spain and Britain. The provinces in Italy, Africa and Illyricum were nominally governed by Emperor Valentinian II, although he was not yet five years old at the time of his accession. The Eastern Empire continued to be ruled by Valens, who was fully occupied in repelling invasions by the Goths.

Despite the fact that the decision to appoint his half-brother as co-Emperor was taken without his consent, Gratian appears to have accepted it without too much fuss, and even took steps to help the young Emperor with his education.

Gratian had problems of his own to contend with, namely incursions by the Alamanni tribe into what is now southern Germany. Although the situation was peaceful at the time of his accession, the Alamanni needed to be watched, which presented a problem when a request came from Valens in 376 for help to repel the Goths in the east. Gratian was willing to help, but his chief general, Merobaudes (who had also been mainly responsible for the appointment of Valentinian II), disobeyed Gratian’s orders and held some of the legions back in order to guard the border against the Alamanni. The fact that Merobaudes could get away with this shows that Gratian was not strong-willed enough for the job of Emperor, although the actions of Merobaudes were probably correct under the circumstances.

In late 377 Gratian prepared to set off east to help his uncle against the Goths, but this was the signal the Alamanni had been waiting for. They invaded in February 378 but the legions left in place by Merobaudes were able to deal with the threat, with some 30,000 Alamanni being killed in battle at Argentovaria (near Colmar, France).

With his own borders secure, Gratian could now provide the assistance that Valens had asked for, but the latter seems to have changed his mind and decided to take on the Goths without waiting for his young nephew (still only 19 in 378) to arrive. The result was a devastating defeat at Adrianople at which two-thirds of the Roman army, and Valens himself, were killed.

Gratian was now left as the senior Emperor in the whole of the Roman Empire. However, he clearly needed help and he called on a Spanish general, Theodosius, to assist him. This was an interesting choice, because Theodosius’s father, also called Theodosius, had fallen foul of Merobaudes during the reign of Valentinian I and had been executed following a trumped-up charge of treason. The appointment may have been partly a move by Gratian to assert himself against Merobaudes.

Theodosius allowed himself to be declared Eastern Emperor by his troops, and Gratian did not oppose this move. It at least allowed him to carry on with the more peaceful life of being Western Emperor.

Gratian, who like all the Emperors since Constantine was nominally Christian, now interested himself in Church affairs. In 381 he moved his capital from Trier (in Gaul) to Milan, where Ambrose had earlier been appointed bishop with the Emperor’s help. Gratian involved himself in the debate between orthodox Christians and the “heretics” who followed the teachings of Arius. He was persuaded by Ambrose to call a council of bishops to debate the matter, and this convened at Aquileia (in northern Italy) in September 381. Ambrose made sure that the decision that was made favoured his position and had the Emperor’s backing.

Gratian continued to support Theodosius in the east, by sending troops when needed, but the support was not reciprocated. In 383 the commander of the British garrison, Magnus Maximus, revolted against Gratian and invaded Gaul, where he was supported by Merobaudes. Theodosius indicated that he would not oppose the revolt, and Gratian was subsequently defeated and forced to flee. His pursuers caught up with him at Lyons and he was killed on 25th August 383, aged 24.

Gratian’s career as Emperor was not a particularly distinguished one as he simply did not have the qualities needed to be a strong Emperor. In his defence it could be pointed out that, during the turbulent times of the later Roman Empire, there were very few men who did have those qualities.