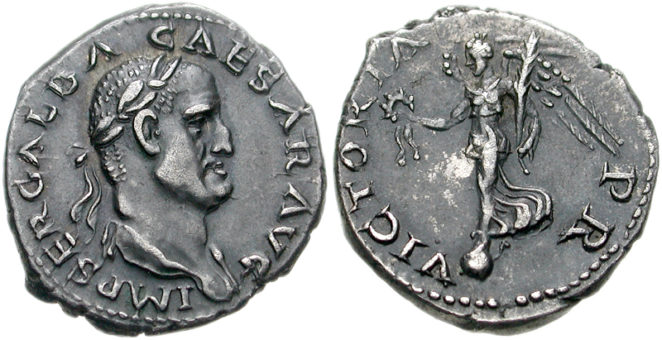 Servius Sulpicius Galba was the first of four Roman emperors who reigned during the year 69 AD, three of whom were murdered in office by soldiers loyal to their successors.

He was born into a wealthy family on 24th December 3 BC near Terracina which is on the Italian coast south of Rome. He appears to have been a young man of exceptional talents, as both Augustus and Tiberius are said to have predicted that he would become Emperor of Rome. He became a praetor (an elected magistrate) at the age of 23 and a consul when he was 36. In 39 AD he was appointed governor of Gaul, where he campaigned against the Germans.

When Caligula was overthrown in 41 AD Galba was urged by some to seize the Empire, but he preferred to bide his time and was content the serve the new emperor, Claudius, being appointed to govern Africa in 45 AD, which he did with wisdom and integrity.

During Nero’s reign (54-68 AD) Galba preferred at first to stay away from high office, out of suspicion of what the tyrannical and unstable emperor might do next, but in 61AD he accepted the governorship of a province in Spain, where he remained for eight years.

In 68 AD Julius Vindex, governor of part of Gaul, rose in rebellion and Galba also learned that Nero had given orders for his own assassination. He therefore joined the revolt of Vindex, who did not want to be emperor himself but instead offered to place Galba on the throne. When Vindex was killed in battle, and Nero committed suicide, Galba proceeded to Rome, where he was declared Emperor.

However, once installed as emperor Galba soon proved himself to be unworthy of the office, being severe and avaricious, and he quickly lost popularity, especially with the soldiers. For one thing he was now 71 years old, which was way beyond the normal life expectancy of the time and he no longer had the personal powers that were needed to run a vast empire. For example, he had to be carried in a litter towards the end of his life and reign because he could no longer walk unaided. He also made the mistake of listening to bad advice from a number of trusted favourites.

Seeing the weakness of his position, he adopted Piso Licinianus as his successor, which angered Marcus Salvius Otho, who had supported Galba’s rebellion against Nero and had expected to be named as Galba’s successor. Otho conspired with the army so that they mutinied six days after Galba’s decision. This was followed by Galba’s assassination by his soldiers on 15th January 69 AD and the declaration of Otho as the second of the four emperors of that year.

Galba’s chief distinction was that he was the first Roman emperor not to be related, by birth or adoption, to the Julio-Claudian clan that had ruled the Empire since its inception. However, he came to office far too late in life to be able to handle the imperial office or to resist any challenge to his position. Like many emperors who were to follow, he was entirely at the mercy of his army; once their support was lost, so was his life. He fulfilled the early prediction that he would become emperor, but this was only achieved for seven months at the end of a long life.