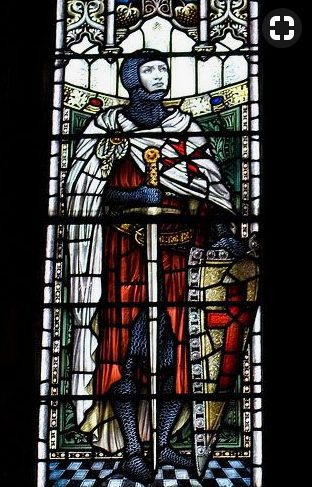 Along and foremost among all the Knighthood Orders of the medieval ages stand the Templars or in French “les Templiers.” Their story is one of the most told and read across the ages. In this post, I will attempt to tell that story and entertain you with some of the controversies and myths about the Knights Templar (Templiers).

However, before I start this article, I want to warn the readers: various legends were born around the Order of the Temple or the Knights Templars after their demise and they have no relevance to the history of the Order and they belong rather within the domain of myths and folklore. I will attempt to demystify and separate the historical facts and the mythological saga of the Knights Templars’ real life story.

The origins of the Knights Templars came along with the impetus of Crusades where chivalry and knighthood are going to know their hours of glory and assert their nobility throughout all of Europe during the Middle Ages.

The pope Urban 11 preached the first Crusade on November 27, 1095 in the tenth day of the Clermont’s Council. The motivation behind the pope’s action to see such a military expedition taking form came due to the fact that the Christians pilgrims heading for Jerusalem were often victims of acts of violence and even outright assassinations. With this in mind, the Pope asked the Christians of Europe to take arms in order to help the Christians of the East. This crusade rallied behind the words of “God wants this!” and everyone who participated in the Crusade was blessed with the sign of the Cross and became a crusader. This action ended on July 15th, 1099 by the taking of Jerusalem by the Christians troops of Godefroy de Bouillon. Godefroy de Bouillon was designed as King of Jerusalem by his peers but he refused that name preferring the title of Confessor of the Holy Sepulcher.

When the “Hospitaliers” Order, recognized in 1113, was charged to take care of the pilgrims coming from the West, an idea surfaced: to create a militia of Christ (militia Christi) whose main goal was to protect and maintain the safety of the community of the Holy Sepulcher and the pilgrims on the Holy Land roads who were often prey to thieves and bandits.

With this organisation, the clergy would take care of the lithurgical affairs, the Hospital Order takes in hand the functions of charity and the militia of Christ which was purely military would protect the pilgrims. This three tier division of the tasks reproduced the basic organisation of the medieval society that was composed of priests (oratores), of warriors (bellatores) and the peasants (laboratores).

The birth of the Order of the Temple followed this division of tasks and power. It is around 1118 (date conventionally recognised) that was born, under the impulse of Hugues de Payns and Geoffrey St-Omer, the militia of the Poor Knights of Christ and of the Temple of Solomon (in latin: pauperes commilitiones Christi Templique Solomonici) that had for mission of securing the voyage of the pilgrims of the West since the reconquest of Jerusalem.

At first Payns and St-Omer focused their ardour on the Athlit corridor, a particular dangerous place on the route taken by the pilgrims. Subsequently, one of the largest Templar stronghold in the Holy Land was built in this place under the name of Château (castle) Pélerin. But the new Temple Order could only survive with the support of influential people and supporters. Hugues de Payns managed to convince the king of Jerusalem, Beaudoin 11, of the usefulness of such a militia, something that was quite easy to do given the insecurity reigning in the region at that time.

The knights had to take the three vows of poverty, chastity and obedience. They received from the Patriarch Gormond the mission of “guarding the ways and the roads against the brigands for the salvation of the pilgrims” and for the remission of their own sins. King Beaudoin 11 also gave them part of his palace in Jerusalem , on the site of Solomon’s temple, which later gave the name of Knights Templars or the Knights of the Temple.

The new Order needed much more support and had to grow. Also the notoriety of the new Temple Order could not extend itself beyond the Holy Land and that is why Hugues de Payns, accompanied by five others knights decided to return to the West in 1127 in order to get a message to the pope Honorius 11 in favor of the Temple Order. With the support of Beaudoin 11 of Jerusalem, Hugues de Payns had three objectives to fill: 1) to have the Order of the Temple recognised by the Catholic Church and give it a rule to follow because as of now, since they were attached to the Holy Sepulcher, the knights were also following its rules based on St-Augustin, 2) obtain a legitimate vision of knighthood in regards to the actions of the Knight-Monk as this was a fairly new appelation that could come in conflict with the rules of the catholic Church and the society, in general, 3) recruit new Knights and obtain more funds to help the Order to survive in the Holy Land. The voyage took the six knights first to Anjou, the Poitou, followed by Normandy and England (from where they received many donations), followed by Flanders and then Champagne.

At the end of this voyage and after having carried the message of the King of Jerusalem to Bernard de Clairvaux in order to obtain his help to present the demands of the Templars to the pope, Hugues de Payns participated in the council of Troyes. The council led to creation of a rule specifically prepared for the Order of the Temple, which had a strong Cistercian inspiration, contrary to the Clunians who followed the rule of St-Benoît and the rule of Saint-Augustin. The new rule for the Templar Knights became a mix of the three rules to adapt itself to the life of the Templars which was very active and also militarised. For example, fasting was less severe than for the Benedictin Brothers so as not to weaken the Templars if and when they were called in to fight.

Other rules were added to the way of life of the Templars. The predominant one is this one: “The Knights of Christ gives death safely and receives it with even more assurance. If he dies, it is for his good, if he kills it is for Christ…”. We must note here that the Knights could only kill non-believers and could not touch a Christian with his sword according to a later edict. Other added rulings were that the Templars were allowed to have their own priest, built their own churches, have their own cemeteries and the right to collect tithings.

This is the first part of the story of the Knights Templar. Hope you enjoyed it. Stay tuned for the second part which should come up by the end of January (I hope).