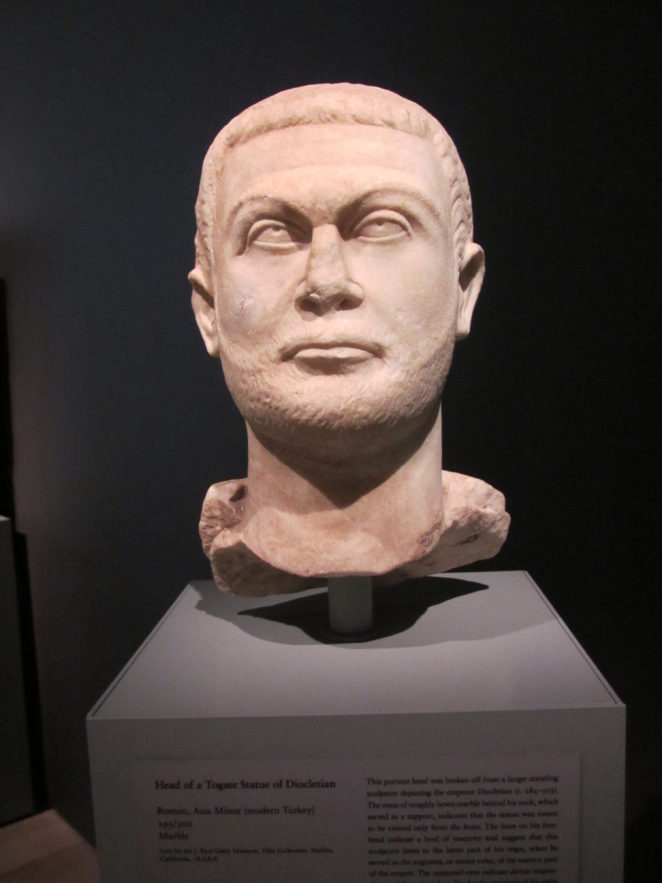 Diocletian was one of the more effective later Roman Emperors and also had the distinction of being the only Emperor to abdicate his throne voluntarily.

Gaius Aurelius Valerius Diocletianus was born in Dalmatia, probably in 245, of obscure parentage. He had a career in the army under Emperors Aurelian, Probus and Carus, and was on campaign with Carus in Mesopotamia in 283 when the latter died suddenly. Legend has it that his tent was struck by lightning, but this could be taken as meaning that he was murdered by mutineers.

Carus had two sons, Carinus and Numerian, the latter of whom was on campaign with him while Carinus remained at home. Numerian was murdered in the summer of 284, but his assassins had no idea what to do next and pretended that their victim was still alive but suffering from an eye infection that prevented him from appearing in public. Eventually the stench from the rotting corpse became too powerful to ignore and the senior officers realised that they had to choose a compromise candidate for Emperor to set against Carinus.

The choice fell upon a mid-ranking officer named Gaius Aurelius Valerius Diocles who took the name Diocletianus that is commonly abbreviated to Diocletian. His first act as Emperor was to take his sword and kill the praetorian prefect Flavius Aper whom he accused of the murder of Numerian.

In 285 the forces of Diocletian and Carinus met in battle at the Margus River in Moesia (modern Serbia). The battle was going in favour of Carinus when some of his troops mutinied and he was probably murdered by someone on his own side. Diocletian was now undisputed as Emperor.

Despite being unchallenged, Diocletian was wise enough to realise that things were unlikely to stay that way. Past history showed that, with Emperors having to be constantly on the move to defend the frontiers at one point or another, the close relationship between the governing class in Rome and the Emperor’s inner circle was breaking down. Without this communication there was every chance of factions arising that would foment rebellion and civil war. It was impossible to have a mobile Emperor and stable central authority at the same time.

Diocletian therefore took steps to devolve his authority by sharing power on a regional basis. He married one of his daughters to an officer called Maximian who was then made Augustus with dominion over the western provinces of the Empire, although it was made clear that Diocletian, in the east, would have seniority over him. Two junior Emperors, with the rank of Caesar, were also appointed later on, these being Flavius Constantius and Gaius Galerius. Constantius acted as deputy to Maximian and Galerius worked with Diocletian. The juniors also established a family relationship with their bosses by marrying their daughters. This four-way arrangement is known to historians as the Tetrarchy.

Diocletian also established new power bases for the Empire, with the emphasis being taken away from Rome itself. He established himself at Nicomedia in northwestern Turkey, and only visited Rome twice during his 21 years as Emperor. Other centres were where the Emperor, junior or senior, chose to reside, with palaces being built at Sirmium (Serbia), Aquileia and Milan (northern Italy), and Trier in Germany.

Diocletian went further by subdividing local government into twelve “dioceses”, equally divided between the eastern and western halves of the Empire. Although these enabled power to be devolved away from Rome, they increased the overall bureaucratic burden of running the Empire and also had the long-term effect of weakening its overall cohesion.

Another reform was to create a civil adminstration that was no longer dominated by the super-rich. This had been made easier by the hyperinflation of previous reigns, so that the huge fortunes of those at the top were now worth much less, and property valuations that had previously defined the class structure were now meaningless. It was therefore possible for people of relatively modest means to gain high office.

Reforms were also made to the legal and taxation systems, and Diocletian tried to institute economic stability through an “Edict on Maximum Prices”, although this proved to be a failure because it ignored some of the basic laws of supply and demand.

Persecution of the Christians

Despite his well-deserved reputation for clemency and humanity, Diocletian was not above persecuting Christians. In February 303 he issued an Empire-wide edict that ordered all Christians to sacrifice to the traditional gods, with severe punishments threatened for those who disobeyed. However, the tetrachs differed in their application of the edict, which ceased to be enforced after about 18 months. It was in any case becoming very difficult to enforce such edicts in a world where Christians had infiltrated institutions including the army, the imperial court and higher education.

In 305, having reached the age of 60, Diocletian decided to retire. His plan was that he and Maximian would retire at the same time, leaving the junior emperors to step into their shoes, with two new men appointed as Caesars (Maximinus Daia and Flavius Valerius Severus). Maximian was not overjoyed at the idea, but he had no choice. At a ceremony on 1st May the two senior emperors abdicated.

Diocletian retired to a palace in his native Dalmatia where he enjoyed his later years growing vegetables in his garden, but he was to be called upon again to settle the power balance of the Empire.

Diocletian’s legacy should have been a degree of stability that the Empire had not known for a long time. However, despite the apparent elements of devolution, the arrangements under the Tetrarchy still depended on each member conceding that the ultimate decision-making power lay with one man. Once that man had gone, it was open season again for ambitious men to grab as much power as they could.

Galerius found that he did not have the authority of Diocletian to assert himself over other claimants, notably Maxentius who was the son of Maximian, who in July 306 came out of retirement to support his son’s claim to be Emperor after Constantius’s son, Constantine, had been declared Emperor on the death of his father. Galerius called on Diocletian to come to his aid.

Diocletian presided over a conference at which Galerius ended up being recognised by all parties as the senior Emperor. However, there was no guarantee that future trouble of a similar kind could be avoided without bloodshed, and this was indeed what was in store in later years.

Diocletian died in 313 (this is not certain, it could have been earlier) at the age (probably) of 68.