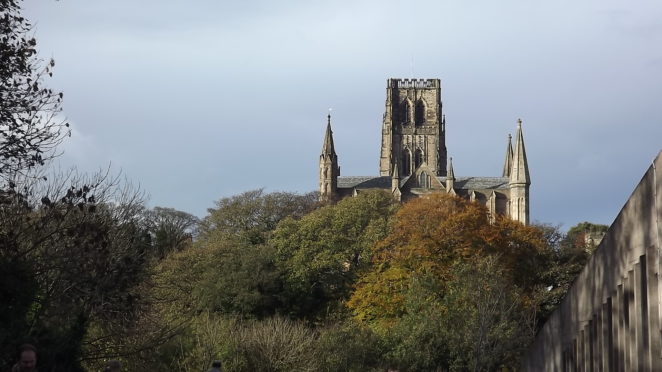 The Bishops of Durham, in the north of England, used to be more than just the chief priests in charge of a large diocese and a magnificent cathedral. They were designated “Prince Bishops” who were virtually rulers of the northern counties on condition that they kept the Scots at bay. They therefore wielded considerable power and were able to amass vast personal fortunes.

However, this was not enough for Bishop Foxe, who was the Prince Bishop of Durham from 1494 to 1501. What he wanted most of all was a hot dinner!

One consequence of being in charge of a large cathedral, together with the castle that shares the same site on a promontory overlooking the River Wear, is that you also have a live-in staff of several hundred people to manage and, more importantly, to feed. They would all gather in the great hall of the castle, where the bishop and his senior staff would sit in high-backed chairs at the high table and the lower orders would sit on benches along each side of long tables that stretched right down the hall.

Every night the bishop and his entourage would sweep into the hall after everyone else had assembled and be the last to take their seats. Naturally enough, they would be first to be served their food, with the rest of the company having to wait their turn.

And that was where the problem arose, before nobody could start to eat until the bishop had blessed the food. The blessing could not be given until everyone had been served, and that included the bishop himself. By the time he could give the blessing the bishop’s plate had – as often as not – gone cold.

So Bishop Foxe came up with an ingenious solution. He reckoned that what was important was that the blessing had been given, not necessarily that he had given it. He therefore had the words of the blessing inscribed on the archway that led from the kitchen to the great hall, and under which every plate of food had to pass.

His food arrived first, but it had already been blessed – in his opinion – by passing through the archway inscribed with the blessing. He could therefore tuck in with a clear conscience as soon as the plate was placed in front of him. Problem solved!

The archway, with the blessing, can still be seen today by visitors to Durham Castle.